Despite the ongoing police siege of Hong Kong's Polytechnic University and a growing number of injured protesters, the predicted mainland intervention against the 6-month old protest movement is unlikely to happen, says Prof. Sean Starrs from Hong Kong.

Despite the ongoing police siege of Hong Kong's Polytechnic University and a growing number of injured protesters, the predicted mainland intervention against the 6-month old protest movement is unlikely to happen, says Prof. Sean Starrs from Hong Kong. 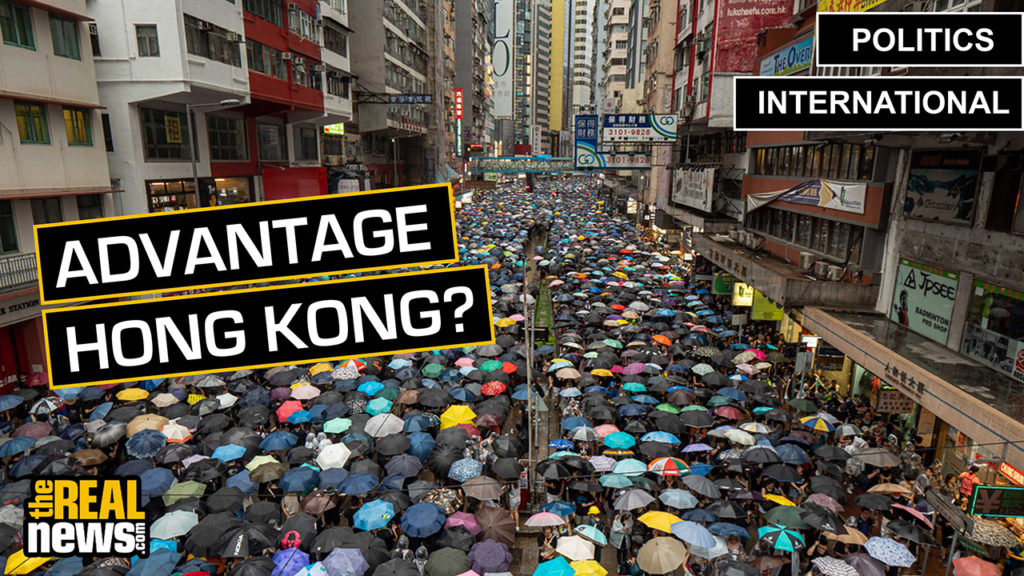 After nearly six months of almost continuous protests, the confrontation between the Hong Kong protest movement and state authorities is becoming increasingly intense. Police laid siege to Hong Kong’s Polytechnical University over the weekend, the city’s largest university where many of the protesters have ensconced themselves. Last Sunday and Monday, about 150 protesters were injured in protracted confrontations with the police. The total number of protestors arrested since the movement began last June has reached almost 5000, 400 alone in the past 24 hours.

The protest began over rejection of an extradition law that mainland China had sought from Hong Kong. However, in reaction to the protests, Hong Kong governor Carrie Lam shelved the plan within a few weeks of proposing it and since then has completely withdrawn it. The leaderless protest movement has continued though.

Joining me to take a closer look at the recent developments in Hong Kong is Sean Starrs. He is an Assistant Professor of International Relations Department of Asian and International Studies at the City University of Hong Kong. He joins us from that city. Thanks for joining us again, Sean.

GREG WILPERT: So tell us about the situation in Hong Kong at the moment. Are the protests limited to the Polytechnical University where the police are clashing with students, or are they more widespread? And what is the mood in Hong Kong more generally after six months of protests?

SEAN STARRS: So all throughout last week and continuing till Monday, us office worker–like finance workers, lawyers, accountants, et cetera–in Central, the main business district, on their lunch breaks were actually protesting and some of them setting up barricades. And even a city bank executive was wrestled to the ground and arrested. But I just went through Central today during lunch and there’s a heavy police force all around Central, so I didn’t see any protests today. So that lasted throughout the week last week and then yesterday.

And during the siege of Polytech University, which started Sunday evening local time, there were lots of protestors that were trying to draw attention away from that siege. So they were throwing Molotov cocktails around Kowloon, which is where the university is, and trying to set up barricades and so on to draw the police away to help the protesters. And there were a variety. I mean, there was a sit in by the parents of the students that were still stuck inside, the Catholic Bishop got involved. So there’s quite a cross section of society that’s trying to de-escalate and end this siege. And even though of course many say that they’re against throwing Molotov cocktails at police and so on, many do support the general cause still.

GREG WILPERT: According to most reports, the protest movement is basically leaderless, so it has been a bit difficult to figure out what the protesters want. As I mentioned, they began though with a demand for the withdrawal of the extradition law. Now, given that Hong Kong Chief Executive, Carrie Lam, has completely withdrawn the law from the legislature last month, what are the main demands at the moment?

SEAN STARRS: Well, the five demands have stayed the same since June or July. So first is to withdraw the bill, so that’s succeeded. Also to not designate June 12th as a riot because that carries a sentence of up to 10 years. Amnesty for everyone arrested. An independent inquiry into police brutality. And universal suffrage. So those five demands have stayed consistent over the months.

GREG WILPERT: Related to the question of demands is the political orientation of the protests. Do they seem to be mostly anti-communist, pro-democracy, anti-capitalist, and what is the role of the left in all of these demonstrations?

SEAN STARRS: Yeah, so there’s still diversity. The left, I mean, certainly the anti-capitalist left, is very small. They’re active in some areas like Mon Kok and so on, but they’re quite small. There’s a large contingent of those who want liberal democracy. So they’re the ones that show up to the rallies in front of the U.S. Consulate. One had about 250,000 people and they were holding posters, for Trump, President Trump, to save Hong Kong. Mike Pompeo, Mike Pence, Marco Rubio, Mitch McConnell, all these people, pleading them to save Hong Kong and pass the bill that’s going through the Senate right now. And then there’s sort of Hong Kong nativists and localists, and even within that group, there is variety. But it’s basically against mainlanders from coming in.

So the Hong Kong government allows 150 mainlanders a day to immigrate into Hong Kong. And so many people feel that there is scarce resources, not enough for everyone and so they want to keep the mainlanders out. And then there’s a more nativist contingent of that, that’s outright racist towards mainlanders that sometimes attack them in the street if they hear them speaking Mandarin, because, of course, Cantonese is official, is the local language in Hong Kong. So there, there’s still a variety, but I mean, from polls I’ve seen, just over 50% of Hong Kong’s population have zero trust in the police. So this idea of an independent inquiry or some sort of truth and reconciliation committee has very broad based support in the movement. And also universal suffrage.

GREG WILPERT: One of the other big questions at the moment is how China will react to this movement, which just seems to continue. The Chinese once suggested the military intervention could still happen. Also, China’s military, which has a barracks of the People’s Liberation Army in Hong Kong, could be seen on the streets of Hong Kong for the first time in over 20 years, even though they did not intervene in the protests. Why do you think President Xi Jinping has not intervened yet?

SEAN STARRS: I just want to make one little correction. So the PLA, the People’s Liberation Army did leave their barracks actually last year during a typhoon. So they helped with the cleanup during the typhoon. So that was the first time since 1997 that they left their barracks. So on Saturday, I was there at Baptist University. So there’s a number of barracks around Hong Kong, but there’s one barrack in particular near Baptist University. And it’s there where a bunch, including from the Special Operations Force, voluntarily went out and cleared the road.

But in broader terms of why don’t the tanks roll in; China depends on global capitalism much more than it did in 1989, so Hong Kong is still crucial even though Hong Kong’s GDP is a much smaller share of China’s now. So in 1997, Hong Kong’s GDP was about 20% of China’s and today it’s about 3%. Hong Kong is still a crucial gateway for Chinese capital to raise U.S. Dollars on the Hong Kong markets. Hong Kong is crucial if China wants to continue to internationalize its currency, the RNB, that has to be done through Hong Kong. And it’s crucial for foreign investors, Western investors, Wall Street, and so on. J.P. Morgan Chase has a big shiny tower in Central. Hong Kong is crucial for them to invest in China.

So Shanghai has capital controls and so they opened up a financial free trade zone in Shanghai and Pudong I think a couple of years ago now. It’s been a complete flop because they can’t completely eliminate capital controls like Hong Kong has because the Chinese Communist Party depends on control of finance in China for its power. So they will not eliminate capital controls and they will likely not have a freely convertible currency. So Hong Kong still plays this crucial role as China is far more dependent on global capitalism today than it was 30 years ago. So if the tanks do roll in, that would end the one country, two systems. But there is, on the other hand, I mean, it’s very unlikely they’re going to let the PLA start shooting people, massacres, whatever.

Also, people talking about the People’s Armed Police, the PAP, they’re kind of a paramilitary force. They’ve been amassed across the board in Shenzhen since August. But it’s also very unlikely for them to come in as well, I think. So it’s unlikely that the security apparatus will increase its repression, but they’re kind of peeling the cabbage one leaf at a time. So the latest example is the Hong Kong High Court has said that the anti-mask ban, which was passed about a month ago, is unconstitutional for Hong Kong’s basic law. But the National People’s Congress Standing Committee in Beijing has said only they can rule whether something is unconstitutional, the Hong Kong courts don’t have that kind of jurisdiction.

And then you mentioned the PLA troops on Saturday that helped with the cleanup. They’re allowed to leave their barracks if the Hong Kong government explicitly invites them to. But they were not invited to, they volunteer to leave. And so that’s kind of normalizing the PLA troops on the streets of Hong Kong. And it played very well in the mainland. So it was filmed by a PLA crew. So I was there. I saw it. It was filmed by a PLA crew and that’s gone viral around China. So it’s a very, very popular move in the mainland. So it’s normalized the PLA troops, but I do not think they will be involved in direct repression even at this late stage.

GREG WILPERT: I was speaking to Sean Starrs, Assistant Professor of International Relations Department of Asian and International Studies at the City University of Hong Kong. Thanks again, Sean for having joined us today.