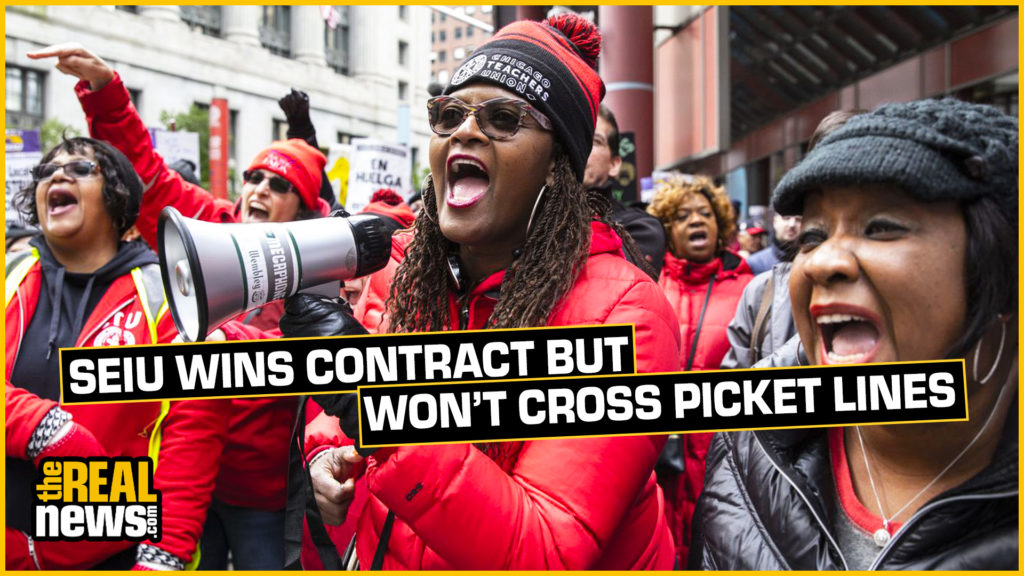 Chicago is once again the center of a fight for the future of public education. On Tuesday, teachers entered their ninth day of a strike over compensation, classroom size, and much more; with reportedly no end in sight to their longest work stoppage in decades. The Chicago Teachers Union says the country’s third largest school district can do more and spend more to support teachers and students. Here’s a clip.

JAISAL NOOR: For years, Chicago was a testing ground for policies like mayoral control, charter school expansion, and school closings. But ever since a grassroots caucus won power in 2010 the union has been leading a fight against those policies. Meanwhile, school support staff with SEIU Local 73 who are striking alongside with teachers reached a tentative deal to end their strike on Sunday.

Joining us to discuss this is Jeffrey Howard. He’s Executive Vice President at SEIU Local 73. Thanks so much for joining us.

JEFFREY HOWARD: Thank you for having me.

JAISAL NOOR: So can you start off by telling us about the deal that was reached? We’re reading in some reports that the district promised something like a 16% pay raise over five years, the same deal they made to CTU.

JEFFREY HOWARD: So I don’t want to get into the absolute specifics of the contract. I will say our negotiating committee was very satisfied with the raises that were proposed. We had a lot of changes in steps and different things that sort of lift the bottom up, lift our lowest paid workers up. It gives them a measure of dignity and respect and it’s a good first step to getting them out of the cycle of poverty being the working poor. So we’re currently in ratification mode. We’ve met with probably about 1500 to 2000 of our members already to have them go over the details of the contracts. So I don’t want to get into the details of it until everyone’s had an opportunity to hear the details from the perspective of those that negotiated on their behalf.

JAISAL NOOR: And I understand that you’ve reached a deal with Chicago public schools that no action will be taken against an SEIU Local 73 member who wishes to remain on the picket lines and out work until, classes resume because the teachers are still on strike.

JEFFREY HOWARD: Absolutely. And I think that was one of our main things. Like we all went out together, us CTU, and we also had the Chicago park district employees who settled their contract on the eve of the brink of a potential strike. But one of the things that was important for us, and we made no bones about it to the mayor, was that our workers will not cross the picket line and should not be forced to have to cross a picket line for the brothers and sisters with whom they support it. And they were in agreement with that. And so our workers will be out until CTU gets the contract that they think their members deserve.

JAISAL NOOR: And I know that I’m SEIU and the Chicago Teachers Union, they’ve been fighting sort of the same issues. I remember in 2013 I covered a big protest against school closings in Chicago. I think dozens of schools were on the chopping block. And this is under the previous mayor, Rahm Emanuel, but SEIU members were getting arrested in civil disobedience alongside teachers and other members of the Chicago community.

Can you talk about how the work that you’re doing is sort of related to the work that the teachers are doing and the fight they’re making over not only pay, but these bigger issues that Chicago being one of the most expensive cities to live in? You’re talking about the working poor; it’s increasingly difficult for working people to afford cities like Chicago.

JEFFREY HOWARD: Absolutely. And especially for our members. When you have like a bus aide for example, who was making around potentially $16,000 a year. Many times some of them actually having to live in their cars over the summer when school break is out because there’s not enough pay. But I also think there are overarching issues about class size, nurses in schools, librarians in schools that have a real effect on a child’s day to day life. For our members that seek us. We represent the most vulnerable children in school.

And it was really important that one, the mayor and CPS understood what our workers did every day, how they were vastly underpaid for what they did, and then how we then rectify those issues along with the larger issues. Because this is really about public education. 80% of the children that attend Chicago public schools are black and brown children and 80% of the members who we represent are black and brown members, predominantly women who work these jobs.

So this is larger. This is not just about the workers at CTU, but it’s about a fast food worker. It’s about a CNA who works at a hospital who’s barely able to make ends meet. It’s about all low wage workers, all work that has been underappreciated. And these workers have been invisible for years. And I think this is going to be a catalyst for that action because we hear from workers all over the city and all over the country who are thanking the members of CPS and CTU for this broader fight that we’re taking on about making sure that there are good jobs for all workers who work in this country.  I think this is the broader fight that we’re fighting right now. And that’s what these contracts and that’s what this contract fight. And that’s what this unity between SEIU and CTU has really been all about.

JAISAL NOOR: So back in 2012 when the teachers went on strike, it really put the strike back on the map as far as education goes. And in the last years and months and weeks, we’ve seen a growing number of strikes around the country. Do you think this power of a strike is being revitalized now in America and what that means for working people in this country.

JEFFREY HOWARD: Like I said, I think this has been a catalyst. Like I said, we’ve heard from workers all over the country. I was recently at a rally. I was recently at a convention in California where we had activists from all over the country. Many of them low wage workers, and they drew inspiration from the work of these courageous CPS workers. Chicago Teachers Union and Local 73 who took the courageous step of walking off their jobs. That’s a big thing for workers, especially those who are living, not just check to check, but day to day, moment to moment and any little thing could spin their lives in the chaos. And they felt like we were ready to take the risk of walking off our jobs.

So the collective action that these workers and this risk and this fight that they’ve taken on has inspired workers, and I think it’s going to change the way collective bargaining is done moving forward. And the collaboration of unions. It took one week when mayor Lightfoot got elected, it took one week for them to decide to give a rich developer 1.5 billion dollars to fund a Lincoln Yards Project and it’s taken 17 months for us to get a contract and CTU still doesn’t have a contract.

And we’re talking about a nurse in every school to make sure that a kid who has an ear infection can learn properly. Or a librarian, because this is a place where children get to expand their horizons outside of the neighborhoods in which they live; that poor workers should not have to make bare bottom wages and they should get a wage, especially those who are taking care of our most vulnerable children in the schools–our special needs children. And we think this is going to be a catalyst to change the way, one, we view public education, but two, the way the marginalized… Specifically Women of Color. A lot of the work that they do has been marginalized, underpaid, and they’ve been invisible and powerless.

JAISAL NOOR: Jeffrey Howard, executive vice president, SEIU, Local 73. Thanks so much for joining us.

JEFFREY HOWARD: And thank you for having me.