Pt 3 of 7. In the continuation of Paul Jay's Reality Asserts Itself interview with Chris Hedges, they discuss the fantasy that we can have everything we want and the reality of the grave dangers facing us

Pt 3 of 7. In the continuation of Paul Jay's Reality Asserts Itself interview with Chris Hedges, they discuss the fantasy that we can have everything we want and the reality of the grave dangers facing us 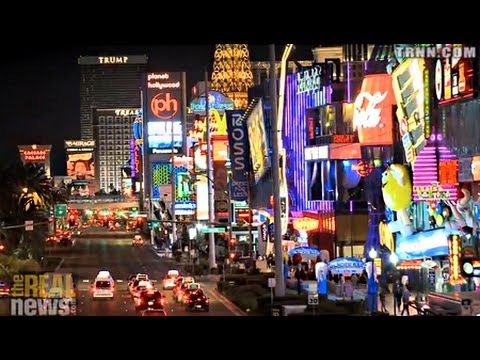 The writer Chris Hedges, talking about the reverend Daniel Berrigan–a life he says we should emulate–wrote this. “Berrigan is one of the nation’s most courageous voices for justice.” And then, quoting Berrigan, Hedges writes, “Faith always starts with oneself. It means an overriding sense of responsibility for the universe, making sure that universe is left in good hands and the belief that things will finally turn out right if we remain faithful.”

Now joining us in Baltimore is Chris Hedges.

CHRIS HEDGES, JOURNALIST AND WRITER: Sure.

JAY: So watch part one and part two. You’ll see the introduction down below is the full introduction of Chris. But by now everybody knows Chris is a great writer. He wrote for The New York Times for 15 years, and now he writes for Truthdig.

HEDGES: In an existential sense, yes. In a practical sense, perhaps not. We are emulating, as anthropologists like Tainter or Redmond or others have chronicled in the collapse of past civilizations, all of the mistakes that complex societies have made over the centuries, 5,000 years of human civilization. And the difference is that this time when our civilization goes down, the whole planet’s going to go down with us. The folly of allowing the fossil fuel industry to determine our relationship to the ecosystem, the folly of embracing an ideology of limitless expansion and consumption, you know, at this point it’s quite clear what the consequences of that will be, and yet we cannot wrest ourselves from these systems or from the benefits that those of us in the wealthy industrialized world derive from these systems.

And I think that Berrigan certainly sees all of that, and yet he makes that leap, which I also make, from the practical to the moral. And as Father Berrigan says, we’re called to do the good, or at least the good insofar as we can determine it, and then we have to let it go, that the Buddhists call it karma, that for us it’s the belief that the good draws to it the good, that rebellion and resistance itself is a moral imperative. And even though empirically everything around us may appear to deteriorate, it doesn’t invalidate that act of resistance.

But, you know, in terms of–you know, I read the climate science reports, including one not long ago by the World Bank which is pretty apocalyptic. I have, I think, you know, especially looking at how past societies and past civilizations have crumbled–. I was studying classics at Harvard. You know, you can look at the fall of the Roman Empire or the Mesopotamian Empire, the Mayan Empire. At the end, your elites retreat into self-protected enclaves, forbidden cities, Versailles, just as our elite has utterly unplugged itself from day-to-day reality. I think a New Yorker writer called it Richistan. They don’t fly commercial airlines. There’s one set of laws and regulations for the 99 percent and a whole ‘nother set of laws and regulations which their lobbyists write for themselves. They live in a kind of parallel universe. They don’t understand. And yet they are the ones who are relentlessly exploiting both human capital and, finally, the environment for short-term profit. I mean, 40 percent of the summer Arctic sea ice melts and Shell oil looks at it as a business opportunity. We’re talking about the death throes of the planet. And they’re dropping one half-billion-dollar drill bit after another. There’s a scramble for the last vestiges of fish stocks, oil, gas, minerals. It’s utter insanity. I wrote a column last week that said, you know–and Melville’s the most prescient sort of oracle in American culture because we’re all on the Pequod, we’re all headed off on this insane quest, which I think in rational moments we even understand will kill us. And yet we can’t free ourselves from it.

JAY: Here’s what Chris wrote. “And so we plunge forward in our doomed quest to master the forces that will finally smite us. Those who see where we are going lack the fortitude to rebel. Mutiny was the only salvation for the Pequod’s crew. It is our only salvation. But moral cowardice turns us into hostages. Moby Dick rams and sinks the Pequod. The waves swallow up Ahab and all who follow him, except one. A vortex formed by the ship’s descent collapses,” quote, “‘and the great shroud of the sea rolled on as it rolled 5,000 years ago.'”

It’s pretty gloomy, the outlook. Some people have critiqued some of your writing, especially more recently, that it’s kind of gloomy, that people are left feeling like the sea is going to sort of overtake us and there isn’t much we could do.

Just one more thing. In the same article about Berrigan, you wrote, “… the failure by large numbers of citizens to carry out mass acts of civil disobedience, will only ensure that we remain hostages to corporate power.” You’re disappointed in not seeing more civil disobedience.

We live in what the political philosopher Sheldon Wolin calls a system of inverted totalitarianism. And by that he means it’s not classical totalitarianism. It doesn’t find its expression through a demagogue or a charismatic leader, but through the anonymity of the corporate state, that in classical totalitarian regimes you have a reactionary or revolutionary party that replaces one structure with another. In inverted totalitarianism, you have corporate forces that purport to be loyal to the Constitution, electoral politics, the iconography and language of American patriotism, and yet internally have seized all of the levers of power to render the citizen impotent, and so that this political theater which we are witnessing is a charade. The Democrats are as beholden to corporate power as the Republicans. The judiciary has become a wholly owned subsidiary of the corporate state.

And our only hope left is to build mass movements of dissent–and I covered the revolutions in Eastern Europe–that can wrest power back from this rapacious corporate elite that quite literally will kill us.

And I see–of course it’s bleak. And, you know, I’m sorry. The climate science reports are bleak. I’m not making it up. And this kind of mania for hope is really a kind of sickness, because it prevents us from seeing how dire and catastrophic the situation is if we don’t radically reconfigure our relationship to each other and to the ecosystem. And so of course people don’t want to hear it. You know, they want to become entranced or mesmerized with the trivia that dominates the airwaves and the sagas and soap operas, and, you know, we are fed this mantra that is really fiction. And the mantra goes that we can have everything we want, that reality is never an impediment to what we desire. And that’s given to us by Oprah, and it’s given to us by Hollywood, and [crosstalk]

JAY: That’s why we’re calling this show Reality Asserts Itself, ’cause you can think that, but–.

HEDGES: Right. And it’s just–it’s a lie. It’s not true. And I think we can’t even use the word hope until we confront reality and begin to resist against the real. If we’re resisting against a fantasy or fiction, if we believe that Barack Obama is going to save us, then, you know, it’s like writing letters to uncle Joe Stalin: if he only knew what they were doing here out in, you know, the Ukrainian wheat fields, where of course millions of people died in the famine, then everything we do is futile. So I think it’s fundamental that we grasp reality in order to build effective resistance. And, unfortunately, reality at this moment in human history is pretty bleak.

JAY: Well, let’s pick that up in the next segment.

So please join us for the next part of this series of interview with Chris Hedges on Reality Asserts Itself on The Real News Network.

January 8, 2020
Sign Up for Our Newsletter
Help Us Make Real News!