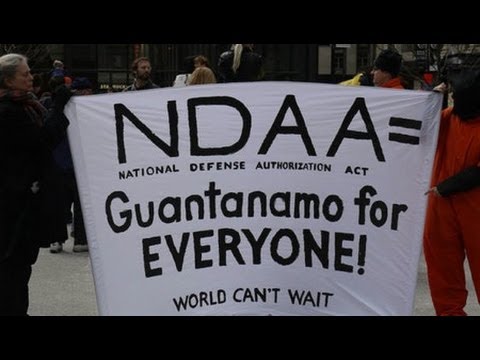 On Friday, September 28, a panel of three judges will review the appeal of a ruling by a judge that said that the section of the NDAA (that’s the National Defense Appropriation Act) that’s the section that’s been very controversial that essentially allows for the military to detain people without trial, people in general (that means citizens and noncitizens), if they are connected with al-Qaeda or, quote, associated with it, whatever that means (and that’s part of what the problem is, whatever that means)â€”.

Well, a legal case that was launched against this section included Chris Hedges, and he now joins us to give us an update on what’s happening. Chris is a senior fellow at the Nation Institute. He writes a weekly column for Truthdig. He’s an author, a best-selling author. His newest book is Days of Destruction, Days of Revolt. Thanks very much for joining us, Chris.

JAY: So where do thingsâ€”first, for people that aren’t up on the case, give us a little background, and then where are we at and what’s happening on this panel today.

HEDGES: Well, on December 31, President Obama signed into law the National Defense Authorization Act, which included Section 1021. Section 1021 permits the U.S. government to overturn 200 years of domestic law and empower the military to carry out policing duties, to detain American citizens, hold them in military facilities, and strip them of due process until, in the language of that section, the end of hostilities, which, of course, is indefinite detention.

In January, the lawyers Carl Mayer and Bruce Afran approached me about suing the president along with the defense secretary over Section 1021 of the NDAA. We brought that case before Judge Katherine Forrest in the Southern District Court of New York. I was eventually joined in that lawsuit by six other activists, including Noam Chomsky and Daniel Ellsberg. The last hearing on the case was in August. And in September, Judge Forrest ruled that Section 1021 was in fact unconstitutional, and she issued a permanent injunction. During the trial, she had issued a temporary injunction against that law while it was being challenged in court.

The Obama administration, which had appealed the temporary injunction, filed an emergency appeal against the permanent injunction. They first asked Judge Forrest to consider a stay, meaning the injunction would go back into effect until it was appealed in the appellate court, which will start hearing it tomorrow, the 28th, Friday, and she refused. They demanded an emergency stay at 9 a.m. the next morning (they filed on Friday, and so it was 9 a.m. on Monday morning). Unfortunately, the appellate court did issue a stay, putting that law back into effect.

Now, why is it so dangerous? It expands the power of the executive branch beyond anything we have seen, including under the authorization to use military force act of 2001, the Patriot Act, even the FISA Amendments Act, which allows for the warrantless wiretapping, monitoring, and eavesdropping of tens of millions of American citizens. And we now know that all our information is being stored out in supercomputers in Utah.

And the language of the section, as Judge Forrest noted in her 112-page ruling, is very vague and very nebulous. It not only permits the military to seize U.S. citizens who have links to al-Qaeda or the Taliban, but [links] to what they call "associated forces". It allows the government to seize citizens who substantially support terrorism activity.

And during the course of the trial, Alexa O’Brien, who was one of the plaintiffs from U.S. Day of Rage, presented to the court email correspondence back and forth from staffers at a private security firm, whichâ€”these emails, 5 million of them, had been leaked by WikiLeaksâ€”which attempted to link U.S. Day of Rage with al-Qaeda. And this is precisely the problem. You pass these laws in the name of the war on terror, and then you use them to criminalize legitimate dissent, as well as criminalize groups in opposition to the ruling elite. It’s something that we saw in the whole long, decades-long battle against communism. It’s exactly the same kind of template. And it allows the government to classify an entire section of the population as essentially outside legal boundaries, I mean, to strip them of due process, strip them of their legal rights. And that’s why this section, 1021, is so frightening.

JAY: And I suppose once you have a section like this and it’s established, you could then pass a little amendment, for example, add Iranian Revolutionary Guard to that list, and maybe you could add some otherâ€”.

HEDGES: But, you know, they don’t even need to do that, because "associated forces" is a kind of catchall whereâ€”you know, what are they? It’s basically anything the government decides is, you know, linked or has within it terrorist intentions can be included. And Judge Forrest pointed that out in her opinion, that the language was purposely so undefined as essentially to empower the government to carry out those kinds of activities against anybody they wanted to.

JAY: Now, the other part of this, which I don’t think has had as much attention as the substantive issue of you can simply detain people without trial, but is that the power was given to the military. I mean, you know, you can imagine you could have said the FBI, you could have said the police that are supposed to be doing this kind of domestic work. But we know (I mean people, those of us who are these kind of wonks that follow this sort of thing) that military intelligence apparently is bigger than all the other intelligence agencies put together. And now we find out they must be extensively operating within the borders of the United States. Otherwise, why would you need legislation that empowers you on American soil?

HEDGES: Well, what was so interesting in the leadup to this legislationâ€”there were a couple of things. First of all, Dianne Feinstein had proposed inserting into this section an exemption for American citizens, which both the Democratic Party and the Obama White House rejected. Secondly, you had the secretary of defense; you had Mueller, the head of the FBI; all of these people went up to Capitol Hill and testified against this piece of legislation, and yet it passed anyway.

And that raises the issue: why? Why was there such an internal thrust to empower the military to carry out domestic surveillance and detention, and, you know, on American soil, potentially on American soil? What is it that’s happening here even when the heads of other intelligence agencies opposed it?

JAY: And what do you make of the timing of this legislation? You know, we’re, you know, more than ten years now from 9/11. You know, by all security analysts who follow this kind of stuff, the threat level’s lower than it’s ever been, certainly lower than it was in the years, you know, just near or after 9/11. Yet now it comes.

HEDGES: Because I don’t think that it’s aimed at Islamic radicals. It’s aimed at domestic dissidents. That’s the point. And that threat is rising as we watch the collapse of globalization, the long-term political paralysis on the part of our corporate state, its inability to deal with fundamental issues that are ravaging American families, whether that’s poverty, chronic underemployment, unemployment. All of those issues, coupled, of course, with the effects of climate change, are leading to a world, both within our borders and outside our borders, of tremendous instability. And you are watching the state accrue to itself through the legal system the powers to essentially keep people in check. And I think that’s the real reason for the NDAA.

JAY: Do you think there’s also possibly another rationale to this, without them saying so? Is this part of preparations for war with Iran?

HEDGES: I don’t think so. I don’t think this has to do with Iran. I think this has to do with internal dissent. I think that, you know, both the lawyers and myself feel that because they issued an emergency appeal, they reacted so aggressively once Judge Forrest declared this section unconstitutional, they are probably already using the NDAA. This is supposition, but probably they are holding dual Pakistan-U.S. nationals in military facilities like Bagram, because if they weren’t using it, they could have just filed an appeal.

The problem is that once the judge declared the law unconstitutional, if they continue to hold American citizens and deny them access to due process, then they would be in contempt of court. And so the rapid response, theâ€”and it was interesting that it was the Pentagon lawyers that filed this emergency appeal. And the issuance of an emergency stay or temporary stay until the appeal is heard I think essentially is to cover them legally for already putting the NDAA into use. Internally, I really think it has less to do with Iran and a lot more to do with controlling the American public.

JAY: Okay. The panel meets today, essentially, as we’re running this story. When do we expect a decision from the panel on whether or not they’re going to find this unconstitutional?

HEDGES: I don’t know, but obviously the government wants to expedite this process. And, you know, it could be a few weeks. If the appellate court upholds Judge Forrest’s ruling, then there’s little doubt that this will end up in the Supreme Court very, very quickly, I mean, in probably a matter of weeks.

JAY: Alright. So we’ll come back to you once we have a decision from the panel. And we’ll obviously keep following this story. Thanks very much for joining us, Chris.