Christopher Hedges, on the sentencing of Jeremy Hammond, says there will be no free press without figures like Hammond and Manning

Christopher Hedges, on the sentencing of Jeremy Hammond, says there will be no free press without figures like Hammond and Manning 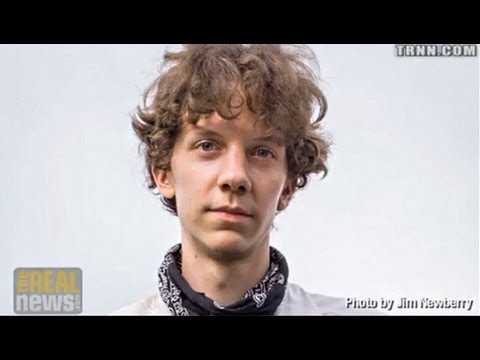 On Friday, Jeremy Hammond, the political and internet activist, will be sentenced. He was charged with hacking into the computers of Stratfor. That’s a political intelligence consulting company that works for various pieces of the military-industrial complex and what many people call the American national security state.

Now joining us in the studio to talk about why the case against Jeremy Hammond matters to the rest of us is Chris Hedges. Chris is a Pulitzer Prize-winning journalist and a senior fellow at the Nation Institute. Along with Joe Sacco, he wrote the New York Times bestseller Days of Destruction, Days of Revolt. He writes a weekly column for Truthdig.

And thanks again for joining us.

JAY: So why does what happened to Jeremy Hammond matter to us? What’s the significance of this case?

JAY: So, quickly, for people–most of our viewers must know this, but quickly, just what is it that Jeremy exposed?

HEDGES: He broke into the private security firm known as Stratfor, which does work for a variety of intelligence agencies–for the Marine Corps and the Defense Department, the Pentagon, but also for corporations, including Raytheon, Dow Chemical, and others. And he turned over 3 million emails, email exchanges within the company to Rolling Stone, WikiLeaks, and other publications.

Now, this was quite a significant dump, because it illustrated two or three very chilling things about the security and surveillance state, first of all that there was no division between corporate spying and government spying. It was seamless, including the same people going back and forth. It was from that dump that we realized the extent to which the Occupy movement was being spied upon and infiltrated and monitored and followed. And we also found from those email exchanges that there was a concerted attempt on the part of security officials, both inside the government and within the private security contracting agency, to link, falsely, nonviolent dissident groups with terrorist groups so that they could apply terrorism laws against these groups.

And when I sued Barack Obama over Section 1021 of the National National Defense Authorization Act, which permits the U.S. military, overturning 150 years of domestic law, to seize U.S. citizens who “substantially” support–that is not a legal term, it’s not material support, it’s an amorphous term–“substantially” support al-Qaeda, the Taliban, or something called associated forces–again another nebulous term–hold those citizens in military facilities without due process indefinitely, part of the email exchanges were entered as evidence in my case. And those email exchanges showed that this private security firm, along with government officials, was attempting to link a group called U.S. Day of Rage, founded by a journalist and activist named Alexa O’Brien, who was one of my coplaintiffs, with al-Qaeda. And why were they trying to link that group with al-Qaeda? So that they could employ the draconian terrorism laws against nonviolent democratic dissidents. That all came out from Hammond.

JAY: And you can see an example of a related thing, the way the British are calling Glenn Greenwald’s partner David Miranda–I think I have the right last name–calling him a terrorist for–.

HEDGES: Right. Well, we have–you know, our most courageous investigative journalists are in self-imposed exile, including Jacob Appelbaum, including Glenn Greenwald, including Sarah Harrison–she’s British–who is now in exile in Berlin because she accompanied Snowden, if you remember, to Russia. She can’t go back into her own country. It is really terrifying.

And when you couple that with the fact that the security and surveillance state has effectively shut down investigation into national security, the national security apparatus by the traditional press, largely through the Espionage Act, but also because we now know that–and more importantly, those who might be whistleblowers know that all of electronic medications are captured and stored in perpetuity by the state, meaning that anyone who decides to reach out to a journalist can be very easily traced and charged. And that is a really, as a journalist, a truly [snip] not a journalist, but I was a former investigative journalist for The New York Times–a truly terrifying development.

JAY: So, Jeremy’s going to be sentenced on Friday. Talk a little bit about him. And what motivated Jeremy Hammond as you know him? You spent some time with him in prison.

HEDGES: Yeah. I was at the Metropolitan Correctional Center in New York where he’s being held on Wednesday with him for the afternoon. He’s not allowed to have social visits because of a series of minor infractions, including his tier getting a hold of some marijuana. But he can see journalists, although it took me two months to get in to see him.

But he’s one of those rare examples of somebody who has these amazing technical skills in sort of being able to hack, but also a deep political consciousness, and a lot of times that doesn’t always go with hackers.

He, as a high school student during the Bush call to invade Iraq, led a walkout of students from his high school. He founded an underground newspaper. He was involved in all sorts of acts of civil disobedience. I think he’d been arrested by the time he was 21 ten times, including protesting against the Republican National Convention when it was held in New York. And he had hacked into a right-wing group–I think it was called Patriot Warrior, and for that he’d gone to prison in Illinois for two years. When he got out, he was–I guess this is in a few states, and Illinois is one of them–they can put you under a curfew in your own house. So from 7 p.m. to 7 a.m., you have to be in your house. So he was living in a curfew.

And from all we can see, and really sort of avoiding the kind of hacking activity that had gotten him into so much trouble–he was working with Food Not Bombs and these kinds of groups and delivering books to prisoners–I mean, he has a real social consciousness–very influenced, by the way, by the old anarchists. He said he made frequent trips to the monument in the Chicago cemetery for the martyrs of the Haymarket labor uprising. Four of them were hanged. Emma Goldman’s buried very close by. Reads a lot, thanks a lot.

And it was 2010, and Chelsea (then Bradley) Manning was arrested for giving those documents and videos to WikiLeaks. And he said that really prompted him, that he knew he had the skills to do something like that and that the act, the courageous act that Manning did and the sacrifice that Manning made prompted him to act, although he knew now, because he could move around, he couldn’t leave his house, he was still living under curfew, that his chances of being caught were high. And yet he went ahead and hacked into the security firm. And he didn’t seek any financial gain. He didn’t get any. I mean, this for me as a journalist is the work of a classic whistleblower who wants to make public information that we have a right to know. It’s our information.

JAY: So the argument you would get from President Obama or his supporters–and this is all being done under the Obama administration, who’s been especially vigorous going after whistleblowers–

HEDGES: Well, not when they shred the Constitution and violate our most basic right to privacy. Not only that, remember that we now know from this information they are actively working to criminalize democratic dissent. That’s a crime. It should be a crime. And whatever crime Jeremy Hammond committed is nothing, pales in comparison to the crimes that are being committed by the state. That’s the point. The same thing with Chelsea Manning. Whatever crime Chelsea Manning may have committed, it is nothing compared to the war crimes in the fraud and the lies that are being perpetrated by the corporate state.

And I think that’s the point, that when you shut down the possibility of a free press, when there is no judicial or legislative oversight–and there isn’t anymore–then the abuse of power becomes rife, especially when you build walls of secrecy. And the last best hope are these people who can break down those walls and make public that information which we have a right to know. We have a right to know that the government is criminalizing our forms of protest and attempting to treat us as if we were terrorists.

JAY: Thanks very much for joining us, Chris.