BP Gets Green Light to Drill in Gulf, But Has Safety Improved? 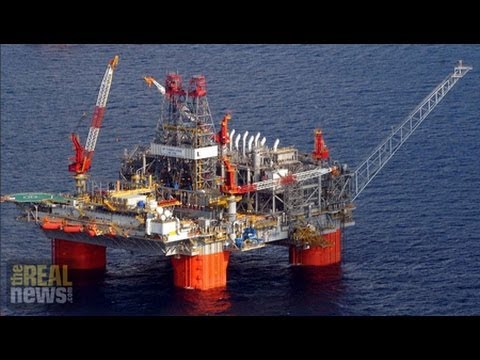 JESSICA DESVARIEUX, TRNN PRODUCER: Who can forget the shocking images of BP’s offshore oil rig exploding and burning out of control in the Gulf of Mexico? It happened on April 20, 2010, in what was to become the largest marine oil spill in history.

Now, almost four years later, BP is drilling new sites in the Gulf, thanks to an agreement with the Environmental Protection Agency, or EPA.

With us to discuss BP’s renewed Gulf drilling activities are our guest. Cherri Foytlin is a freelance journalist and photographer. She is the author of SPILL IT! The Truth about the Deepwater Horizon Oil Rig Explosion. And she’s also one of the founders of the group the Mothers Project–Gulf Coast.

Thank you for joining us, Cherri.

CHERRI FOYTLIN, FOUNDER, MOTHERS’ GULF PROJECT: Thank you for having me.

DESVARIEUX: So, after the disaster, BP pleaded guilty to 11 charges of manslaughter and lying to Congress. Not only was BP fined, but they were also banned from seeking new oil leases in the Gulf of Mexico, and they were barred from new government contracts, essentially. So the company paid about $4.5 billion, the largest fine to an energy company in history, and they say they lost out on potentially billions in government contracts. And according to Forbes, they say that it cost them $42.2 billion.

So, Cherri, my question to you is that some people would argue that justice has really been served in this case. Do you agree?

FOYTLIN: I do not agree, because we are still seeing a large amount of environmental damages here in the Gulf Coast, and the fishing communities are still having low catches, so the communities here and the people here who are dealing with this are continuing to be affected. So until that is cleaned up, I don’t understand why–I feel like–honestly, I feel like we’re an abused child that’s been put back in the hand of the abuser. I don’t believe that BP is going to go out and make everything okay and safe out there. The track record that they have has not proven to the American people or to the Gulf citizens up to this point that they’re serious about making those changes, except for on paper.

DESVARIEUX: Okay. Can you speak to some specific safety regulations that they say they’re going to do but in reality it’s not really transpiring that way?

FOYTLIN: Well, when they made the setttlement with the EPA, for instance, there were several things. They were going to have regulators come out that would check on process safety issues. Well, all I’m saying is after the Texas City accident, where 15 workers were killed there, they said the exact same thing. I looked at the–I was looking at their shareholders agreement that they put out. They put out a report every year. And I laid the one from 2013 next to the one right after the Texas City incident next to the one right after Prudhoe Bay, and it was pretty much the exact same rhetoric. They weren’t even being creative. It was the exact same stuff. And yet these accidents continue to happen, and time and time again.

DESVARIEUX: But I know we were speaking offline. You were saying that you’re still seeing the effects of the oil spill happening, like, there. The wildlife is still being affected.

FOYTLIN: Just a few weeks ago, they found a nine-foot by nine-foot tar mat coming into Pensacola Bay that’s just been sitting out there and breaking up. That was a huge amount of oil that they had to, like, pick up and to escavate when the Coast Guard has let BP off the hook so BP doesn’t even have to clean that up. Now it’s down to the taxpayers in the state of Florida [incompr.] that up.

A week ago, I was on a beach in Elmer’s Island here in Louisiana, and I was stepping over–there were hundreds of tarballs that [incompr.] rolled in. But laced in between those were the carcases of the dead wildlife. And in particular I remember this one pelican that had was [inaud.] had been oiled. But when we reached down to take pictures–we’ve been documenting this for a long time, because someone has to do it. The state isn’t necessarily doing it. BP sure isn’t doing it, and the Coast Guard’s not doing it either. When I reached down to touch the feathers, oil residue came off in my hand. You can smell it, it’s sticky, it’s oil, and there’s no doubt about it.

DESVARIEUX: And just so our audience knows, The Real News did reach out to BP, their press office in Houston, but they declined to comment.

But in BP’s recent press release, it states that, quote, under the terms and conditions of the new administrative agreement, which will apply for five years, BP has agreed to a set of safety and operations ethics and compliance. BP will be required to have an EPA-approved independent auditor, and there will be a zero-tolerance sort of rule for retaliation against employees or contractors who raise safety concerns.

You brought this up earlier, Cherri, the track record of BP. Can you speak to that? Do you think that these safety standards go far enough?

FOYTLIN: I don’t, and I don’t believe that to be in real time. I live in an oil worker community. There’s 9,000 people here, and most of the people here are supported by oil workers. My nephews, my children’s father, they’re all oil workers. And they can tell you when you go out on the rigs that what happens on paper and what actually happens on the rigs is two different things.

There is retaliation. As a matter of fact, my children’s father hasn’t been allowed on a BP rig, when I started speaking out against that. When he goes to his company that he works for, they say BP will not allow him on those rigs. We’ve had bricks thrown through our windows. I know friends that have had concerns about–saying that they’re going to–they’re threatening their children or they’re threatening their animals.

I don’t believe BP for a minute. And we shouldn’t believe BP. They had a felony conviction in 1999. They neglected equipment that caused a spill in 2001 in Prudhoe Bay. They had 42 OSHA violations in 2002, and at that time received the largest fine in OSHA history. They killed 15 workers in Texas City in 2005. They had a similar blowout almost exactly identical to the Deepwater Horizon in 2008. And then in 2010, they killed 11 of our oil-working families out there on the rig and untold others, other people who have had to deal with that deadly toxic dispersant oil mix, that we have people that are still ill from those issues, from those chemicals that are out there. In fact, there was a report released today from LSU that said that the aerosol spray from those chemicals that came off of the waves as they came in were potentially deadly to the cleanup workers. That was actually written in manuals that BP had put together themselves and then were removed before the cleanup workers had a chance to read them. You can go to the Government Accountability Project website. There’s a full report on those workers and the residents that are still dealing with health issues, respiratory issues, heart palpitations. And I mean young children, old people, all the way through.

DESVARIEUX: Looking ahead, Cherri, what’s really next for the communities in southern Louisiana? Are there any lawsuits pending?

FOYTLIN: I’m sure there are lots of individual lawsuits pending. [incompr.] people are still waiting on the settlements. As far as the health claims, there’s yet to be one dollar paid out to any person that’s still dealing with health from the BP oil spill. And they are still dealing with it.

I–honestly, our biggest concern right now is protecting other groups and other communities for having to deal with the very same situation. Unfortunately and sadly, we are very fatalistic in the way we speak down here. We sort of wrote ourselves off to this point where we’re seeing so many cancers now and so many illnesses that our biggest hope is just to keep this from happening to other communities. Like, in Alaska right now they’re talking about using the very same dispersant that they used here up there. And that’s where our fight is headed, because, unfortunately, I do not see where we can go back. The truth of the matter is money cannot clean up oil and money cannot restore the health of a person that’s been affected by toxic chemicals.

DESVARIEUX: Alright. Cherri Foytlin, thank you so much for joining us.

Cherri Foytlin is a freelance journalist, photographer, and mother of six, who lives in South Louisiana – an area inundated with industrial pollution. She is the author of “Spill It! The Truth About the Deep Water Horizon Oil Rig Explosion,” and regularly contributes to www.BridgetheGulfProject.org, the Huffington Post, Daily Kos, and several local newspapers. In…