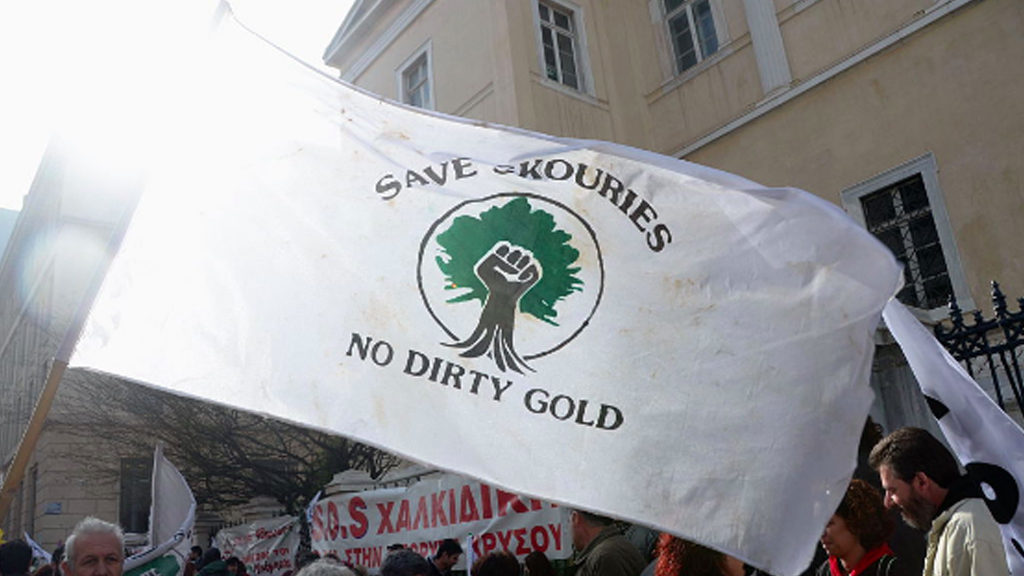 DIMITRI LASCARIS: Canadian gold miner Eldorado Gold has carved an open pit mine out of a pristine, old-growth forest in the Halkidiki region of northern Greece. The local resistance to this mine, called the Skouries mine, has been fierce. It has persisted for years, and in 2013 was featured in the Avi Lewis documentary, This Changes Everything.

As we recently reported at The Real News, dozens of the local activists who have participated in the resistance to this mine have been charged by the Greek state with serious offences in a series of criminal trials. The most recent of those trials began in Thessaloniki, Greece on October 1, and The Real News was there to cover the beginning of that trial. On the day before the commencement of that trial, I visited the site of the Skouries mine and spoke to activist Maria Kadoglou of MiningWatch Greece. Here is what Maria had to say.

So, Dimitri Lascaris for The Real News. I’m here with Maria Kadoglou of MiningWatch Greece. We’re standing in front of the Skouries mine in Halkidiki, a region of northern Greece. This mine is owned by a company called Hellas Gold, which is a subsidiary of Canadian gold mining company, Eldorado Gold. Thank you for joining us, Maria.

DIMITRI LASCARIS: So, Maria, why don’t you tell us a little bit about the status of the mine. What’s going on here currently?

MARIA KADOGLOU: Not much. This mine is currently getting maintenance. Eldorado suspended development of this mine one year ago because they say that the government is delaying in issuing routine permits.

DIMITRI LASCARIS: So, how has the company responded to these delays, what is its relationship now with the Greek government?

MARIA KADOGLOU: Well, for one year they did absolutely nothing, and a few days ago they sent an out of court notice to the Greek government asking for compensation of 850 million euros plus for the delays for lost profits and damages until now, and also 680,000 euros more per day that the required permits are not issued, or else they threatened to take the whole issue to arbitration.

MARIA KADOGLOU: They have not officially responded, but the ministry issued a press release saying that Hellas Gold is required to build a metallurgy plant here in Greece to produce pure metals because this is the contractual obligation. And until now, Eldorado, Hellas Gold, has not been able to prove that their selected technology will, in fact, work in the circumstances here in Greece. And because this is one single project, Skouries and the metallurgy plant, they cannot issue the permits right now. That was in the ministry press release.

DIMITRI LASCARIS: So, I understand that tomorrow, a major trial is going to begin in Thessaloniki, Greece’s second largest city which is not far from here, relating to events that have happened at this mine site. Can you tell us about the trial and the basic allegations of the prosecutors and who is it that they’re seeking to prosecute?

MARIA KADOGLOU: This is about an arson that happened here in Skouries in 2013 where there was property damage, some company facilities were burned. And 21 people are on trial tomorrow. They are being charged with practically half the penal code in Greece; arson, explosion, and also, they are being charged with forming a criminal organization. So, in the view of the justice and the government of that time, the people that were trying to save this place not to be destroyed are a criminal organization.

DIMITRI LASCARIS: So the people, are these people from the area, local residents?

MARIA KADOGLOU: These are all local people from the area that resisted the mine.

DIMITRI LASCARIS: Tell us a little bit about this area. Why is it that this mine has provoked such a strong reaction from the local communities?

MARIA KADOGLOU: Because, as you can see, this is – or was, before Eldorado came – a pristine forest. This is one of the most valuable, in an ecological sense, places in Greece. For Halkidiki, this mountain holds all the fresh water in the area. And so, an open pit mine is really not a very good idea. There has been mining in the area since ancient times, but it was always small-scale and always underground. This is the first mine of this kind in Greece and this is why it has had such a strong reaction from the local people.

DIMITRI LASCARIS: The fact is, however, is that Greece is in an economic crisis. I’m sure that if not at least the current government, prior governments have pointed out this is an important source of employment and revenue for the local economy and the national economy. How do the people here who are opposed to this mine, how do they respond to those arguments?

MARIA KADOGLOU: It has never been proven that this is in the interest of the national economy. In fact, it has been proven that Eldorado has a network of subsidiaries through which they avoid paying taxes in Greece and have their profits go to Barbados Islands instead of being taxed here. Also, we have discussed about the metallurgy plant. The metallurgy plant is a basic requirement of the contract because this is where all government revenues are supposed to come from, from taxing the pure metals. If the company is not able to produce pure metals here in Greece, then there will be no tax revenues for the state. And this is what it’s all about, and this is why it cannot be permitted right away.

DIMITRI LASCARIS: Well, I’d like to thank you very much for speaking to The Real News today.

DIMITRI LASCARIS: And this is Dimitri Lascaris reporting from Halkidiki in Greece.