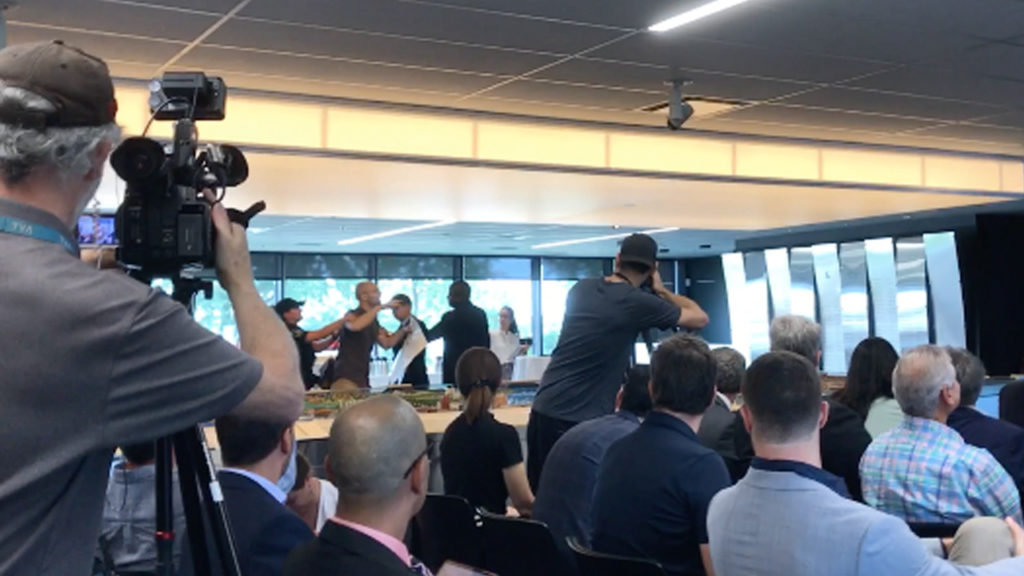 As Canada heads into its next federal election, Canadian Prime Minister Justin Trudeau and members of his cabinet increasingly face criticism from activists for their government’s climate policies, as well as their government’s complicity in human rights abuses by foreign states and other actors. Two particularly controversial aspects of Trudeau’s foreign policy are Canada’s sale of deadly weapons to Saudi Arabia and its unqualified support of Israel. The Trudeau government continues to allow the sale of Canadian-made weaponized personnel carriers to the Saudis, and is doing so despite compelling evidence that those weapons have been used in the Saudi-led coalition’s devastating war on Yemen. And last year, only days after an Israeli sniper shot Canadian doctor Tarek Loubani in Gaza, and Israeli forces gunned down dozens of unarmed Palestinians in the Great March of Return, the Trudeau government entered into an enhanced trade agreement with Israel.

How has the Trudeau government reacted to activists’ efforts to draw attention to these abuses or this disregard of human rights? Well, Justin Trudeau’s government appears to have called in the Mounties. Evidence is accumulating that the Royal Canadian Mounted Police, or RCMP, are using their powers as law enforcement officials to silence and intimidate activists who are vocally critical of the Trudeau government.

One such activist is Yves Engler, a frequent guest on The Real News. Yves is a Canadian commentator and author of several books. His most recent one is Left, Right: Marching to the Beat of Imperial Canada. He joins us today from Montreal. Thanks for coming back on The Real News, Yves.

DIMITRI LASCARIS: Yves, before we discuss the RCMP’s interactions with you, let’s talk about the tactic of direct action. This past week you authored an article entitled, “Time for Direct Action International Solidarity.” Could you summarize for us the view that you expressed in that article?

YVES ENGLER: Yeah, basically people need to be challenging liberal politicians on Canada’s pro-corporate, pro-empire foreign policy. And the way to do so, one of the ways to do so, is to attend press conferences they are giving, attend public speeches they are doing, and make your voice heard. That’s what a number of us have been trying to do in recent months.

YVES ENGLER: Part of it is that he, with regards to Palestinian rights, he is somebody who has been a staunch anti-Palestinian political figure. With regards to the Saudi arms deal, he has in House of Commons responded to questions by the opposition saying that there’s a review of arm sales to Saudi Arabia. From a strictly logistical standpoint, he is a minister here in Montreal, so he’s accessible. We’re able to actually find his meetings. He holds lots of press conferences around here. He also happens to be of high-profile, so there tends to be a bit more media when he’s giving events.

DIMITRI LASCARIS: Let’s watch, Yves, two video clips of recent interactions you had with Minister Garneau. The first clip is one of you challenging Minister Garneau on his support for Israel at a recent press conference at the Port of Montreal. In the interest of full disclosure for our audience, I shot this video and also participated in that disruption. Let’s have a look at what happened.

YVES ENGLER: He doesn’t allow – justifies Israeli violence. Your part of a government signed a free trade agreement that accepts Israeli products from the occupied West Bank. You’re part of a government that’s justifying the massacre of Palestinians in Gaza, that’s justifying the racist laws that Israel’s signing. You should be ashamed of yourself. You should be ashamed of yourself and your government. Shame on you. Free Palestine! Viva la Palestine! [inaudible]

DIMITRI LASCARIS: Yves, the second clip is of you challenging Minister Garneau on Canada’s sale of weapons to Saudi Arabia. This interaction happened on a sidewalk in Montreal after a recent speaking engagement by the minister. Again, in the interest of disclosure, I was the person who shot this video and accompanied you during your interactions with Minister Garneau.

YVES ENGLER: In October 26th, in the House of Commons—

MINISTER MARC GARNEAU: I won’t be answering your question.

YVES ENGLER: [crosstalk] You said that the Saudi arms review—

MINISTER MARC GARNEAU: I won’t be answering your question.

MINISTER MARC GARNEAU: What is your name?

YVES ENGLER: My name is Yves. You don’t want to shake my hand. That’s fine.

YVES ENGLER: So you said that the arms deal’s under review. My question is, it’s almost a year later, where’s that review at?

DIMITRI LASCARIS: Yves, two days ago, following these recent peaceful disruptions of Minister Garneau, you received some surprise visitors at your home in Montreal. Could you please explain to us what happened?

YVES ENGLER: Yeah, two RCMP agents showed up at the door. I wasn’t home. My partner, Bianca, thought it was a package, and so buzzed them up. They walked a few feet into the stairway in the place. Bianca looked down and was very surprised to see two large men in suits. They asked for me. She said I wasn’t there. They then asked who she was. The next day, they returned. The same two officers returned. I wasn’t, again, home. Bianca didn’t want to interact with them. And so she just tried to avoid them, act like she wasn’t there, but they actually stayed for multiple minutes. They rang the doorbell multiple times. To the point where people across the street, at a restaurant across the street, who can actually see into our place from across the street, started looking, so she popped her head down. They were peering in, in the window at the bottom of the stairway. And so, she finally opened the door and they complained that I didn’t call them, even though they never left a phone number.

I see this as a pretty transparent effort to intimidate me out of directly challenging liberal ministers. I think especially in the context of moving towards an election, where there are more and more public events that the politicians are going to be at, and our interventions over the past six months and especially the last multiple weeks have been, I think, frustrating or annoying for the politicians. How I see it is they sent the RCMP to my house to—They didn’t call me. They didn’t email me. They didn’t Facebook message me. They didn’t Skype me to set up a meeting or to have a conversation. They decided to show up at the door, which I think is just an effort to intimidate.

DIMITRI LASCARIS: Do you have any idea how they got your home address, Yves?

YVES ENGLER: I don’t. I don’t know how they got my home address.

DIMITRI LASCARIS: I understand that subsequent to their second visit, you actually did have a phone conversation with one of the officers. Can you tell us about that exchange?

YVES ENGLER: Yeah. I just called the officer to say, “What do you want?” He said he wanted to talk about interrupting Marc Garneau. I said I was not interested in talking about interrupting Marc Garneau. He tried to then continue on with the conversation. I just told him, “I told you I’m not interested in talking about this.” I told him, “Okay, I’m going to hang up now,” and I hung up.

DIMITRI LASCARIS: These two visits to your home are not the only interactions you’ve had with the RCMP over the last few weeks, I understand. Could you tell us about some of the interactions you’ve had with RCMP personnel at events where you either did engage in disruption of a speech by a minister of the Trudeau government, or attempted to do so?

YVES ENGLER: Yeah. About 10 days ago at the Bonaventure Hotel, as I was entering the hotel where Prime Minister Justin Trudeau was giving a speech on Canadian foreign policy, I was called out by an RCMP officer before even entering the hotel. The officer followed me in the elevator down to the lobby floor of the hotel, through the lobby, a long lobby, down escalators to the bottom floor where the event was taking place, and then introduced me to hotel security, which was essentially trying to get the hotel security to say that I wasn’t welcome. The RCMP does not have the right to say I’m not welcome in that hotel, but obviously as a representative of the hotel, the private security does have that right. And so, the private security, basically the RCMP uses it being a private venue to block my ability to see the Prime Minister’s speech or to ask the Prime Minister a question.

DIMITRI LASCARIS: We’ve been speaking to Canadian author and activist Yves Engler about recent efforts of Canada’s Royal Canadian Mounted Police to prevent him from expressing his dissent for government policies at public speaking events. We’ll certainly continue to follow this story and we thank you, Yves, for coming back on The Real News.

DIMITRI LASCARIS: This is Dimitri Lascaris reporting from Montreal, Canada.