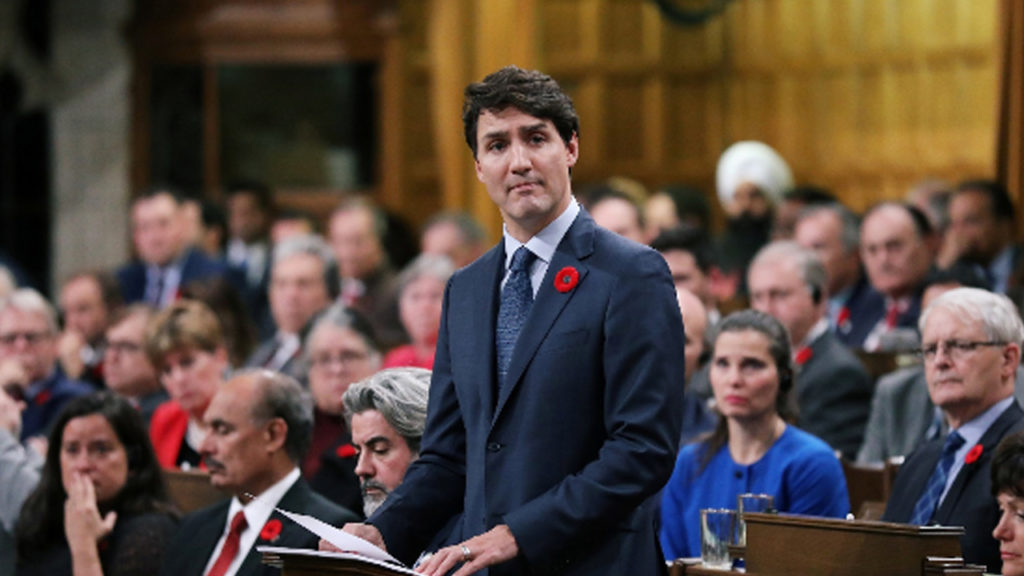 Canada’s prime minister has joined Donald Trump and far right Israeli politicians in conflating support for Palestinian rights and criticism of Israel with violent anti-Semitism. The Canadian prime minister also demonized the peaceful Boycott Divestment and Sanctions movement, BDS, claiming that it is supposedly fueling anti-Semitism. On November 7, Canada’s Liberal Prime Minister Justin Trudeau gave a historic speech in Parliament in which he issued an official apology to Jewish refugees whom Canada turned away at the beginning of the Holocaust. The ship St. Louis arrived at Canada’s shores in 1939, carrying 900 Jewish refugees who were trying to escape the Nazi genocide.

Canada rejected the ship, so too did other countries. Eventually, the ship had to return to Europe, where most of the passengers were subsequently murdered by the Nazis. Canadian Prime Minister Trudeau apologized for Canada closing its borders to the refugees in 1939 and also for not issuing an apology sooner. However, toward the end of his speech, Trudeau suddenly made a turn and started to speak against criticism of Israel. He specifically singled out the Boycott Divestment and Sanctions movement, BDS. This is a peaceful movement for Palestinian rights. Trudeau claimed that it is Israel whose right to exist is most widely and wrongly questioned and he linked this to denial of the Nazi Holocaust.

Trudeau also tried to link criticism of Israel with the kind of murderous anti-Semitism the world saw in Pittsburgh, Pennsylvania, where in a horrific massacre on October 27, a Nazi terrorist attacked the Tree of Life Synagogue, killing 11 Jewish Americans and wounding several more. Here is a clip from Trudeau’s speech in which he tries to conflate violent anti-Semitism with criticism of Israel.

JUSTIN TRUDEAU: Anti-Semitism is still far too present. Jewish institutions and neighborhoods are still being vandalized with swastikas. Jewish students still feel unwelcomed and uncomfortable on some of our college and university campuses because of BDS related intimidation. And out of our entire community of nations, it is Israel whose right to exist is most widely and wrongly questioned. Discrimination and violence against Jewish people in Canada and around the world continues at an alarming rate. Less than two weeks ago, not too far from here, a gunman opened fire on worshippers at the Tree of Life synagogue in Pittsburgh, killing 11 people and wounding six others.

BEN NORTON: So joining us to discuss how Canada’s prime minister is joining Donald Trump and far right Israeli politicians in falsely conflating criticism of Israel and support for Palestinian rights with this kind of murderous anti-Semitism, to discuss this we’re joined by Ali Abunimah. Ali Abunimah is an-award winning journalist and the co-founder of the news website, The Electronic Intifada. He’s also the author of several books, including One Country, and his latest book is The Battle for Justice in Palestine. Thanks for joining us, Ali.

BEN NORTON: So there’s a lot to address here on several different points. What is your response?

ALI ABUNIMAH: Well, whenever it comes, I think it’s right that Canada should apologize and make amends for its racist and anti-Semitic history. And surely, one of the most shameful aspects of Canadian history, which is often by the way whitewashed in comparison to the U.S., Canada tries to market itself as somehow more enlightened than the United States. It’s not true of course. William Lyon Mackenzie King, who was the Canadian prime minister at the time of the St. Louis, was a notorious racist and anti-Semite. And in the phrase of a senior government official at the time in regard to Jewish refugees, the phrase used by the Canadian government is “none is too many.” In other words, they weren’t prepared to tolerate a single Jewish refugee from Nazi Europe.

So it’s right that Canada should make amends and make restitution to the victims of its official anti-Semitism, and of course principally, to its Indigenous people whom it continues to oppress. What is deeply cynical, however, is using this apology to one group of wronged and oppressed people in order to justify and advance the oppression of another group of wronged and oppressed people, in other words, Palestinians. And in the wake of the horrific Pittsburgh massacre at the synagogue by an American Christian white supremacist Nazi, we have seen Israel and its supporters like Prime Minister Trudeau going all out to absolve white supremacists and Nazis and their enablers, such as Donald Trump and his administration, and to shift the blame to the anti-racist left, particularly supporters of Palestinian rights.

It’s an absolutely cynical and disgusting move. But we saw, for example, the Israeli government, top ministers, decrying those, including many in the Jewish community who were pointing at the rhetoric of Donald Trump for encouraging and inciting this kind of white supremacist violence. And we saw some of the establishment pro-Israel Jewish groups in Washington doing exactly the same as Justin Trudeau did, which is to use the outrage and horror at the Tree of Life synagogue massacre to justify further crackdowns on the Palestine Solidarity Movement, which had absolutely nothing to do with it.

And I think it’s also important to point out the background of this, this is going on while Western governments, including Israel, particularly Israel, are encouraging and supporting the growth of Nazism across the western world. So a good example of that is Israel arming the Nazi Azov Battalion in Ukraine. Israeli Tavor rifles are in their hands, licensed by Israel. Of course, the Azov Battalion is now part of the official Ukrainian armed forces, but it is the most fearsome and organized Nazi armed group in the world right now. And what we also revealed at the Electronic Intifada a couple of months ago is that the Canadian government, the government of Justin Trudeau, the supposedly progressive, liberal, diversity-loving government of Trudeau was actually in contact with the Azov Battalion and its military attache in Ukraine was meeting with the Azov Battalion that was photographed with members of this Nazi militia.

So while Trudeau is attacking the Boycott Divestment and Sanctions Movement, the non-violent movement for Palestinian justice, freedom and equality, his government, along with the government of Israel, the United States and the European Union, is actually encouraging and fostering Nazism in Ukraine and other countries.

BEN NORTON: Yeah. And an important point you mentioned, local Jewish leaders in Pittsburgh actually told us President Donald Trump that he is not welcome in their community until he denounces the kinds of white supremacists, who was one of the people who carried out the attack, the Nazi who attacked the synagogue was himself an avowed white supremacist. He was active on alt right forums on the Internet. And this is actually an important point in terms of looking at the rhetoric of Trudeau and Trump. After last year, when a Nazi drove a car into a crowd of anti-racist protesters in Charlottesville, killing a young woman, Donald Trump claimed that there was blame on both sides, thereby legitimizing white supremacists and their racist violence by implying how they’re equivalent to anti-racist protesters.

Well, after the Pittsburgh massacre, when this Nazi terrorist killed 11 Jewish Americans, the Israeli Ambassador Ron Dermer reiterated Trump’s statement and essentially repeated it, claiming that the responsibility is on both sides, drawing a false equivalence between anti-racists on the left, specifically singling out the British leftist Jeremy Corbyn, the leader of the Labour Party, and implying that there’s a false equivalence between them and the kinds of Nazi terrorists who attacked the Tree of Life Synagogue. Well, ironically, Trudeau as you mentioned, who portrays himself as this liberal progressive figure- would you say that Trudeau, by trying to conflate Holocaust revisionism and denial with criticism of Israel and with BDS and the Pittsburgh massacre, do you not think that he is also, like Ron Dermer the Israeli ambassador and like Donald Trump, isn’t he also using this kind of both sides rhetoric to try equate Palestinian human rights activists and basically claim that they’re equivalent somehow to Nazis?

ALI ABUNIMAH: It’s utterly despicable. I mean, the Palestinian Solidarity Movement and Palestinians have always been loud in their opposition to right-wing racism, to anti-Semitism. The BDS movement has been very clear in official statements and in statements by many activists and intellectuals and scholars and writers that this is an anti-racist movement, that it stands in solidarity with the Jewish people against anti-Semites. But whereas Palestinians and their supporters often find ourselves standing with our Jewish comrades against racism, we see time and again, Israel and its supporters lining up with the racists and inciting against the left-wing Jewish activists. And we saw that as well, that the right-wing Israeli media was attacking left-wing Jewish activists and claiming that they brought this attack on themselves by supporting, bringing refugees and immigrants into the United States.

In other words, using pretty much the same anti-Semitic rhetoric as the killer, the synagogue killer, who had been blaming Jewish groups for supporting refugee resettlement in the United States. Again, the big picture here is that Israel, as a right-wing, ultra-nationalist, settler colonial project, its interests lie in demonizing people who support equal rights. And that’s why Israel finds allies today amongst the worst of the worst. Hungary’s pro-Nazi Hitler apologist, Prime Minister Viktor Orban, Poland’s right-wing ultra-nationalist government that has pushed through this law to basically enforce Holocaust revisionism, with right-wing neo-fascists all over Eastern Europe and the United States, and white supremacists in the U.S. It’s no wonder that Nazis like Richard Spencer in the United States strongly identify with Israel. And Spencer even calls himself a white Zionist, because they see Israel as an ultra-nationalist purification project, as the model for what they want to do in the United States.

And now, the service Israel is providing to racist anti-Semites and white supremacists across the Western World is that it’s kind of a laundry service, where if they are pro-Israel, if they say they support Israel, Israel will defend them against charges of anti-Semitism. And that’s exactly the role we saw Ron Dermer, the Israeli ambassador, playing with Trump. When the Jewish community in the United States was rightly pointing at Trump’s incitement and encouragement of white nationalism and anti-Semitism, the Israeli ambassador was touring the TV studios to say it’s wrong to criticize and attack Trump. That’s the role Israel plays. Israel today is one of the biggest defenders of anti-Semitism in the world.

BEN NORTON: Well, we’re going to have to end our conversation there. I was joined by Ali Abunimah, who is the founder co-founder and editor of The Electronic Intifada, which is an award-winning news website dedicated to original and investigative journalism on Israel-Palestine. Thanks so much for joining us, Ali.

BEN NORTON: Of course, anytime, I’d love to have you back sometime soon. For The Real News Network, I’m Ben Norton.