Canadian analyst Yves Engler discusses the history of Canadian humanitarian aid, which all too often works to support US foreign policy interests and have nothing to do with genuine concern for people's suffering

Canadian analyst Yves Engler discusses the history of Canadian humanitarian aid, which all too often works to support US foreign policy interests and have nothing to do with genuine concern for people's suffering 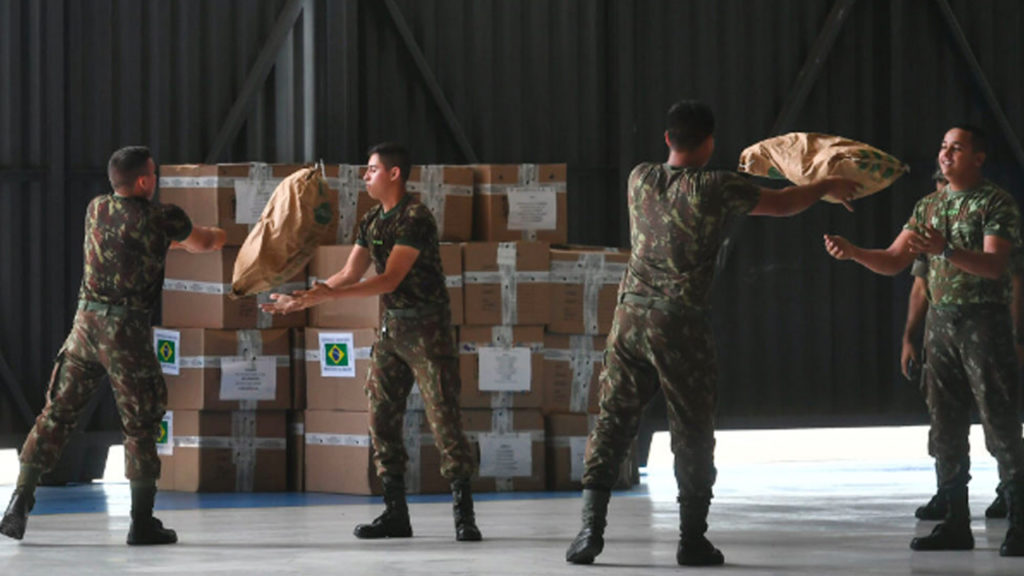 Venezuelan opposition leader and self-proclaimed interim president Juan Guaido says that the humanitarian aid that will be sent to Venezuela from Colombia will enter, no matter what. The government of Venezuela, under President Nicolas Maduro, however, has said that this aid will not pass its borders because it does not meet international criteria for aid, and it is designed as a political provocation. Now, international aid groups such as the International Red Cross and the UN have also refused to participate in the aid convoy being planned by the U.S., Canada, Colombia, and Brazil thus far because it is saying that this aid being offered has been extremely politicized.

One of the main countries behind this aid is, of course, Canada, which has promised $53 million worth of aid, more than double the U.S. commitment here. And we have to question why. Why it is committing all this money, $53 million, as aid, which is unusual for Canada in terms of the level of aid being provided to any one country.

Now joining me to discuss all of this is Yves Engler. Yves is a Canadian commentator and author of several books, and the most recent among them is Left, RIght: Marching to the Beat of Imperial Canada. Thank you so much for joining us, Yves.

SHARMINI PERIES: All right, Yves, let’s get into this issue of the aid, particularly coming from Canada, as humanitarian aid. You say in the article you just recently wrote that this aid is being used to stoke a military conflict. What did you mean by that, and and how is Canada, first of all, producing $53 million in aid, which is an unusual amount for Canada? And why do you say what you just said?

YVES ENGLER: Yeah. Well, in the article I give a bit of background on Canadian aid. You know, people have a very positive perception, because it sounds good. It’s aid. It’s supposed to be helping the poor, or whatnot. And if you look more generally at Canadian aid you find that there’s a long association of military intervention and Canadian aid. And that goes back to the Korean War of the early 1950s. Where U.S. and Canadian troops are killing people, Canadian aid usually gets delivered. South Vietnam during the U.S. war there. Grenada after the U.S. invasion. More recent years Haiti, Afghanistan, Iraq, top recipients of Canadian aid in the mid-2000s. That’s because they were Canadian–U.S. and Canadian troops in those countries.

So what I’m proposing in this article is that this is something a little bit unique about the situation in Venezuela today, where the aid actually looks like it’s–well, first of all, it’s designed to try to overthrow the government. But the aid is actually been using in an effort to maybe even stoke a war, to provide some sort of pretext for a U.S. or maybe Colombian military intervention into Venezuela. And obviously Juan Guaido, the self-declared interim president of Venezuela, is making all these declarations that he will force this aid into the country, that the Maduro government says that they won’t accept. This aid is being delivered mostly by U.S. military planes. U.S. military planes have delivered most of this aid to Colombia and to Brazil. And so this would be, I think, a somewhat unique scenario. I mean, I know in U.S. foreign policy history there are examples of aid very clearly being used to bring in weapons, and to stoke military conflict; notably in Nicaragua in the 1980s. One of the players behind that, Elliott Abrams, is also the appointee on Venezuela for the Trump administration.

But this isn’t–from the standpoint of Canadian foreign policy, and with Canada being so far at the front of this aid endeavor, and announcing, like you mentioned, $53 million, more than 2 1/2 times what the U.S. announced. And we don’t know that much about the details of where, of exactly what that aid is or where it’s going to. All we really know is it’s being, according to Chrystia Freeland, the foreign minister, almost all of it is going to the border countries; to Colombia and to Brazil. So again, that also, you know, fits with this this developing scenario we see if aid being stockpiled on the border, most notably in Colombia, but also in Brazil. And then some sort of effort this weekend to force that aid into the country, and possibly lead to some sort of–some sort of conflict of some sort.

SHARMINI PERIES: All right, Yves. Now, in an interview on The Real News with Foreign Minister Arreaza, he indicated that Venezuela is currently receiving aid. It is receiving aid from UN agencies; also from Russia. And it is accepting that aid and rejecting this kind of politicized, militarized, potentially conflictual conflict-driven aid that it is getting from Canada, U.S., and Colombia. Now, give us a sense of why Canada is providing this kind of aid at the border and trying to push the conflict at the border. Why is it doing that?

YVES ENGLER: [00:07:32] Yeah, I mean, I think that even if this aid effort doesn’t lead to some sort of military conflict, from the standpoint of Washington and Ottawa it’s part of a PR battle. It’s part of trying to make the Maduro government look bad. It’s to hype up the level of economic problems within Venezuela; to exaggerate the level of, the number of people not getting enough food. So from that standpoint it serves that purpose. And one of the things that’s going on alongside this aid effort on February 23 is the night before, Richard Branson, the multibillionaire British capitalist, is organizing a Live Aid-style concert in Cucuta, on the border with Colombia. And that’s designed, he says he’s trying to raise $100 million to help the humanitarian crisis within Venezuela. That’s clearly designed as part of this sort of international PR battle to demonize the Venezuelan government.

And so from Canada’s perspective, that’s obviously what they’ve been trying to do for a number of years now. And so this aid announcement from a couple weeks ago of $53 million contributes to that. I also think there’s a public relations purpose within Canada. And even people–some people who are sort of critical of Canada joining this Trump administration-led effort to try to oust Maduro’s government, that they’re actually supportive of aid. And so notably the Canadian Union of Public Employees, the biggest union in the country that has actually quite courageously criticized Canada’s policy for regime change in Venezuela, they’ve been under pressure by the corporate media over that position. And in an internal communique to try to, you know, justify their policy, they said that they are supportive of Canada’s aid objective in Venezuela. So a lot of people who are critical of Canadian policy get sort of seduced by the idea of aid, and don’t see it as just–you know, the aid and coup policy are sort of one and the same. Which is, of course, what I believe.

So from the government perspective, making a big announcement has a PR utility internally. And also I think it’s just–it’s about, again, it’s about rallying the international support. Canada has been at the forefront of rallying international support through the Lima Group of countries around the world to oppose Maduro’s government through the Prime Minister calling different leaders around the world, and making a major aid announcement like this $53 million Canada announced. It also puts pressure on other governments. And there was a [inaudible] about a week ago. I think Canada’s big contribution puts pressure on other governments to contribute a certain amount. And again, this is all tied into–you know, this aid is being shipped by U.S. military planes to the border. I think that in and of itself it sort of tells us, you know, what’s going on here. This is a very politicized endeavor. And that’s why the aid agencies are not going along with this and are explicitly rejecting participation in bringing this aid into Venezuela.

SHARMINI PERIES: All right. Yves, we’ll leave it there for now, and looking forward to having you back, as it looks like you’re going to be writing a lot more about what is going on. And we’ll keep an eye on what’s happening on the weekend on the border. And we’ll be looking for you next week. Thank you so much for joining us now.