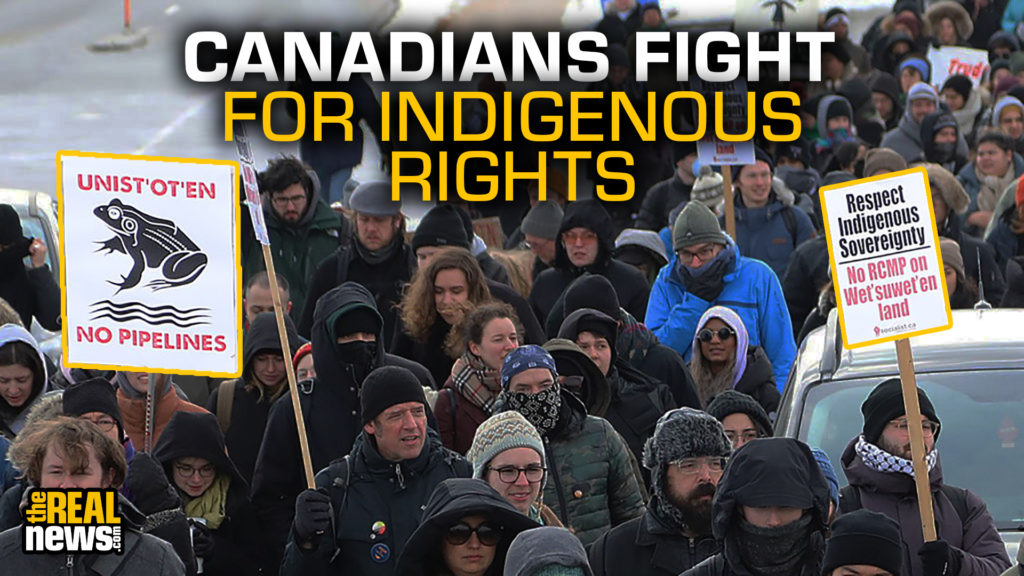 This past weekend, Canadian Prime Minister Justin Trudeau cut short an international charm offensive in order to return to Canada to deal with a worsening crisis. Trudeau was on a multi-state trip designed to garner support for a Canadian seat on the United Nations Security Council, but solidarity protests with Indigenous Land Defenders forced him to abandon that trip. The Wet’suwet’en people, whose land in northern British Columbia has never been ceded, had been peacefully resisting the construction on their territory of the Coastal GasLink Pipeline.

The planned pipeline would be 670 kilometers or 416 miles long and would run from a $40 billion fracking project near Dawson Creek to a liquified natural gas facility near Kitimat on the west coast of Canada. There the natural gas would be liquified and prepared for export to foreign markets. The RCMP or Royal Canadian Mounted Police, have responded to the peaceful resistance to this pipeline with heavy handed tactics. As revealed by The Guardian in December of last year, RCMP officers were prepared to shoot Indigenous Land Defenders.

According to documents reviewed by The Guardian, RCMP commanders instructed officers to “use as much violence toward the gate as you want.” On 7 January of this year, RCMP officers dressed in military green fatigues and armed with assault rifles descended on the land defenders’ checkpoint, dismantled their gate and arrested 14 people. Then earlier this month, in a further operation to dismantle the blockade erected by Indigenous level defenders, the RCMP blocked media from bearing witness to their operations.

Jerome Turner of Ricochet Media was detained by the RCMP for eight hours, prompting the Canadian Association of Journalists to denounce the RCMP for acting in blatant disregard of the law in a way that is previously unheard of in Canada and unthinkable in a democratic country. Since early February, solidarity protests have erupted around the country. Indigenous Land Defenders have blockaded rail lines in Quebec, BC and Ontario. Demonstrators have temporarily shut down ports. On February 16th, a solidarity protest temporarily blockaded the Rainbow Bridge between Canada and United States in Niagara Falls.

Now here to discuss this burgeoning crisis with us is Pam Palmater. Pam is a Mi’kmaq lawyer and a member of the Eel River Bar First Nation. She currently holds the chair in Indigenous governance at Ryerson University. She’s also a frequent media commentator, author and former spokesperson and educator for the Idle No More Movement in Canada, defending in Indigenous lands, waters and sovereignty. Thank you so much for coming back on The Real News, Pam.

PAM PALMATER: Thanks for having me and covering this issue.

DIMITRI LASCARIS: Pam, as you know as well as anyone, there is a long and illustrious history in this country of peaceful Indigenous resistance to the abuses of Indigenous rights. And this includes of course, the Idle No More Movement in which you played so key a role. But these protests seem unprecedented in one respect. They are causing economic disruption across the country. Do you think we’re witnessing a watershed moment in Indigenous resistance? And if so, why do you think this is happening now?

PAM PALMATER: I do think this is a watershed moment for lots of the reasons that you’ve outlined, but also because Canadians are standing with us in droves. During the Idle No More Movement was kind of the building of these relations and educating Canadians. This time around, Canadians are much more informed. They know to look beyond the headlines. They do their own research and they ask Indigenous peoples what’s going on.

And you’ll notice in many of these protest marches, rallies, blockades, you can see hundreds and hundreds of Canadians organizing this. Not all of them are even Indigenous led. That shows a real shift in Canadian education but also the will of Canadians to tell government, “Enough is enough.” And these are very targeted, very specific actions that Canada has to pay attention to. And I think how Canada responds right now, whether they respond with force or the promised nation to nation relationship, will determine what happens from this point forward.

DIMITRI LASCARIS: And I wanted to come back to the end game at the close of our discussion. But before we get there, I want to dig deeper into an issue. You talked about Canadians understanding the issues better today than in the past. Proponents of the Coastal GasLink Pipeline argue that band councils have consented to the planned route of the pipeline, whereas opponents of the pipeline assert that what matters here for purposes of Indigenous rights, is the consent of the hereditary chiefs, which has not been given. Could you talk to us about the band councils and please explain why their consent is not enough to justify the government’s actions?

PAM PALMATER: Yeah, so this isn’t about one group being better than the other group. This is just a matter of law in Canada. Under the Indian Act, chiefs and counselors, which is an imposed system on our traditional nations, have very, very limited jurisdiction and powers. It’s limited to the reserve lands. They certainly don’t have jurisdiction outside of those reserve lands. The pipeline doesn’t propose to cross any reserve lines. Whether or not the elected council did or did not consent to the pipeline is beside the issue for several reasons. One, it doesn’t cross reserve lands, they don’t have any jurisdiction over it.

Now government, and of course industry is going to try to confuse Canadians and say, “Oh, but we have this agreement.” They haven’t shown anyone this agreement. And that’s part of the problem. We don’t know even if the Indian Act councils did consent or not. What we do know from one of the leaked agreements is that the Coastal GasLink Pipeline has told first nations that they have to take every action to quell any dissent in their communities, not even allow people free speech, to speak in public or on social media. And that is also against our laws here in Canada.

DIMITRI LASCARIS: Now, today, Pam, I don’t know if you’re aware of this, but Murray Mullen, the CEO of the Mullen Group was quoted extensively in the Canadian Press talking about the rail blockades. The Mullen Group does trucking for the oil patch in both Canada and the United States. Mullen described the rail blockades as quote, ecoterrorism. How do you respond to that charge?

PAM PALMATER: Well, again, that’s just more inflammatory language, trying to turn Canadians against us because there’s literally a groundswell of support from Canadians and I would also add Americans who blocked some rails in Seattle. But this is about racist language. We’ve always been portrayed as dangerous, militant savages, domestic terrorists, and depending on which government is in power, you get more or less of that kind of dialog. All that does is scare people and it’s not based on facts.

Just like the Idle No More Movement, all of these activities which are done in solidarity, have all been peaceful and everyone organizing these have given as their first instruction, that this is to honor the Wet’suwet’en, to stand in solidarity with their land rights and no violence, no weapons, nothing is allowed at the site and that’s the way it’s been. And you know how it is in the media if people can use inflammatory or scary language that maybe people won’t want to support what’s happening. But so far Canadians have looked beyond those really inflammatory words.

DIMITRI LASCARIS: And finally, Pam, so far, the Trudeau government has resisted calls from people like Mr. Mullen and from right wing politicians, most notably the Conservative Party leader, Andrew Scheer, Ontario Premier Doug Ford and Alberta Premier Jason Kenney, to be more forceful in responding to the blockades. And in fact–and I personally found this rather surprising–the Indigenous Services Minister Mark Miller, after meeting with the participants in one of the blockade stated quote, “What I hear back from communities and Indigenous peoples when we talk about the rule of law is that the rule of law for them has been time and time invoked to perpetuate what believe to be historical injustices.”

PAM PALMATER: Well, that’s a really good question. And we all know Canada is the state perpetrator of genocide and they still haven’t addressed that. For all the nice words that they have used, they haven’t followed that up with actions. The RCMP still invaded and forcibly removed Wet’suwet’en peoples from their homes in fact. What we see though is a categoric difference on a province by province basis. I wouldn’t even say it’s a national response. You see the province of Ontario saying, “Wait, we’re not going to rush in and forcibly remove people. That didn’t work in any of the other protests. It just escalated tensions. We’re not going to do it here.”

And it’s important to remember in a democratic country, federal and provincial governments aren’t supposed to have any sway over law enforcement. Whether or not that’s the case, that’s another issue. But they can’t be telling them go in and get these people or remove these people or not. Thank goodness for its law enforcement restraint. I think Mark Miller so far has had the most relationship focused comments, to actually acknowledge that we’re only here because of a continued denial of our sovereignty, our governing systems, and our land rights; that’s the only reason why we keep having these flashpoints.

And I think on a go forward basis, Justin Trudeau is really going to have to sit back, do business, not as usual, not look to the usual political, “well, we’ll study this or we’ll have a meeting,” and actually sit down and have a nation to nation conversation with the Wet’suwet’en and try to work things out. And if that means no pipeline in Wet’suwet’en territory, they’re going to have to once and for all accept that we have the legal right to say no when we want to. And everybody’s watching nationwide whether or not that right is going to be respected. We’ll see how he moves forward.

DIMITRI LASCARIS: Well, we’ve been speaking to Indigenous lawyer, activist and scholar Pam Palmater about a burgeoning crisis in Canada relating to the Wet’suwet’en territory in British Columbia. Thank you so much for joining us again on The Real News, Pam.

PAM PALMATER: Thanks for covering this.

DIMITRI LASCARIS: And this is Dimitri Lascaris reporting from Montreal, Canada.

Pam Palmater is a Mi’kmaw lawyer and member of Eel River Bar First Nation, currently holding the Chair in Indigenous Governance at Ryerson University. She is also a frequent media commentator, author, and former spokesperson and educator for the Idle No More movement in Canada defending Indigenous lands, waters and sovereignty. Media: www.pampalmater.com is her…