North and South Korea have made important new steps in their ongoing peace process. But U.S. "discontent" over military de-escalation, along with Trump's planned withdrawal from the INF treaty, show that Washington neocons are still pushing back. We speak to Tim Shorrock of the Nation

North and South Korea have made important new steps in their ongoing peace process. But U.S. "discontent" over military de-escalation, along with Trump's planned withdrawal from the INF treaty, show that Washington neocons are still pushing back. We speak to Tim Shorrock of the Nation 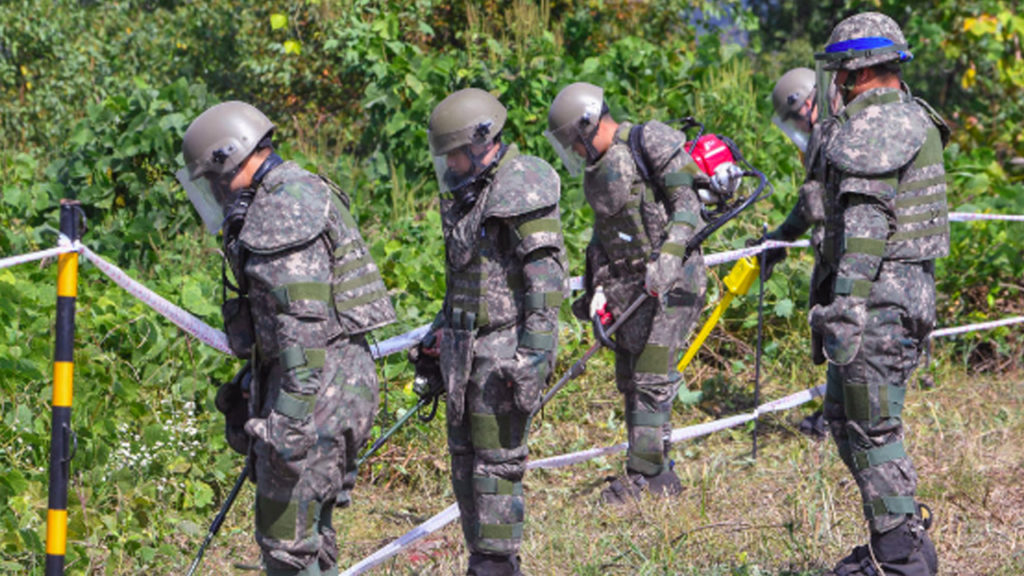 North And South Korea have made new steps to defuse military tensions. At talks on Friday, the two sides agreed to destroy 22 guard posts along their border. It’s part of a deal reached last month that called for an end to all hostile acts. But there is one party that may stand in the way. The Trump administration has reportedly expressed its discontent to South Korea about the military deescalation, and is said to oppose its call for a no-fly zone over the border.

So what is Washington’s real stance, and what does it mean for the Korean peace process? Well, joining me is Tim Shorrock, correspondent for the Nation, whose blog Dispatch Korea is available at TimShorrock.com. Welcome, Tim.

First of all, help me clear something up here. So the have these reports that Washington is expressing its discontent behind the scenes, but yet these military deescalation agreements that have been reached have been made in conjunction with the UN command in Korea, which the U.S. is a part of. So what do you make of the signals that are coming out of Washington right now?

So what’s been happening in the last couple months is that, yeah. There’s been this back and forth between the Trump administration and the Moon Jae in administration about South Korea moving too fast on its inter-Korea peacemaking, and diffusing the tensions between North and South Korea. And you know, as recently as about a month and a half ago, the UN Command actually blocked a plan by South Korea to move a train through the border area into the North to to help work with North Korea to inspect an important rail line that they hope to connect, you know, as part of their peace process. And after that, there was a lot of discussion between South Korea and the U.S., and then theU.S. backed down on that. And the train actually has made its way to the North, and that project has continued.

And if you recall, you know, a week about- it was last week, I guess, that Secretary of Defense Mattis said that the next set of U.S.-South Korean military exercises will be postponed. And so that was a real sign that, you know, at least from the Pentagon point of view, that the situation in South Korea has moved to the point where it warrants, you know, these kinds of actions by North and South Korea. So I think there’s been some real movement on the part of of the U.S. toward at least accepting some of the greatest ever made by North and South Korea on defusing the military situation in September.

AARON MATE: So then why the continued mixed signals? We have these reports that you have Secretary of State Mike Pompeo calling his South Korean counterparts and expressing his discontent over some of the agreements that they’ve made with North Korea. Do you think that this administration is still figuring out what it wants to do, and what its actual stance is? And if so, what are the forces that are in Washington that are pushing it against any kind of reconciliation between North and South Korea?

TIM SHORROCK: Well, the forces are, you know, the elements within the Trump administration; you know, i.e. John Bolton, and the kind of hard-line people that are at the National Security Council advising Trump on Korea. And then the vast majority of the think tanks here, which I call military-industrial think tanks that are pushing very hard for the maximum pressure policy that the Trump administration began last year, which was sanctions and military threats to curb North Korea’s nuclear program, and continue those pressures until North Korea gives up its missiles and nuclear weapons entirely. South Korea’s approach has been let’s work on the peace. Let’s defuse the situation and do some peacemaking measures, trust-building measures, and then move forward from that. And so, you know, that’s shown that they’ve made some great progress on that.

So this agreement this week to demolish the guard posts was part of an agreement that was made in September, as I mentioned; the military agreement with North and South to kind of remove the possibility of hostilities, an accidental clash at the border. And so you know, last week they also removed a set of mines that were there in one part of the demilitarized zone. And then on Monday the UN Command- which, again, is controlled by the U.S.- met with North and South Korea and worked out the agreements to set up the logistics for what happened this week.

And the role of the UN Command here is very, very important. Because you know, in the past, of course, the UN Command’s job is to enforce the armistice and to enforce the safety and security at the border between North and South. And so monitoring the border, monitoring the northern limit line that extends out into the sea on the country’s west coast. And so that’s been their primary focus. But in the last few weeks, as South Korea and North Korea have started making plans, cross-border plans, they set up this Kaesong- kind of basically a virtual embassy where the two governments have an office now north of the border. You know, they started moving goods there and supplying- South Korea began supplying electricity to that liaison office. The UN Command has allowed those movements to take place.

And that the fact that they were participating in this meeting on Monday shows that their role is starting to change. And I think that’s a very, very positive sign. Because you know, after all, the UN Command was created by the UN; they gave the U.S. complete control, created this command to stop the North Korean invasion and push North Korea north of the border. And then they continued on and invaded North Korea, and brought China into the war. So there’s there’s a whole history of the UN command, here.

So this change, where they’re actually participating in peacebuilding, is quite significant. And I think that it shows that people in the U.S. military- you know, the U.S. Forces Korea, and the Secretary of Defense on, are seeing signs of hope in terms of the peace process between the two Koreas.

AARON MATE: So as this process is ongoing, with the ultimate aim of the denuclearization of the peninsula, you have the U.S. this week, Trump withdrawing from- announcing the U.S. will withdraw from the INF, this bedrock of global arms control. Now, a lot of tension there on what that means for U.S.-Russia relations, whether this sparks a new nuclear arms race. But also the move is widely seen as a move against China. And of course it’s the, it’s the work, it’s widely credited to John Bolton, who you mentioned before, and his hawkish agenda to dismantle global arms control. So I’m wondering here, Tim, if you see implications of this decision on the North Korea-South Korea peace process.

TIM SHORROCK: Well, yeah, very much so. You know, I’ve written about this, that North Korea’s all the agreements, the pacts they’ve made, the sort of Trump and Kim, and Moon and Kim, the statements they’ve put out at their summits that aim at the denuclearization of the Korean peninsula, they don’t say the denuclearization of North Korea. And that’s because North Korea sees denuclearisation as a broader process that also includes the South and the U.S. forces arrayed against them in South Korea, as well as in Japan and the Asia Pacific region.

And so, you know, they would like- I wrote about this a few months ago when I was in Seoul, when I was talking to people there who had been talking directly to the North Koreans. You know, that they would like at some point when there is a denuclearization agreement, they want to be able to inspect U.S. bases in South Korea if the U.S. gets to send inspectors into North Korea. Because they want to make sure that there are no nuclear weapons in South Korea, as well. They also fear and have concerns about the massive U.S., this nuclear umbrella, so-called, that protects South Korea for us. When we talk about nuclear umbrella, we’re talking about hundreds of nuclear weapons aimed at North Korea. And so if Trump is going to give up this treaty and start building these kind of intermediate nuclear weapons again, medium-range nuclear weapons again, then this has serious implications for North Korea, because they will see that as actually a buildup of nuclear weapons, where this agreement is supposed to be going the other way.

So I think there’s some real dangers here. Although North Korea hasn’t really said much publicly about it yet. But I think it could complicate things if they keep pushing, as they actually do abrogate this treaty.

AARON MATE: We’ll leave it there. Tim Shorrock, correspondent for the Nation magazine. His blog Korea Dispatche is available at TimShorrock.com. Tim, thank you, as always.

TIM SHORROCK: Thank you very much.

Tim Shorrock is a Washington-based journalist who spent part of his youth in South Korea and has been writing about North and South Korea since the late 1970s. He just returned from a two month stay in Gwangju, South Korea, where during the Korean president campaign he interviewed South Korea’s President Moon Jae-In. He writes…

Trump’s Iran Treaty Withdrawal and Sanctions Based on Lies, but War Could Be a Reality