Can Gaza Survive the Occupation and Repression? (1/2)

In a new book, “Moment of Truth,” Sari Bashi discusses the 11-year blockade that has driven Gazans to the brink. With water unfit to drink, denial of education, healthcare and mobility, Gazans don’t have much to lose, she says.

In a new book, “Moment of Truth,” Sari Bashi discusses the 11-year blockade that has driven Gazans to the brink. With water unfit to drink, denial of education, healthcare and mobility, Gazans don’t have much to lose, she says. 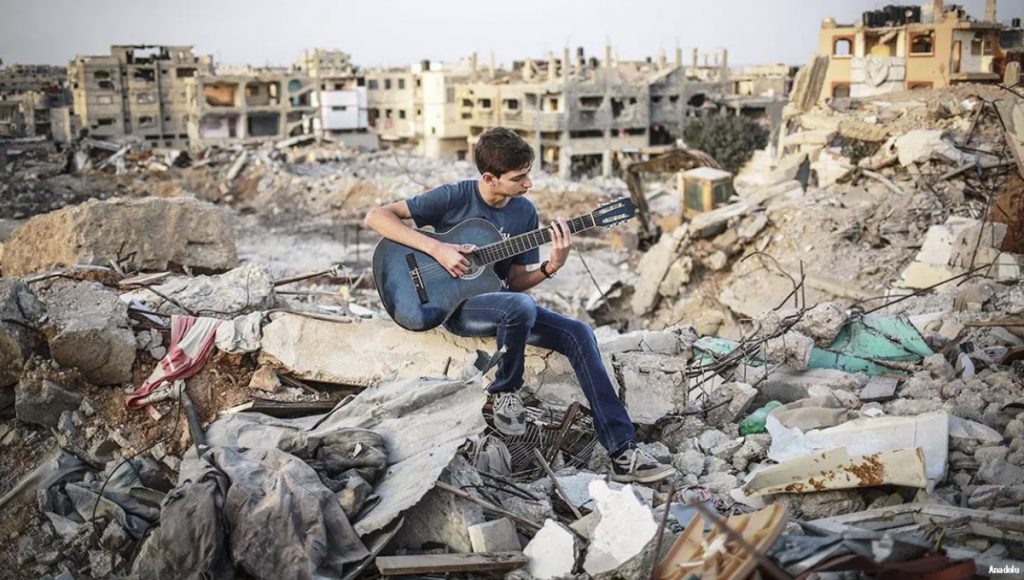 The Gaza Strip is home to nearly two million Palestinians, most of them refugees, and the children and grandchildren of refugees, who were deported in 1948 from what became the state of Israel. As the Great March of Return continues, with tens of thousands of Palestinians protesting the Israeli occupation and demanding the right of return to their homes, the Israeli military responds with lethal force in an attempt to break up the demonstrations, killing over 50 protesters so far, and injuring thousands.

It may help at this time for us to understand why the Palestinians are struggling, and want to continue their protests in the face of Israeli state violence, and to understand how Israeli policies of occupation have shaped the Gaza Strip both socially and economically in the last 51 years, and especially in the last 11 years, under a tight military blockade.

To discuss all of this I’m being joined by Sari Bashi. She’s written a chapter in a very important book, titled “Moment of Truth: Tackling Israel-Palestine’s Toughest Questions.” It’s edited by Jamie Stern-Weiner. And I should say Sari Bashi is also co-founder and former executive director of the Israeli human rights organization Gisha, which is a legal center for freedom of movement. I thank you so much for joining us, Sari.

SHARMINI PERIES: Sari, there are numerous reports about majority of the water supply in Gaza being fit to drink. Now, Gaza itself is becoming almost uninhabitable place, and you say by 2020 it will be. So Gaza is also the most aid-dependent area in the world. So I guess all of this combined with what is going on, which is many, many, many young people, thousands of them, protesting, demanding the return to their land in Palestine, and to of course to be able to leave the Gaza Strip. So I guess the question you’re trying to address in your chapter is can Gaza survive. Can it?

SARI BASHI: In terms of Gaza, I’m glad you mentioned the Israeli closure, which has strengthened in the last decade, because I think it provides context for why people in Gaza may feel like they don’t have very much to lose. For the past many decades, but especially since June of 2007 when the Hamas faction took over the Gaza Strip, Israel has kept Gaza’s borders mostly closed. And for perspective, Gaza has always been part of the rest of Palestine. So with a brief exception between ’49 and ’67, Gaza, the West Bank, and Israel were a single territorial, cultural, economic, and political unit, with family ties, commerce, cultural ties across the area.

So cutting off Gaza would be akin to cutting off the city of New York. It wouldn’t, as strong and as powerful as New York is, it wouldn’t survive very well cut off from the rest of the United States. So Gaza is not surviving very well cut off from the rest of the world and cut off from the rest of Palestine. Israel doesn’t allow the operation of an airport or a seaport. The crossing between Israel and Gaza allows less than 1 percent of the level of travel that we had seen in September 2000. And the crossing between Israel, I’m sorry, between Egypt and Gaza is mostly closed. Last year it was open for about 30 days nonconsecutively, and allowing just 5 percent of the number that it had allowed until it was recently closed.

So it means that people can’t travel. Young people who may have opportunities abroad to study, to visit, to work, for vacation, can’t get out. They can’t receive visitors. So institutions can’t have Palestinians from other parts of Palestine. Certainly foreigners, people to visit them when they’re sick. And then there’s, are also restrictions on the movement of goods coming in and out of Gaza. So outgoing goods, especially, are severely restricted. Exports, outgoing goods are about 10 percent of what they used to be. Meaning that industry in Gaza has no reason to produce, because they can’t make it to external markets. So poverty is quite high. More than two thirds of people in Gaza are dependent on humanitarian assistance. And last year the overall unemployment rate was 43 percent.

That all creates a situation in which people don’t have a horizon. And for many the demonstrations are a way to certainly protest, but they also don’t see what it is that they’re risking when they come there.

SARI BASHI: Sure. So when Israel first occupied Gaza in 1967, it actually reintegrated Gaza into the rest of Palestine. And for the first two decades of the occupation there was mostly freedom of movement. So Palestinians were encouraged to come into Israel for jobs as laborers, because the wages were so much higher in Israel that led to an influx of cash, which raised the standard of living in both Gaza and the West Bank. But there wasn’t very much investment. Industries in Gaza that were seen to be competing with Israeli industries were squelched. And the industries that were allowed to flourish were the industries that were kind of dependent on Israeli business or serving Israeli markets.

So the permit regime became better enforced. It became harder to get a permit. Physical barriers were built. In 1995 Israel built a fence around Gaza. So over the years, Gaza became increasingly closed off. And I think that culminated in 2007, when the Hamas regime took over. Israel declared Gaza a so-called hostile territory and announced that it would only allow access to what it called a minimum humanitarian level. The policy has gone up and down over the past many years, but basically Israel sees itself as being permitted to seal off Gaza, with the exception of a very narrow humanitarian passage.

SHARMINI PERIES: All right. Sari Bashi, I thank you so much for joining us on this Segment 1. We’re going to continue our conversation about the humanitarian conditions in Gaza in our second segment. Please do join us.