Mustafa Santiago Ali talks to Dharna Noor about how global warming, drought, and winds created the conditions for California's wildfires and what can be done to prevent this from happening in the future

Mustafa Santiago Ali talks to Dharna Noor about how global warming, drought, and winds created the conditions for California's wildfires and what can be done to prevent this from happening in the future 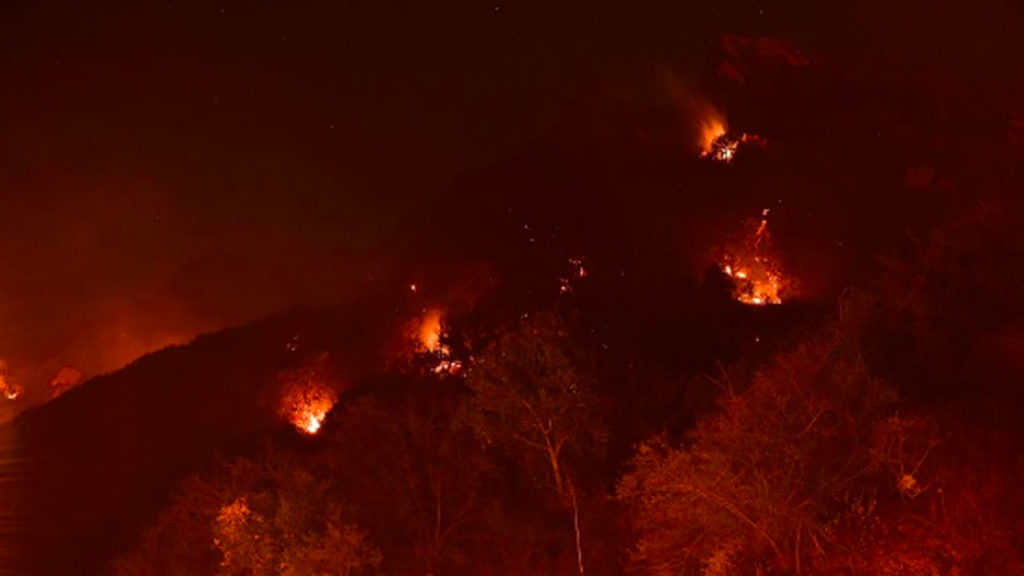 Two wildfires are still raging through California. At least 44 are dead and some 200 more remain missing. The so-called Camp Fire in Butte County above Sacramento is the deadliest in the state’s history. It’s now killed 42 people and that number is expected to rise. And the Woolsey Fire in Los Angeles County and Ventura County has killed at least two, and a quarter million people have had to evacuate. Scientists say strong easterly winds and state-wide droughts have fueled the deadly fires. President Trump called them devastating, but on Saturday he tweeted “There is no reason for these massive, deadly and costly forest fires in California except that forest management is so poor,” which outraged many. Days later, on Monday, he approved a major disaster declaration for the state.

Now joining us to talk about all of this from California is Mustafa Santiago Ali. Mustafa is the Senior Vice President of the Climate, Environmental Justice and Community Revitalization for the Hip Hop Caucus, and previously, he worked at the U.S. EPA for 24 years, most recently as the Senior Adviser for Environmental Justice and Community Revitalization to Secretary Gina McCarthy. Thanks so much for coming on today.

MUSTAFA ALI: Thank you for having me.

DHARNA NOOR: So Mustafa, you’re in California right now. What are you seeing? I know that you’re now in San Diego, but you were in Los Angeles. What are folks seeing, what’s going on over there?

MUSTAFA ALI: Well, folks are really concerned because of the intensity of these wildfires, how they are spreading and moving so quickly, and some folks, in many instances, don’t have the means to escape. But luckily, the first responders have been great in helping to move into areas that save people’s lives, that do the best that they can to help to put out the fire. So you know, there’s a lot of concern throughout the entire state about these wildfires and the impacts that they’re going to have on people’s lives, on property and on the economy as well.

DHARNA NOOR: Yeah, it’s terrifying. And a number of things have fueled these fires in California. Again, easterly winds, historic drought, warming itself. Talk about the role of climate change in all of this and how all of these things have come together to influence such deadly horrific fires.

MUSTAFA ALI: Yeah. Well, climate change is real, and unfortunately, we still have way too many people in decision-making positions who are climate deniers. We know that the planet is continuing to warm up and we know that there is a connection that exists between the warming of the planet and the changes in precipitation, which in many areas throughout California, folks have been suffering by not getting the precipitation that they normally would. And then also, the connection that exists in the droughts in making them more severe, thereby actually putting a platform in place for more intense wildfires that we are now seeing. And unfortunately, we are seeing them time and time again and there is a strong connection that exists between climate change and the intensity and frequency of these wildfires.

DHARNA NOOR: And again, this week, Trump approved the Major Disaster Declaration, approved for California. What impact will this have, how much relief will this provide for the state?

MUSTAFA ALI: Well I also, in my time there the Environmental Protection Agency, worked a number of man-made and national disasters, so I understand how important it is for folks to have the resources that are necessary for them to be able to do their jobs to the best of their ability. The president immediately should have made sure that that was in place. And even before this particular disaster, let’s call it what it is, he should have been making sure that all of the respective bodies had the resources that they need to address these severe weather events that continue to happen time and time again.

But unfortunately, he has a problem in understanding and believing the science that exists, that these climatic types of impacts are going to continue to happen and the wildfires, of course, are building upon the droughts that are there. So those resources that are coming are going to be critical for first responders to be able to continue to do the job that they need to do, to make sure that the resources are going for the airplanes and others that are a part of helping to control these wildfires along with men and women who are on the ground, but also those resources and additional ones that are going to be necessary to make sure that the right infrastructure is in place to address these continuing impacts that are happening from the wildfires.

MUSTAFA ALI: Yeah, again, it shows the disconnect of someone who’s never spent any time around these types of events. It shows that he does not understand the difference between a forest fire and some of the fires that we are now experiencing, and how they’ve started, where they’ve been located, that forest management was already in place and being done to the best of people’s ability and with the budgets that they had. And again, he continues to politicize these types of events, failing to realize that we are talking about real people’s lives. We’re talking about the futures of folks. In many instances, we’re talking about people’s culture as well, being stripped away.

And he needs to have a better understanding of the impacts that are happening to everyday people and do a better job. I often say and share with folks that my grandmother used to have a great phrase, where she said that “when you know better, do better.” He has now seen a number of different natural disasters and man-made disasters and continues to misstep each and every time by politicizing these issues and not doing what’s best for American residents.

DHARNA NOOR: And within California, what can be done? I mean, California Governor Jerry Brown has been touted as a climate hero by many, called this “the new abnormal,” and is acknowledging the role that climate change plays in fueling these fires. But he’s on his way out this January, so what can the California government do to prevent these fires, either before Brown’s term is up or even after?

MUSTAFA ALI: Well, again, it’s going to be about building the infrastructure. One, making sure that the resources are there to support the folks who are doing the work, not only when these disasters are happening, but beforehand. Making sure that those who are focusing on forest management, again, have the resources that are necessary. And then, there also is some education that we have to continue to move forward on for those local residents who are in these areas where are more prone to be having these wildfires. We’ve got to make sure that the education is there for them and for those who take advantage of moving into our natural spaces as well.

DHARNA NOOR: And who is being most affected, who is being hurt worst by these fires; not only the fires themselves, but also the fallout, the pollution that’s being created by all the smoke left in the air, some of the other health impacts that the fires have created? Who’s being hit worst in California?

MUSTAFA ALI: Well, it is a number of folks who are going to be impacted. Of course, those who are losing families, who are losing lives, we have to send up prayers and blessings to them, but that can never be enough. Sometimes we’re focused too much on that and not making real change happen. We also know that California has its own set of issues in relationship to air pollution. So when we have these wildfires that happen, it exacerbates the impacts, the public health impacts that happen in many communities, especially our most vulnerable communities, in communities of color and low income communities who are already dealing with the disproportionate impacts that are happening from air pollution.

We also have to be mindful of those who make a living here in the state of California, and that being taken away because of these impacts that are happening as well. So it is very broad-based in the sense of those who are being impacted from these types of situations that continue to happen.

DHARNA NOOR: Well, stay safe out there, Mustafa, our hearts are also going out to those lost and struggling because of these fires. Thanks so much for coming on today, we’ll be sure to talk to you again soon.

MUSTAFA ALI: Thank you for everything you guys continue to do.

Mustafa Santiago Ali is the Senior Vice President of Climate, Environmental Justice & Community Revitalization for the Hip Hop Caucus. The Hip Hop Caucus is a national, non-profit and non-partisan organization that connects the Hip Hop community to the civic process to build power and create positive change. Mustafa joined the Hip Hop Caucus after…