California passed a landmark net neutrality bill, which now awaits Gov. Brown's signature. ISPs are going all out for him to veto the law, but activists are keeping up the pressure

California passed a landmark net neutrality bill, which now awaits Gov. Brown's signature. ISPs are going all out for him to veto the law, but activists are keeping up the pressure 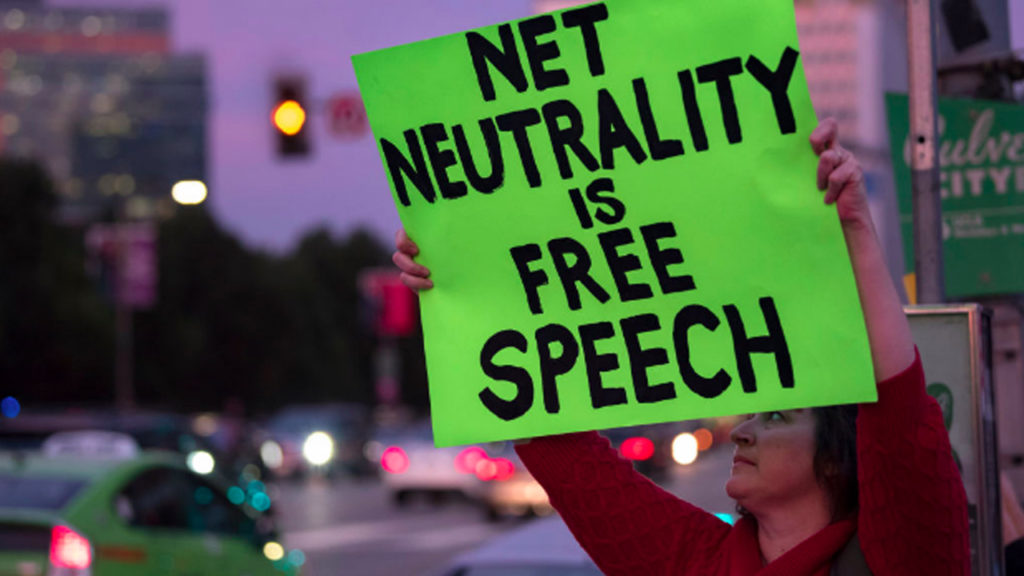 Last week the state legislature of California passed a major new law to restore the internet principle known as net neutrality. Net neutrality is the principle by which Internet service providers are supposed to treat all web traffic equally, where they are not allowed to favor some data traffic over other traffic. However, last July the Federal Communications Commission, or FCC, gave into internet service provider lobbying and repealed the federal net neutrality rules.

The California net neutrality law, known as SB 822, is now waiting for Governor Jerry Brown’s signature. Governor Brown has not yet said whether he will sign the bill. However, he’s facing enormous pressure from companies such as AT&T and Verizon to veto the bill. Here’s what the bill’s author, State Senator Scott Wiener, had to say about the bill’s passage last week.

SCOTT WIENER: The State Senate gave final sign off on Senate Bill 822, our net neutrality bill, which enacts the strongest net neutrality protections in the country. This is about activists who organize online and rely on people being able to connect on the internet. It’s about labor unions who are under so much pressure right now being able to use the internet to organize. It’s about media outlets who aren’t necessarily gigantic with deep pockets, who don’t have AT&T’s backing, Time Warner, who need to be able to access consumers.

GREG WILPERT: Joining me now to discuss the California net neutrality bill is Erin Shields. Erin is the National Field Organizer for Internet Rights at the Center for Media Justice. Thanks for joining us today, Erin.

ERIN SHIELDS: Thanks for having me.

GREG WILPERT: So, how did this bill come about? I understand that it was almost defeated when lobbyists managed to introduce amendments that gutted the bill. Tell us about this process and how it was saved.

ERIN SHIELDS: Right. So, the bill really stems from what happened last December after the FCC really abdicated all its responsibility to protect online users from being exploited by internet service providers. So, you saw a bunch of states introducing legislation. And SB 822, which was California’s version of the bill, was introduced shortly after the repeal of the 2015 Open Internet Order. And you’re right. So, what we saw was a really strong bill was introduced at the beginning, had all regular protections that the 2015 Open Internet Order provided. No blocking, no throttling, no paid prioritization.

And what you saw was internet service provider lobbyists really go in and swarm Sacramento and really, really try to wear down the protections that were so hard fought for and won at the federal level that were trying to be implemented at then the state level. But what you also saw was everyday internet users, policy advocates, activists and organizers really talk about the importance of net neutrality for a lot of the reasons that you’ve already heard. So, activists being able to engage their bases online, labor being able to engage online, people gaining extra income online. This is particularly important for Communities of Color who are finding online spaces as a way to get extra income to support their families.

So, through an overwhelming uproar and our ability to keep this in the news and to keep the country’s eye, quite frankly, on what was happening in California, we were able to restore a lot of the protections that were initially lost and really pushed through a bill that is being called the gold standard for the country. So, we’re really excited about that.

GREG WILPERT: Actually, that’s something I wanted to ask you about next, which is in what ways is it the gold standard or the strongest net neutrality bill, as Senator Scott Wiener said? What is it that makes it so strong and what effect did you expect to have on a national level?

ERIN SHIELDS: So, SB 822 does all the regular things that a net neutrality bill should. So, it prohibits blocking websites, speeding up or slowing down websites, or whole clouds of applications like videos, and charging websites for access to internet subscribers or for fast lanes. It’s like the regular net neutrality trappings, right? But also under this bill, ISPs are prohibited from abating protections at the point where data enters their networks, and also charging access fees to internet service customers.

And so, it’s that type of anti-competitive zero rating which leads to lower data caps for everyone. And so, that’s why we’re calling it the gold standard, because it really goes above and beyond in protecting people, particularly people who are living on low incomes who are often being taken advantage of, from really being able to access the full and wide scope of the internet and not just what the internet service provider wants them to see.

GREG WILPERT: And so, just to return to the other issues. Do you think that other states, or have you heard of other states wanting to emulate this bill?

ERIN SHIELDS: Yes, so we’ve seen- obviously we saw what had been happening in places like Oregon and Washington state, but we’re also seeing movement in New York. New York had a bill, and it will probably be picked up again in this coming legislative session. We’re also seeing movement in net neutrality in some other places like South Carolina and Georgia. And so, really we say this all the time, but net neutrality is really a bipartisan issue outside of Washington.

I think when you talk to people about what net neutrality means, it’s a no-brainer to folks. Without net neutrality, you’re depending on your Internet service providers, so Comcast, Verizon and AT&T, to be trustworthy. And if you ask the majority of people if they can trust their internet service provider, the answer’s going to be no. Creating protections is something that is widely popular.

GREG WILPERT: And so, what has been the reaction from the internet service provider companies such as AT&T and Verizon to this bill? I mean, we know that they tried to stop it earlier. Now, clearly they’re probably lobbying Governor Jerry Brown. But what do we know about what they’re actually doing to prevent it from becoming law with Governor Brown’s signature?

ERIN SHIELDS: So, from my understanding and from what I’ve seen, they have spent no time in heading up to Governor Brown’s office to talk about why this bill is harmful to their companies. And so, we’ve done the same. Actually, just today we submitted a letter along with nineteen other community-focused organizations talking about why Governor Brown should sign this legislation without delay and why it’s so important to Communities of Color and poor people, which is often an untold story when you’re talking about net neutrality.

And we’re not alone in that. I know that there are a ton of other public interest groups and even businesses, because this is also a business issue, it touches a wide scope, talking about why it should be signed into law without delay. And so, these internet service providers have considerable lobbying power and that is not something that should be discounted. Average, ordinary internet users and people who are just fans of democracy and people having fairness with accessing the Internet have been speaking out and really keeping this in the news. And so, we hope and urge that Governor Brown will sign it without delay.

GREG WILPERT: And then, finally, recently there was a very real example of the consequences of the net neutrality repeal when firefighters in California had their Internet access throttled. Tell us about what happened there and whether this new bill would prevent something like this from happening again.

ERIN SHIELDS: Yeah. California firefighters, who are obviously very busy, have their internet throttled at a critical time when they’re fighting wildfires in California. And typically, there is an agency that would look into it and would also provide regulation on the ways that, for the data to even be throttled, provide regulations around it. Since December, the FCC has really abdicated its responsibility to being regulator.

And we didn’t think it would be as egregious as it was. We thought it would be towards consumers and not towards public safety workers like firefighters. But it really just highlights the point that there is really no shame with the the internet service providers, and we really can’t trust them to not block, throttle or create fast lanes on the Internet. And so, what the California bill will do is provide authority for enforcement and to regulate on the on the on the front.

And so, to regulate so that type of stuff doesn’t happen and that if somehow it is able to happen, that there is some sort of enforcement mechanism where people can take grievances and actually have the wrongs righted. And so, I know that Californians are excited to be able to have this sort of regulation and protection for their rights online, and so were we. We’re really excited that things like we saw with the California firefighters, people will actually have recourse and hopefully things like this will not be able to happen again.

GREG WILPERT: Okay. Well, we’re going to have to leave it there for now. Of course, we hope that the bill actually gets signed. It’s also in the interest of The Real News, considering that we’re an internet-based media outlet. I was speaking to Erin Shields, National Field Organizer for Internet Rights at The Center for Media Justice in California. Thanks again, Erin, for having joined us today.

ERIN SHIELDS: Thank you so much for having me.

Erin Shields is the National Field Organizer for Internet Rights at the Center for Media Justice. Prior to working with CMJ, she was a community organizer with Bread for the City, fighting alongside DC residents living on low incomes for equitable redevelopment without displacement, and previously worked as a government affairs coordinator at the Internet…