Students rallied and marched in 207 municipalities of Brazil, to declare their opposition to right-wing President Jair Bolsonaro's education reform that would privatize much of Brazil's higher education. Mike Fox reports

Students rallied and marched in 207 municipalities of Brazil, to declare their opposition to right-wing President Jair Bolsonaro's education reform that would privatize much of Brazil's higher education. Mike Fox reports 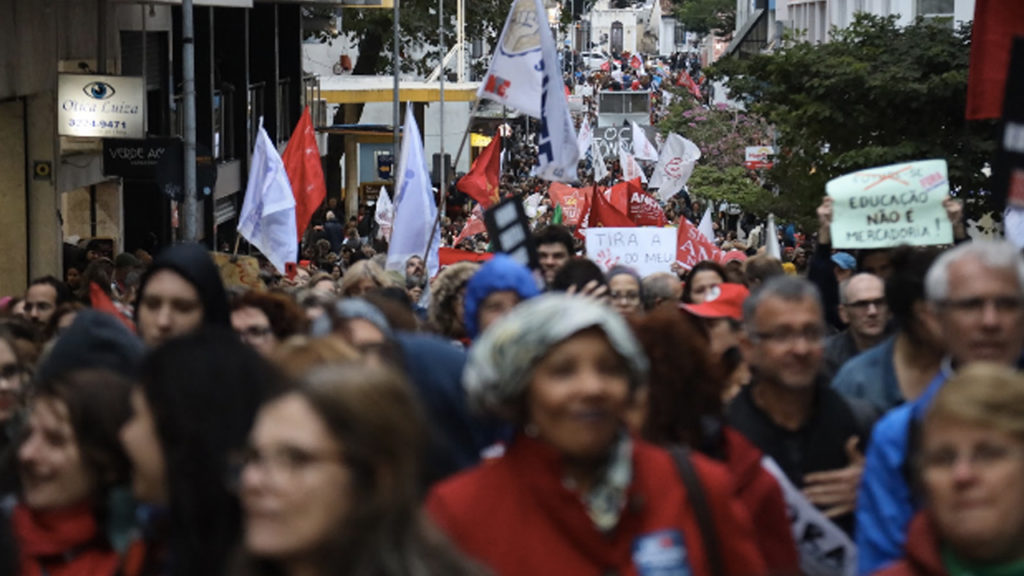 MIKE FOX Students and workers rallied across Brazil against the government of far-right president Jair Bolsonaro, his push for pension reform, cuts to education & what they say are his plans to privatize the federal university system.

Rallies were held in 207 municipalities, according to the National Confederation of Education Workers.

This was the 3rd student strike and mass demonstrations in three months. It was also the largest national action against the Bolsonaro government, since the June National Strike.

JULIA COELHO We are here fighting for education, in yet another day of national actions in defense of public education. We believe that Bolsonaro’s budget cuts and this new Future-se program looking to be implemented at universities is an attack on public education in Brazil, it converts education into a market good to be bought and sold and that’s not what we believe education should be.

MIKE FOX The program Future-se, or make yourself the future, was announced by Education Minister Abraham Weintraub last month as a means of financing federal universities by opening them up to private funding from businesses and other entities.

ABRAHAM WEINTRAUB We are presenting an alternative for freedom, for growth, wealth, and development, which will be built by all of us.

MIKE FOX The Ministry of Education says this plan is not a push to privatize public education. But university professors and deans have expressed major concerns, because they weren’t consulted, and because it puts the administration of universities in the hands of outside groups. They say it could impact how teachers are hired, the classes that are offered, and the direction of the university itself.

The issue was front and center at the demonstrations, where students fear it could be the beginning of the end of the federal university system as they know it.

ANDREY SANTIAGO Regarding the government’s Future-se program, look there is no such thing as a gentle slap on the face. If we allow them to push this through they are going to come with all they have. It’s the end of the public university and the beginning of the total privatization of the university system.

MIKE FOX The Future-se program comes in the wake of a 30% budget cut to federal education that was announced in May.

MATEUS RODRIGUES They say there’s a deficit and if they don’t make these cuts they won’t balance the budget, but it’s a lie. The government has given exemptions to big businesses that are overdue in their pension payments, and paid millions of dollars for votes in Congress.

MIKE FOX Bolsonaro used a substantial percentage of the money cut from the Ministry of Education earlier this year, to buy off congressional votes in order to approve his pension reform in the Lower House. Bolsonaro promised $3 Billion reais or $750 million dollars worth of congressional amendments in exchange for support for his key legislation.

Students say cuts are reminiscent of the process that has been used to privatize public services in the past.

MATEUS RODRIGUES This is how privatizations are often carried out: You weaken a public service to say that it doesn’t work and needs to be improved. Then you hand it over to private interests under the argument that it’s better or more efficient when we know that’s not true.

MIKE FOX The rallies were smaller than the massive turnouts seen in May, but still widespread and substantially larger than the pro-Bolsonaro demonstrations seen a few months ago.

International coverage, however, was distinctly absent. Al Jazeera and the AP were the only two outlets to publish small notes. They got the number of actions wrong, though, and failed to mention the key thing that students were in the streets against: Bolsonaro’s push toward privatizing education.

The rallies were called by the country’s largest student union, as well as the largest labor federation in Latin America, the CUT. The major issue on their agenda is stopping pension reform. It’s already been approved by Congress and it’s now working its through the Senate. The government says it wants to pass it in the next two months.

Bolsonaro says he’s going to keep pushing to make his reforms go through. He says he has an agenda that he wants to happen. We’re going to see what happens in the coming months.”