Hundreds of Brazilians rallied in defense of U.S. journalist Glenn Greenwald, on Tuesday. Greenwald has been threatened to be deported, imprisoned, and even killed, because of his role in the release of the on-going bombshell Intercept leaks, which revealed right-wing bias in the corruption investigations that saw former president Luiz Inacio Lula da Silva jailed

Hundreds of Brazilians rallied in defense of U.S. journalist Glenn Greenwald, on Tuesday. Greenwald has been threatened to be deported, imprisoned, and even killed, because of his role in the release of the on-going bombshell Intercept leaks, which revealed right-wing bias in the corruption investigations that saw former president Luiz Inacio Lula da Silva jailed 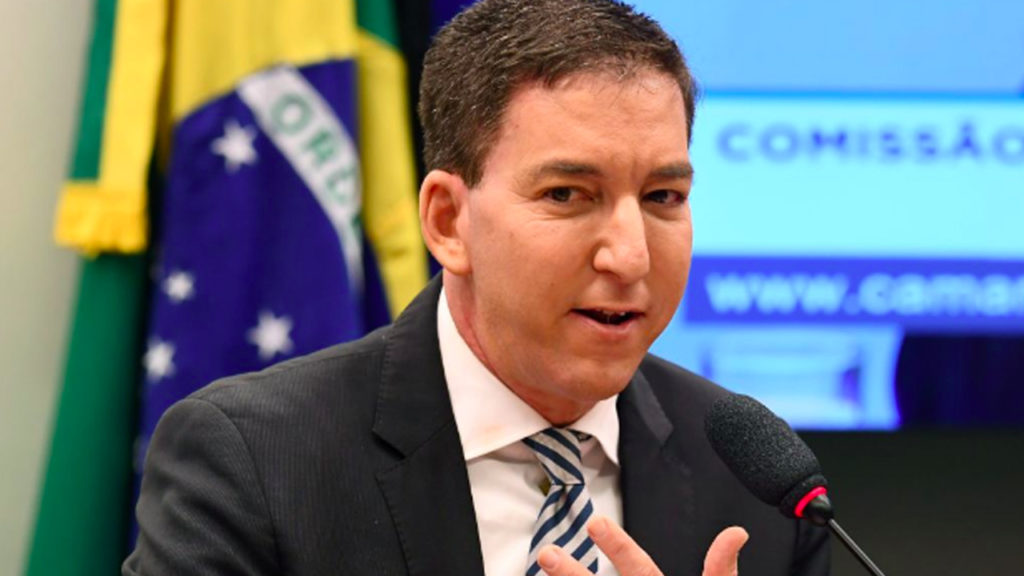 MIKE FOX: Hundreds of Brazilians rallied in defense of U.S. journalist Glenn Greenwald, on Tuesday. Greenwald has been under attack by the government of far-right president Jair Bolsonaro, for his role in the release of on-going bombshell leaks that implicate Justice Minister Sérgio Moro in a possible right-wing plot to smear and convict former President Luiz Inácio Lula da Silva, which blocked him from competing in last year’s elections.

Greenwald was been threatened to be deported, imprisoned and even killed.

Events were held in both Rio de Janeiro and Sao Paulo. They were organized by the Brazilian Press Association and attended by several well-known Brazilian artists. Videos in solidarity were sent by the head of Brazil’s lower house Rodrigo Maia, Canadian journalist Naomi Klein, and even Fox News host Tucker Carlson.

TUCKER CARLSON:  I’ve been reading with great concern about the threat from the Brazilian government to punish or imprison journalist Glenn Greenwald for his reporting on high-level officials.

GLENN GREENWALD: I am not going to let the country of my children turn into a dictatorship.

MIKE FOX: Greenwald is the co-founder of the investigative outlet The Intercept, which has been publishing the on-going leaks. These revelations, which stem from private Telegram messages between members of the country’s anti-corruption task force, clearly show then judge Sergio Moro illegally and consistently guided federal prosecutors in the corruption investigations, while also presiding over the proceedings as a supposedly impartial judge. Moro himself convicted Lula in 2017. After Bolsonaro’s election last year, in a highly suspect move, the president-elect appointed Moro as his justice minister.

Moro has denied the authenticity of The Intercept leaks and has accused the outlet of being a criminal organization. Last week, his Justice Ministry detained 4 hackers, which he says are the source of The Intercept’s leaks, although he has not provided any evidence. He also signed a decree, facilitating the deportation of foreigners under criminal investigation or labeled “dangerous”. It appeared to be aimed at Greenwald.

Last Saturday, Pres Bolsonaro threatened Greenwald with prison. He has repeated his statements in subsequent days.

RÊGO BARROS: So, your question is about the crime?

JOURNALIST: Yes, what was the crime committed?

RÊGO BARROS: About the crime that was committed…

JOURNALIST: By the journalist

RÊGO BARROS: The president has no doubt about the crime. I don’t think anyone has any doubt.

JOURNALIST: But I want to know… What crime did the journalist commit?

RÊGO BARROS: I repeat, is there any question that a crime occurred?

JOURNALIST: But can you tell me, because that’s my question.

JOURNALIST: But which crime?

JOURNALIST: I’m sorry, but it’s still not clear. What crime did the journalist commit?

MIKE FOX:  Rêgo Barros did finally read a statement from Bolsonaro, which said that so-called hackers were guilty of attacking the Bolsonaro government and responsible for the crime of invading cell phones. However, the statement did not mention Greenwald. And we still do not know the actual source of the Telegram messages, which The Intercept has been rigorous in protecting.

Bolsonaro’s threats to imprison Greenwald are only the latest in a concerted, right-wing campaign to discredit the leaks and silence The Intercept and its lead journalists. This campaign has involved intimidation, fake documents, distorted news, Twitter bots, and attacks on leading members of The Intercept and their families.

Greenwald has lived in Brazil for more than a decade. He is married to congressional representative David Miranda, and they have two adopted boys. But they have faced a series of disturbing death threats.

GLENN GREENWALD: They’re very graphic and directed at our children, at our family and at us personally. They’re the kind of threats that, obviously, a lot of thought goes into and a lot of resources are behind. And that’s why we take them very seriously and have been turning them over to the Federal Police. Unfortunately, that Federal Police is commanded by Sérgio Moro, who, as our reporting demonstrates, is willing to cross every line and break every law in order to achieve whatever ends he deems just. And so, our confidence in their ability or their willingness to investigate those threats is not very high.

MIKE FOX: Meanwhile, false stories have been produced, and pushed over social media and replicated by right-wing YouTubers and Breitbart-style Brazilian outlets such as O Antagonista. Documents were faked to appear as though Greenwald paid $300,000 to Russian hackers for the leaked messages, or that he had paid off allies to acquire his husband’s congressional seat. These were then promoted by government representatives as authentic or valid.

These fabricated so-called leftist scandals have helped to deflect attention from the real content of The Intercept revelations, and they have been wholeheartedly embraced by supporters of president Bolsonaro, who are excited for anything that is shocking, makes for a good conspiracy, and attacks the left, no matter what the content is.

They have also been perfectly in line with the Bolsonaro government strategy of Ignoring, denying, deflecting, and attacking those responsible with suspect information — and often homophobic rhetoric.

In early July, The Intercept Brasil Executive Editor Leandro Demori spoke to a packed crowd in Florianopolis, about the ongoing revelations and the campaign to discredit their work.

LEANDRO DEMORI: Sergio Moro said this exact phrase. He said we are a site allied with criminal hackers. In other words, he said that we are committing a crime. He called us criminals: Criminal Brazilian journalists. If we don’t speak out, If I don’t come talk with you here, or do interviews on television, our voice disappears, this narrative gains force and it becomes that much easier for us to be sidelined and effectively seen as allied with criminals in the narrative that they are trying to build.

MIKE FOX: The continued release of shocking revelations have helped The Intercept stay one step ahead of the government narrative, but fake and distorted news has been sidelining the content. It’s a tactic that Bolsonaro himself has rallied behind. According to the fact-checking agency Aos Fatos, like U.S. president Donald Trump, Bolsonaro has made false or distorted declarations at a rate of more than one a day, since his inauguration in January.

MERLIN MALACOSKI: “\This goes against the very essence of journalism. Many people don’t know what journalism is. If the story says something that contradicts what you believe is the right side, then they think it’s not journalism. If you’re in favor of it, it can be anything, and it’s true and all the rest is fake news…. It’s concerning that perhaps we are on a road from which there is no return, or maybe it will take us a long time to understand what is and what isn’t fake news.