Jair Bolsonaro, the extreme right, or neofascist candidate for Brazil's presidency nearly won with 46 percent of the vote, thanks to big business backing. He now faces Fernando Haddad for the October 28th run-off vote. Brian Mier analyzes the result and what comes next

Jair Bolsonaro, the extreme right, or neofascist candidate for Brazil's presidency nearly won with 46 percent of the vote, thanks to big business backing. He now faces Fernando Haddad for the October 28th run-off vote. Brian Mier analyzes the result and what comes next 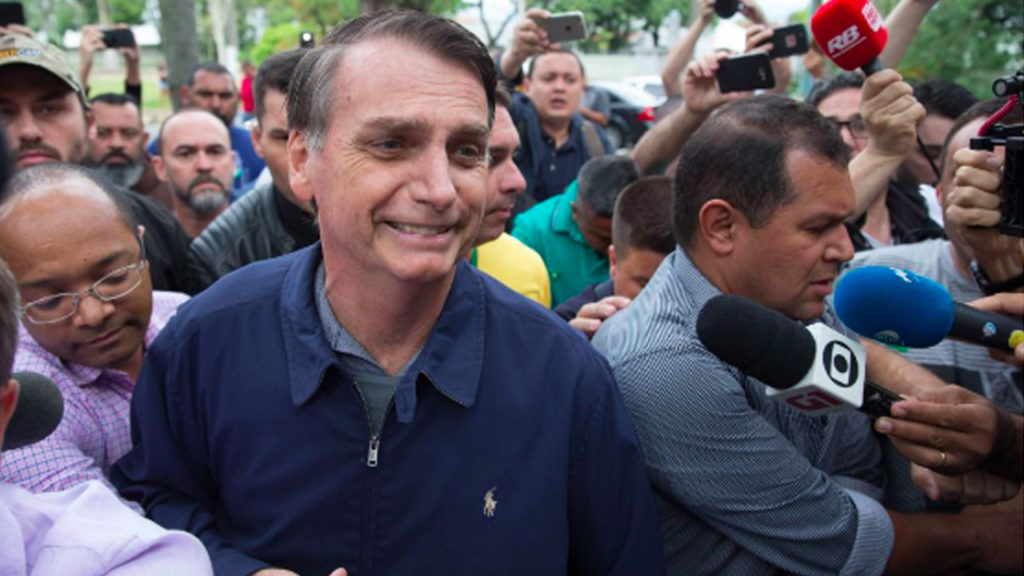 Brazilians almost elected Jair Bolsonaro, a far-right extremist- some would say a neofascist- as their president. On Sunday he barely missed the 50 percent mark, coming in at 46 percent of the vote. The other candidate, who will face Bolsonaro in a runoff on October 28, is Fernando Haddad. Haddad replaced former president Lula da Silva as the Worker’s Party candidate a few weeks ago, and came in with 29 percent of the vote on Sunday. It now remains to be seen how many of the other 11 candidates who are running for president will endorse Haddad in order to try and prevent a Bolsonaro presidency.

Joining me now to discuss Brazil’s election results is Brian Mier. Brian is the editor for the website Brazilwire, and is also editor of the book Voices of the Brazilian Left. He joins us from Sao Paulo, Brazil. Thanks for being here again, Brian.

BRIAN MIER: Thanks, Greg. How are you?

GREG WILPERT: Pretty good. So it seems that this result was even worse than most people feared. The last opinion polls before the election had indicated that Bolsonaro had about 35 percent support. But he came in well above this. What happened? How do you explain this result?

BRIAN MIER: Well, Bolsonaro hasn’t been campaigning on television. He hasn’t been participating in the debates. His entire strategy is based on social media. And he has support in this by Steve Bannon. And so what we see is a very similar situation to Brexit and Trump’s victory, where the polls were wrong because there was a last minute bombardment of fake information and slander over the social medial in this case What’sApp, which is a Facebook product which is very popular in Brazil. Brazil is the largest user of WhatsApp in the world. Over half the Brazilian population uses it.

And so you have these WhatsApp groups, thousands and thousands of groups, called The Myth About Bolsonaro, each one going to 256 people. So there’s a very- it’s very difficult to audit, you know, to find out who’s behind the slander. But they spread- they targeted the evangelical community, which is about 30 percent of the Brazilian population, with a bombardment of lies about things like if the, if Haddad is elected the government’s going to start forcing children to become homosexuals. They spread a fake Photoshop photo of Manuela Davila, the vice presidential candidate, with a t-shirt that said ‘Jesus is a transvestite’ on it. And they just bombarded people with these messages.

And so it caused the surge. But they failed in their main objective, which was to win in the first round, at least. And so now there’s three weeks to regroup. And if Bolsonaro keeps avoiding debates- he’s a very poor debater- it’s going to damage his image and credibility with voters. And hopefully this coupled with the other candidates support for Haddad will be enough to push Haddad over the top, and avoid Brazil basically transformed into a fascist- neofascist- country, as it was during the military dictatorship from 1964-1985; a dictatorship that Bolsonaro was part of, but his vice president, who was a general, General Mourao, was a main actor in.

GREG WILPERT: So who is backing Bolsonaro, and why? I mean, he seems like he came out of nowhere. But actually, I mean, he’s been a member of Congress for a long time. But he seems to have gathered a lot of support very recently. Where is that support coming from?

BRIAN MIER: Well, yeah, it’s true he’s been a congressman for 28 years. During this 28 years he only passed two laws. So he’s been ineffectual as a congressman. The New York Times ran a fluff piece praising him in 1993. There’s a corporate think tank supported by all the major players in the oil industry, and Monsanto, and other big American companies called ASCOA, America Society Council of the Americas, which was founded by the Rockefellers in the 1960s, and has supported every- almost every coup in Latin America since. They flew up Bolsonaro a few months ago for a secret meeting with American business leaders. And then their editor Brian Winter published an article in Folha de Sao Paulo, the biggest newspaper in Brazil, a few weeks ago saying why Wall Street is rooting for Bolsonaro.

Well, the reason Wall Street is apparently rooting for Bolsonaro is because his finance adviser Guedes, Paulo Guedes, was a member of the Pinochet economic team. He’s a University of Chicago-educated neoliberal economist who is promising to privatize everything, to keep handing Brazil’s natural resources over to foreign corporations, which is the tendency that basically started after the 2016 coup.

GREG WILPERT: So tell us some more about some of the other election results. Brazilians not only voted for President, but also for Congress, the governors, and state legislatures last Sunday. Was there a pronounced rightward shift in these other races as well? Or was it mostly limited to the presidency?

BRIAN MIER: The results are pretty interesting. The PT Party took some losses. They went down from 61 to 56 congressmen, but they’re still the largest bloc in Congress. And basically it was the Northeast of Brazil that kept the right from winning in the first round. Most of the governors in the Northeast are from left parties. A lot of left victories in the Northeastern states,which is the traditional poorest part of Brazil, traditionally more progressive.

But at the same time, the traditional parties, the parties that orchestrated the 2016 coup and planned on benefiting from it, like the PSDB party, which has made the final round in every presidential election since 1994, they got pummeled. Their candidate, who was Wall Street’s first choice in this election, ended up with only about 5 percent of the vote. And you know, they were the main alternative to the PT for 25 years in Brazil, and they took losses all over the place. The PMDB party of Michel Temer took major losses, as well.

So in one sense, it’s blowback. People are angry at them for throwing out Dilma Rousseff. At the same time, the party that gained the most is this tiny far-right wing party with fascist tendencies that’s homophobic, that believes in arming, letting the police kill whoever they want, et cetera. You know, the PSL, they gained a lot of seats.

GREG WILPERT: So I just want to turn now to the voting process itself. There have been some who complained that there might have been some fraud, or even accused the process of being fraudulent at some level. I wonder, now, first of all, what do you think of that? And secondly, also, how was turnout, compared to previous elections?

BRIAN MIER: OK. Well, regarding fraud, this is mainly Bolsonaro say- well, Bolsonaro has been saying that if he doesn’t win, he doesn’t recognize the results, because he’s accusing the process of being fraudulent in advance. OK? So He’s complaining now of fraud because he didn’t win in the first round, and he’s announced that he’s not going to accept the results at the end of this month if he doesn’t win.

But there’s been plenty of institutional fraud. For example, the fact that Luis Inacio Lula da Silva was the frontrunner, predicted to win in the first round, was not allowed to run for office is fraud in itself, because the electoral courts allowed 1400 other candidates with identical legal situations to Lula’s. In other words, they’re waiting for the appeals process to play out and some kind of charges against them, they were allowed to run. And some candidates with much more serious legal problems than Lula were allowed to run, like Gubernatorial Candidate Anthony Garotinho in Rio has been in jail twice, you know. So that’s fraud. And then they removed three million voters from the from the registry the week before the elections, because they said their biometric information was wrong. And most of these voters were in the poor Northeast, which is the same region that prevented a Bolsonaro victory. So apparently that’s three million voters, most of whom would have voted for Haddad.

And then- I mean, I could go on and on if you want to talk about irregularities in this election. But those are a few prime examples.

GREG WILPERT: I think that’s very important, because it hardly gets out at all. So what will happen now? Will the other candidates endorse Haddad in order to prevent a Bolsonaro presidency, kind of like what happened in France when the choice was between the neoliberal Macron and the far-right Le Pen?

BRIAN MIER: Well, what happened was interesting- in a bad way, you know, bad interesting- is that most of the other candidates lost all of their support to Bolsonaro already, especially in the center and the center-right. For example, Marina Silva, who had something like 16 percent in the last presidential elections, she ended up with 1 percent of the vote, and all of her voters went to Bolsonaro. And Geraldo Alckmin from PSDB, who was predicted to be a possible winner, he ended up with 5 percent. He lost most his votes to Bolsonaro. But what we do have is Ciro Gomes, the third place candidate who ended up with 12 percent, he’s going to support Haddad.

So we can expect at least a base of 40-41 percent for Haddad. And then the other big factor in the election are the undecideds, are the people who cast blank ballots or didn’t vote, which was almost 30 percent in this election; roughly comparable to the last election. But in the case of this menace of fascism returning to Brazil, remembering that we’re in a country that has 53 percent Afro-Brazilian population, where the front runner is openly racist against black people, hopefully more people will leave the ranks of the undecided or the apathetic and side with Haddad, and that will be enough to push him through.

GREG WILPERT: Well, we’re going to leave it there for now, but we’d love to have you back on as we get closer to the October 28 runoff vote. I was speaking to Brian Mier, editor of the website Brasilwire. Thanks again, Brian, for having joined us today.