Fast Food Workers Gear Up for Nationwide Strike for $15 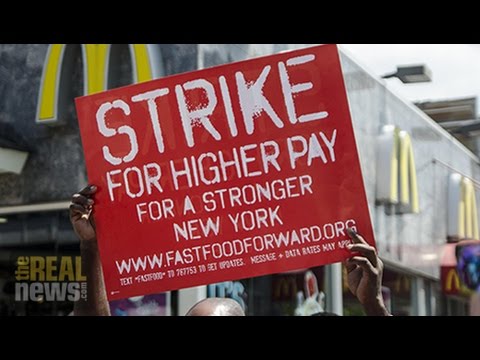 PAUL JAY, SENIOR EDITOR, TRNN: Welcome to The Real News Network. I’m Paul Jay, and welcome to another segment of the Pollin Report, with Bob Pollin. And Bob joins us now from Amherst, Massachusetts.

ROBERT POLLIN, CO-DIRECTOR, POLITICAL ECONOMY RESEARCH INSTITUTE: Hi, Paul. Thanks very much for having me on.

JAY: So just to remind everyone, Bob is co-founder and co-director of the PERI Institute there, and one of the things the PERI Institute has been working on a great deal is the issue of minimum wage. So what’s new on that front, Bob?

POLLIN: Well, there’s a big action that’s going to take place the middle of next week, April 15th, in which the movement, the Fight for 15, the fight for a $15 minimum wage nationally has organized protests all around the country. And they expect, and I expect, that these protests will be very widespread. We’re looking at hundreds of thousands of people participating in the protests.

These protests to date have been quite successful in moving the needle around minimum wages. We have, as you know, we have a $15 minimum wage in place in Seattle. We have $13, I think $13.25 in Chicago. They’re debating a $15 minimum wage in Los Angeles. Other cities are also taking action. So the movements have been very powerful. They have forced employers, some of the most notorious employers, to raise wages. McDonald’s announced last month that they were raising their own, voluntarily raising their own minimum wage in the stores, at the outlets that, at the outlets the corporation itself runs. McDonald’s, they’re raising it to $9, and next year $10. Target has done the same thing. Wal-Mart has done more or less the same thing.

They’re not doing these, these corporations are not taking these actions just to be nice. They’re taking them because they’re being forced to by the strength of this movement.

JAY: Is it also, are they afraid of unionization?

POLLIN: Well of course that’s part of it. I mean, the point is, they think they’re about to lose control of these labor issues, and so they want to quell it by making small gestures. But raising the minimum to $9 is hardly adequate. I mean, there’s 29 — the federal government minimum wage is, you know, is $7.25 still. There’s 29 states in the country, more than half, that have higher statewide minimum wages, and many of them have a $9 minimum wage already. California already has a $9 minimum wage. Oregon, Washington, Vermont already have minimum wages above $9. Massachusetts, my own state, is at $9.

So that’s where the actions by the companies are obviously minimal recognition of the need of workers to get higher wages.

JAY: And it’s really minimal, because as we’ve discussed on The Real News before, I think with you and some of your colleagues, in fact the majority of people that work at McDonald’s are not students, which is sort of the impression that’s given. There’s a large percentage that actually are the single income earner for families.

POLLIN: Right. I mean, the range of wages around the minimum wage, we’re looking at something like 85-90%, are people that are on their career trajectory. These are real job trajectories. It’s not part-time jobs just to finish up school. It’s people who are contributing 50% or more to their overall family income. So these are the livelihoods on which people depend. So when we talk about the rise of inequality in the country and doing something to support the 99% and raising living standards and reducing inequality, the most effective single tool that we have to work with at the moment is to raise the minimum wage, and to raise it to something decent. A $15 minimum wage is what I would call minimally decent.

JAY: And you and Jeannette Wicks-Lim did a study that showed, according to the study, that not only is this a minimum for people to live on but it’s also doable for the industry without such dire consequences.

And we also found, whether this is right or wrong, that they could do this even without cutting their own profits. That’s where we are, that there is a cushion there. Now yes, we’re going to see some modest price increases in the fast food industry, and we’re going to see gains in productivity through turnovers going down, absenteeism going down. They become better jobs, so people want to stay on the job. And that’s how you’re able to pay for the jump to a $15 minimum wage, even in the fast food industry.

JAY: And if there is a little lowering of profit, that’s not sacrilegious.

POLLIN: Of course not. I’m not saying that there shouldn’t be. But I’m saying that what our calculations show — and our calculations have been reviewed by people who are quite serious and prominent. For example, a leading economist at the Federal Reserve Bank of Chicago, Daniel Aaronson.

JAY: Right. And is there evidence that the protests have affected sales? Have people stopped, during at least times of protest, buying burgers?

POLLIN: Well, I don’t think, I don’t think that they have to any significant degree. We know, for example, that McDonald’s as the biggest fast food giant has experienced loss of sales. Their reputation has been damaged by the protests to the extent that they are now responding, as is Wal-Mart, by saying oh, well, yes. I mean, we know that what happened last year at Wal-Mart was that Wal-Mart started creating support systems for, like, holiday Christmas time, for people that were, that had low incomes. And those included a lot of their own employees. So Wal-Mart was creating ways to support their own employees through charity when they wouldn’t pay them through wages. So they got–

JAY: And we know a lot of Wal-Mart employees and I suppose other people in the fast food industry also rely on food stamps, which is another way they get support.

And you know, what really is a decent wage? Well, you know, a very good resource from the Economic Policy Institute tries to set decent wage standards for communities. I was just looking at the figure for my own, close-by community in Springfield. If you look at the figures for Springfield, what we’re looking at is a single parent with one child, the Economic Policy Institute calculates should be earning about $28 an hour in order to cover all the necessities in a reasonable way. It’s not an inflated family budget, it’s a reasonable family budget. That’s $28 an hour. So that’s how far we are, even with a $15 minimum wage, we’re not close.

JAY: And you’ve made this point before, but I think it should be made again. If you look, if you go back to what it is, 1971, 1972 minimum wage and correct it for inflation, what would it be?

JAY: And that difference is part of what’s going into the pockets of people that are betting on derivatives because they have nowhere else to invest. That’s why there’s such enormous inequality.

POLLIN: That has contributed to inequality and financial instability. Because if you keep workers’ wages down, when workers’ wages do not rise with productivity, well, that means that the income is there. And if it’s not going to workers, it’s going up to the top. So what you have is the enormous rise in inequality which has created enormous pools of funds that are available for financial speculation. So it has contributed to financial instability.

JAY: And people don’t have enough money to buy stuff, which essentially leads to stagnation in the economy.

JAY: All right, thanks for joining us, Bob.

POLLIN: Okay, thanks very much for having me, Paul.