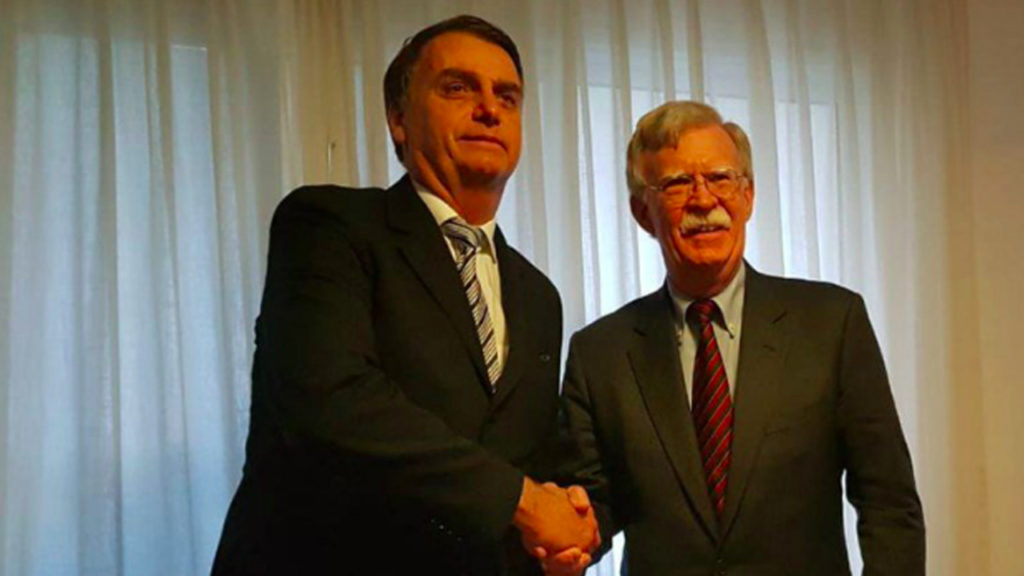 GREG WILPERT: U.S. National Security Advisor John Bolton visited Brazil’s far-right president-elect Jair Bolsonaro on Thursday. Shortly after Bolsonaro’s election last October, Bolton had already called the newly elected leader a “like-minded” partner whose election-win should be seen as a welcome development in the region.
JOHN BOLTON: The recent election of likeminded leaders in key countries, including Ivan Duque in Colombia, and last weekend Jair Bolsonaro, are positive signs for the future of the region. And demonstrate a growing regional commitment for free-market principles, and open, transparent and accountable governance.
GREG WILPERT: Bolsonaro is often called “the Trump of the Tropics,” but actually he bears more similarity to the more extreme president of the Philippines, Rodrigo Duterte. Bolsonaro has been blatantly sexist, racist, and homophobic and praised Brazil’s brutal military dictatorship of 1965 to 1984, actively threatened Brazilian leftists with exile, believes that climate change is a hoax, and has promised to open up the Amazon rainforest to extensive development.
During the one-hour meeting between Bolton and Bolsonaro, the two are said to have discussed how to undermine Cuba, how to strengthen ties with Israel, and how to increase trade between the US and Brazil. With regard to Israel, Bolsonaro has said that he plans to follow the US in moving Brazil’s embassy to Jerusalem, once he takes office on January 1st.
With regard to Cuba, Bolton has been clear that he is targeting not only Cuba, but also Venezuela and Nicaragua for what amounts to regime change. Earlier this month Bolton called the three countries the “troika of tyranny”.
JOHN BOLTON: This Troika of Tyranny, this triangle of terror stretching from Havana to Caracas to Managua, is the cause of immense human suffering, the impetus of enormous regional instability, and the genesis of a sordid cradle of communism in the Western Hemisphere.
GREG WILPERT: With regard to Venezuela, it is not known what the two are thinking of doing, but Bolsonaro has mentioned the possibility of closing the border between Brazil and Venezuela. If this were to happen, it would intensify the economy pressure that Venezuela is already suffering from, as a result from U.S. financial sanctions.