The Japanese Sumitomo corporation runs one of the world's largest zinc, copper, and lead mines in Bolivia, where it has been denying workers overtime pay, despite a court order to pay them. We talk to the mine workers' union president, Henry Cayo

The Japanese Sumitomo corporation runs one of the world's largest zinc, copper, and lead mines in Bolivia, where it has been denying workers overtime pay, despite a court order to pay them. We talk to the mine workers' union president, Henry Cayo 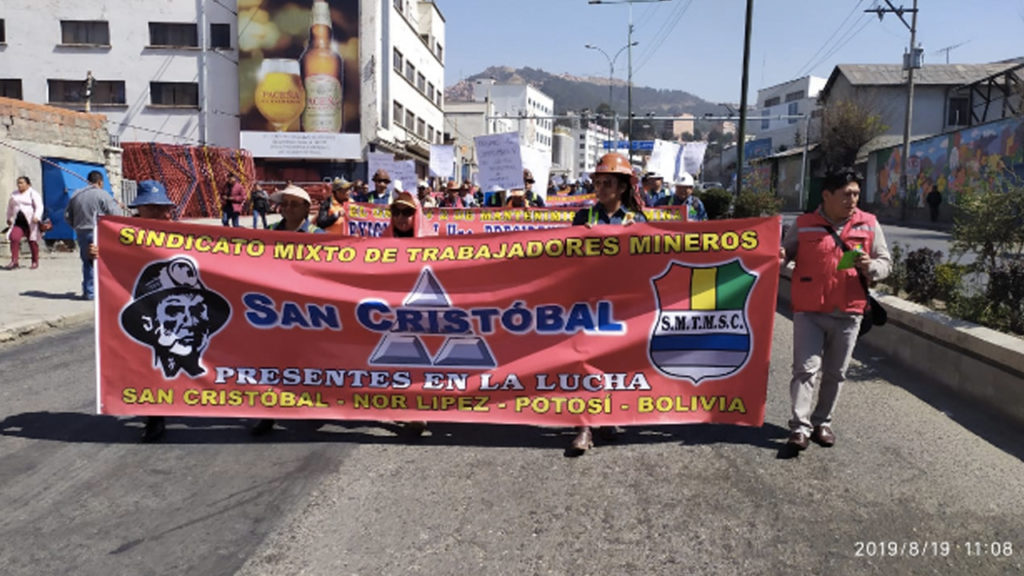 GREG WILPERT Welcome to the Real News Network. I’m Greg Wilpert in Baltimore. On Monday, August 19 Bolivian miners began a major strike against the San Cristobal silver, lead and zinc mine, which is one of the largest of its kind in the world. The company operating this mine is Sumitomo, and Japanese mining corporation, also one of the world’s largest.

HENRY CAYO Good afternoon. How do you do? I’m glad to be able to be part of your show.

GREG WILPERT So tell us first, what are the problems and issues that the workers are currently having with the San Cristobal mine? That is what does the union want and how many minors are actually involved in this action in the strike?

HENRY CAYO. The workers, the minors of San Cristobal, a Sumitomo subsidiary, are demanding from the company to comply with a judicial ruling issued by the Bolivian ministry of war. Our demand is that our Sunday’s pay to be counted as overtime. We the workers started a process of arbitration and conciliation with the ministry of work in 2018 and on February 8th, 2019 after a year, the arbitration tribunal agreed that there had been a mistake when paying workers their salaries. There are 834 mining workers affiliated in our union. So the ministry orders San Cristobal Mining, a Sumitomo subsidiary, to catch up and pay the due amount which had not been duly paid, whether by mistake or intentionally from February 7th, 2007 all the way to today. And from today on wages must be paid as mandated by law. Our union sends a number of memos to the company. We went as far as sending a note to the Sumitomo Corporation in Japan. We have not had any positive response. To this day, both San Cristobal and Sumitomo Corporation shareholders have not replied. They are ignoring our communications. It is in that context that the San Cristobal workers decided to go on an indefinite general strike.

GREG WILPERT So you already answered the question, actually my next question, which was going to be what the response has been from the mother company that is the parent company, the Sumitomo Corporation in Japan. You’re saying that they haven’t responded at all. But how do you see their responsibility for the situation at the moment in Bolivia with this particular mine or are they just peripherally involved in the sense that most of the blame for the problems involved the company in Bolivia?

HENRY CAYO We had some contact at the beginning of the year with the Sumitomo Corporation. They told us first we need a judicial resolution in favor of the workers, then we’ll pay. In the meantime, we won’t. That was their reply. Now since the resolution was issued saying that our Sunday overtime pay has not been duly paid Sumitomo Corporation went silent. This is a clear example of a bad business administration. We are not responsible for how things are being run.

GREG WILPERT Can you be a little bit more concrete in terms of what the Morales government and Bolivia is doing that is to oppose your union and to support the Sumitomo Corporation?

HENRY CAYO The government is backing up the Sumitomo corporation. The Japanese corporation is against the workers, all of their political and economic influence here in Bolivia.

GREG WILPERT We’re going to leave it there, but we’re going to continue to follow the situation with the strike in Bolivia. I was speaking to Henry Cayo, President of the San Cristobal mixed mine workers union. Thank you very much, Henry, for having joined us today.

HENRY CAYO It is my pleasure and I would like to send a cordial and fraternal as well as revolutionary greetings to all of your audience.

GREG WILPERT And thank you for joining the Real News Network.