The OAS and Bolivia's opposition are accusing the Morales government of fraud in the recent presidential election, but offer no evidence. They're following Sen. Marco Rubio's lead, says CEPR's Mark Weisbrot.

The OAS and Bolivia's opposition are accusing the Morales government of fraud in the recent presidential election, but offer no evidence. They're following Sen. Marco Rubio's lead, says CEPR's Mark Weisbrot. 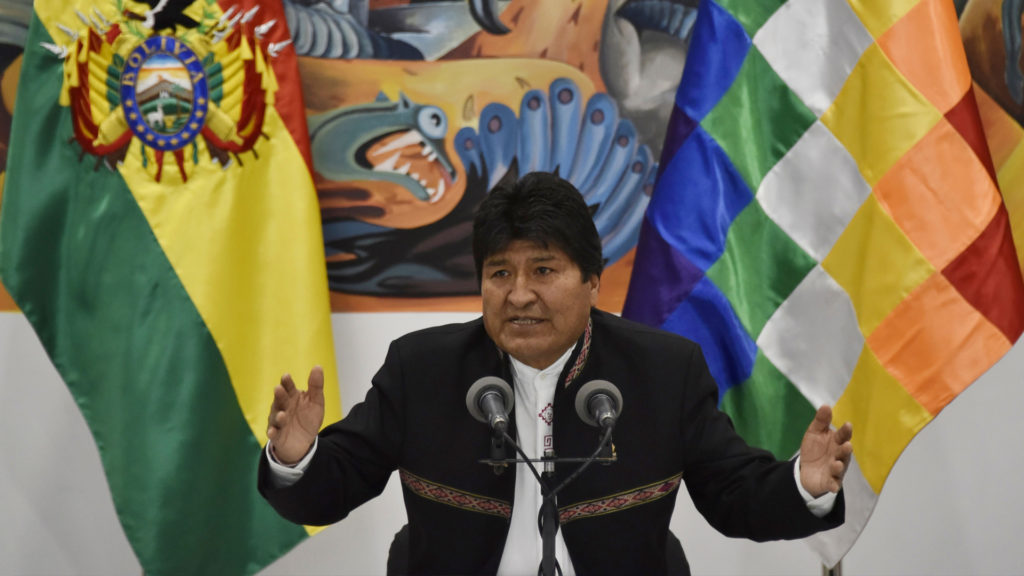 Bolivia held a presidential election last Sunday and according to the official vote count, incumbent President Evo Morales won re-election to the presidency by a razor-thin margin. Actually as of Thursday, the latest numbers show with 99% of the votes counted, that Morales got 46.95% of the vote and former President Carlos Mesa got 36.6% of the vote. That’s a 10.3% lead for Evo Morales.

However, according to Bolivia’s Constitution, a runoff vote is only avoided if one of the candidates gets at least 40% of the vote and has at least a 10 point lead relative to the candidate with the second most votes. Carlos Mesa and his supporters are now saying that Morales actually won under 10% of the vote and that there was fraud. He is now calling on his supporters to take to the streets and to protest against the result. Here’s what Mesa had to say on Wednesday.

CARLOS MESA: It is evident that there has been a wide process of fraud. It is also evident that any result that shows Evo Morales as the winner in the first round is a product of fraud. And we are going to present all of this in the next few hours.

GREG WILPERT: The Organization of American States, which had an electoral observer mission in Bolivia, supported Mesa’s claim, saying that there were “irregularities” and that even if the 10 point margin of difference were true, a second runoff load should be scheduled anyway.

MANUEL GONZALEZ: The definitive results show a 9.48 difference between the candidates, which means that there should be a second round. In the event that the counting has concluded and the margin of difference be more than 10%, it is reasonable to conclude that it would be in relation to the problems witnessed during the electoral process. A second round continues to be the best option.

GREG WILPERT: Both sides are now calling for their supporters to mobilize on the streets. And president Evo Morales has even said that the opposition’s actions amount to a coup attempt. Joining me now to discuss the Bolivian presidential election is Mark Weisbrot. He is co-director of the Center for Economic and Policy Research and author of the book Failed: What the Experts Got Wrong About the Global Economy. Thanks for joining us again, Mark.

MARK WEISBROT: Thanks Greg. Great to be here.

GREG WILPERT: So on Monday night, Manuel Gonzalez–who we actually just saw; the head of the OAS observant mission–said he was profoundly concerned by the “drastic reversal” in the vote results relative to Sunday night, which had showed an eight point difference between Morales and Mesa. Now it’s at more than a 10 point difference. You recently took a deep dive into the Bolivian election results. What did you find? What happened?

MARK WEISBROT: Yes. This was a very irresponsible thing of the OAS to do. And you can see in their later statements since then, and their preliminary report, they’re starting to walk back from this. They still don’t have any evidence that there was any fraud whatsoever. And it wasn’t that hard to explain for anybody who bothered to look at the data how it was that the results–the later results that came in–had a margin for Evo that was bigger than the earlier ones. And that’s simply because they came from areas where he had more support.

And this isn’t unprecedented. You see this in elections and election results from time to time; very often rural areas where he does actually have more support come in later than urban ones, or the richer areas will come in faster. So there’s really nothing there at all. We looked at the data and it’s all on the web. The election’s very transparent, and all of the data is up there from all of the polling places. And you can see it. You can see that the change in trend didn’t come from a change in the way people were voting. It just came from a change in the areas that were reporting later. Those areas reported about the same margin than they did before that break.

GREG WILPERT: Now, it’s interesting to note; I think that major media outlets such as the New York Times are running screaming headlines saying things such as: “There Could be a War; Protests over Elections; Royal Bolivia,” and “President accused of fraud in Bolivian election as he opens with big vote lead.” Now, what do you think of these kinds of headlines and these kinds of accusations? How serious do they look? And also if you could do it, make a comparison to other cases such as elections in Mexico, which you’ve also studied. How does this compare?

MARK WEISBROT: Oh, yes. Well, this is much more hostile. I mean, in 2006 you had an election in Mexico where Calderon won by 0.6 percentage points. And there was so much slop in that election. We looked at it very carefully. There was no way you could tell who won, and the media simply accepted it without question. We looked at it quite a bit. We didn’t find any hard evidence of fraud, so we didn’t allege fraud. But we could say that, for example, half of the mesas–the polling places–the numbers didn’t add up. And so,, you really couldn’t say who won.

And this is a problem. You know, in any election that’s close… They were particularly sloppy. But really, in any election that’s close… And even in the United States. Remember Bush versus Gore in 2000; you really can’t say who won. That’s always going to be a problem. And so, you have to go by the results. And if they’re really unclear, people can recommend a recount or doing it over. But there’s always going to be people who proclaim fraud. It’s happened in a lot of the elections we’ve looked at in Latin America. And the only one where we know that it really did happen was Honduras in the last election.

GREG WILPERT: Now, what is the OAS’s and the Secretary General Luis Almagro’s role in all of this? They started out, first of all, with these pronouncements. And Luis Almagro has been re-tweeting it. What do you think the effect of their position will have on Bolivia and on Morales’ claim for legitimacy?

MARK WEISBROT: The OAS, as I said, is playing a terrible role here. I can’t speak to everybody’s individual motivations–except for Almagro. You can see he’s a fanatic. He’s been tweeting about… or actually issued a press release blaming all the demonstrations you see in Ecuador and Chile all on outside forces; people he doesn’t like–Cuba, Venezuela, whoever. So he’s really not a credible source. And I’m afraid he’s part of the problem here since he’s running the OAS. But I think it comes from further up. You can see, for example, and we put this in our press release, a tweet from Rubio hours before the OAS issued their press release, where they implied that there was something wrong with the results without offering one shred of evidence. And Rubio was encouraging them to do that. And then there were other Trump administration officials. And they have a lot of influence over the OAS because they supply 60% at least of the money for the OAS. And so, they’ve manipulated the OAS before.

In fact, in 2011 in Haiti, the OAS had an observer mission that literally reversed. They did something no observers have ever done in my knowledge. They reversed the results of the first round of Haiti’s presidential election without even a recount or even a statistical analysis, nothing. They basically admitted later that it was political, but they got away with it. And they’ve done that. They did that once before in Haiti as well. They changed their original report which said the election was clean–it was in 2000–in order to go along with the regime change effort of the United States which lasted from 2000 to 2004. And it was very heavily based on that illegitimacy that was alleged by the OAS which had no foundation whatsoever. And that’s what I’m really worried about, because this is really a set up. It’s really as ugly as it looks. And you really do have the OAS… As I said, they’re backing off quite a bit now. They won’t say what they said in that statement again, but they’ve done the damage and they’ve led the media. And so that’s, I think, part of the responsibility; at least for some of those headlines you saw.

GREG WILPERT: Yeah. I think it’s also impressive that they said that even if the result is more than 10% there should be a second round. I mean… that they would go out on a limb like that.

MARK WEISBROT: Yeah. That’s a little outrageous for an electoral observation mission to say. But again, to be fair, from a practical standpoint, it is true that when elections are really close you almost never know who actually won. So this is close. I mean, it’s not that close. I think he got at least… it’s looking like 10.4 or something. So that should be enough to certify the results. And again, there’s no allegation and no indication of fraud, and so there’s really no reason for anybody to be saying that.

GREG WILPERT: Okay. Well we’re going to leave it there for now. I was speaking to Mark Weisbrot, co-director of the Center for Economic and Policy Research. Thanks again, Mark, for having joined us today.