Sen. Bob Graham: Bush and Cheney Created an Intel Culture of “Not Wanting to Know” about 9/11 Attacks (Pt.2/2)

Senator Bob Graham, former Co-Chair of the Joint Congressional Committee investigating 9/11, says President Bush was like a "head coach" ordering intelligence agencies to all move in the same direction - not preventing the attacks and covering up the role of Bandar and the Saudi government

Senator Bob Graham, former Co-Chair of the Joint Congressional Committee investigating 9/11, says President Bush was like a "head coach" ordering intelligence agencies to all move in the same direction - not preventing the attacks and covering up the role of Bandar and the Saudi government 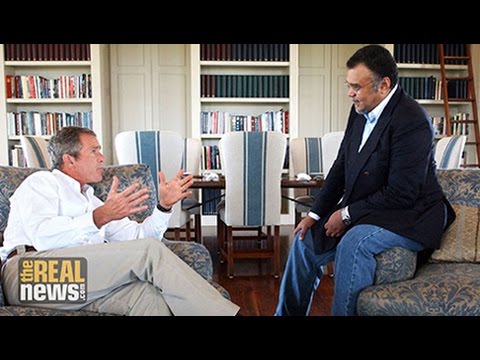 September 11th is the 15th anniversary of the attacks on the World Trade towers in New York.

So now joining us is Senator Bob Graham. Bob Graham was the Governor of Florida from 1979 to 1987, a United States senator from Florida from 1987 to 2005, chairman of the Senate Select Committee on Intelligence, cochair of the bipartisan joint congressional inquiry into intelligence failures surrounding the 9/11 attacks. He’s the author of the book Intelligence Matters: The CIA, the FBI, Saudi Arabia, and the Failure of America’s War on Terror, and also the author of the book Keys to the Kingdom.

Thanks very much for joining us, Bob.

JAY: If you are right that Bandar knew this was going on, then he’s sitting, meeting with his friend President Bush regularly in the days leading up to 9/11, and either not saying anything or somehow does. I mean, I know you know there’s a lot of theory–and, I think, a lot of evidence that would at least require an inquiry–that there’s a deliberate attempt not to know. I mean, to believe that it’s just incompetency, then you have to think it’s like the Keystone Cops of intelligence agencies: they’re just tripping all over each other. But that seems hard to believe.

GRAHAM: Well, and also the fact that it was so pervasive, that virtually all of the agencies of the federal government were moving in the same direction, from a customs agent at an airport in Orlando who was chastised when he denied entry into the United States to a Saudi, to the president of the United States authorizing large numbers of Saudis to leave the country, possibly denying us–forever–important insights and information on what happened. You don’t have everybody moving in the same direction without there being a head coach somewhere who was giving them instructions as to where he wants them to move.

JAY: So that includes before and after the events.

GRAHAM: Primarily before the event. After the event, it shifts from being an action that supports the activities of the Saudis to actions that cover up the results of that permission given to the Saudis to act.

JAY: So could you explain particularly this last couple of sentences, “Primarily before the event. After the event, it shifts from being an action that supports the activities to Saudis to actions that cover up the results of that permission given to the Saudis to act”? So can you elaborate on that?

GRAHAM: Well, and I’ll get to the why question: why would the U.S. government have done this? And let me say, I no longer use the words cover up to describe what’s going on. I find more accurate the words aggressive deception. The federal government has attempted to rewrite the narrative of 9/11 in order to exclude the role of the Saudis from that horrific story.

Why did they do it? I think there are a number of reasons. Some of them relate to the longtime, special, personal relationship between the Bush family and the Saudi Kingdom–goes back three generations to Herbert Walker Bush’s father, Prescott Bush, a senator from Connecticut.

And I think there’s another issue here. And that is, if you’ll recall, at the World Trade Center after 9/11, the president, with a bullhorn, said words to the effect that we are going to follow anyone who was found to have been in any way connected to this murder and that we will follow them to the ends of the earth–pretty strong words. And certainly, shortly thereafter, much of the information that you have outlined became available to the president.

Problem: the president wanted to go to war with Iraq, and he has painted at the site of the crime a path that looks like it’s going directly to the Saudis, but that’s not the destination he wants. So what do you do? You have to suppress all the information that would cause people to think that the Saudis were the people that he was talking about with the bullhorn at the World Trade Center and get the country prepared and willing to go to war against a country which was subsequently found out to have virtually, if not totally, nothing to do with 9/11.

JAY: Right. Bob, I know you have to leave, so I just want to focus on this line: “You don’t have everybody moving in the same direction without there being a head coach somewhere who was giving them instructions as to where he wants them to move.” And that’s in reference to me talking about the various examples of American intelligence agencies that in fact did generate intelligence that could have prevented 9/11 if it had been followed up. And I had asked you if there was a deliberate culture created to the American intelligence agencies of not wanting to know, which in itself could prohibit the sharing of information that people talk about. You mentioned to me in this interview that in the famous memo, bin Laden plans to attack the United States, that in the subsequent memo that usually goes out to heads of agencies, that that was omitted, which one would think would have gone to head of agencies in order to take precautions. You mentioned the immigration, the border official who’s chastised. This was because there’d been a guideline handed down from the White House, if I understand it correctly, not to stop Saudis from coming into the country, even if under normal protocol you would have stopped them. So who’s the coach?

GRAHAM: Well, I think the coach is the president of the United States. He’s the only one who could have commanded agencies, from the Department of State to the Treasury Department, to the intelligence community, to the FBI and other law enforcement agencies, to all act in the same manner, because they are all ultimately responsible to the president.

JAY: So, I mean, that does suggest that given the president’s relationship with Bandar and lots of evidence that Bandar is in the thick of the 9/11 conspiracy, that it’s very likely that this–I don’t know how else to say this–President Bush and, I assume, Dick Cheney, who was up to his eyeballs in this as well, create a culture of not wanting to know amongst the intelligence agencies. And it starts with the demotion of Richard Clarke, who was the antiterrorism czar, and apparently even after George Tenet briefs President Bush: in his first briefing, according to Tenet, he tells Bush the number-one national security threat to the United States is al-Qaeda and bin Laden; and then he demotes the guy who’s supposed to be in charge of the fight against al-Qaeda and bin Laden, Richard Clarke. And is there not at the very least a very strong suggestion that the back door was open for this type of attack? Don’t know that there’s any evidence the White House knew what was coming, but Bandar certainly had a pretty good idea what was coming.

GRAHAM: Again, these are exactly the questions to which I hope that the information that was gathered subsequent to the writing of the 28 pages, in response, in many cases, to the trails that were first outlined–of course, we’ve lost 13 years. We should have been doing this not in 2016 but in 2002, ’03, ’04, ’05, ’06, etc. But we are where we are.

And many people are asking, you know, does it make any difference now, 15 years later? Why don’t we move on? A prominent official in the FBI told me in 2011 to get a life and stop pestering them about this. I think it makes a lot of difference–justice to the families that have suffered so grievously, our national security. The Saudis, thinking that they have a status of immunity from the United States, have continued to fund terrorist organizations and continued to train the next generation of terrorists in Wahhabist mosques and schools, feeling that there’s going to be no negative reaction from the United States.

And I think this has had an enormously detrimental impact on the American people. The presidential election is now well underway, and we’re every day seeing the depth of public cynicism and a sense of disconnection between the government and the people. And I believe that acts of secrecy such as we’ve been talking about are a significant part of that public attitude.

JAY: Can I suggest an alternative theory? If all this is true, what might have motivated it is a real convergence of interests between the Saudi regime and President Bush and Dick Cheney and the neocons around them. We know there’s a document that comes out called Project for the New American Century, which essentially calls for regime change, first of all in Iraq, then in Syria, and the ultimate prize being Iran. And we know the Saudis are extremely motivated to try to overthrow the regime in Iran. They hate the Iranians, and it frames itself as hating Shia. And it’s certainly a convergence of interests between the Saudi government and al-Qaeda that hate Shia probably more than they hate America. And, of course, Bush-Cheney’s stated objective was regime change in Iran. In fact, there was a time when they hoped to go to war with Iran, and perhaps only generals from the Pentagon stopped it from happening, that there was a real convergence of interests to create the conditions of what was called, in that Project for the New American Century, the need for a “new Pearl Harbor”, that they’re conniving in this. There’s no other way to say it.

GRAHAM: A lot of intriguing questions. I hope that we will have some answers. I only hope we don’t have to wait another decade and a half to get at the business of providing those answers.

JAY: That’s very much for joining us, Senator.

GRAHAM: Thank you very much. I appreciate this opportunity and the very incisive questions that you’ve asked. Hopefully we’ll have a chance to do it again as we learn more about this tragedy.

JAY: Great. Thank you very much. 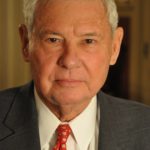 Daniel Robert “Bob” Graham (born November 9, 1936) is an American politician and author. He was the 38th Governor of Florida from 1979 to 1987 and a United States Senator from that state from 1987 to 2005. Graham tried unsuccessfully to run for the 2004 Democratic presidential nomination, but dropped out of the race on…