Bruce Dixon: Black politicians should have pushed for a constitutional amendment to ensure that the VRA never came before the GOP-dominated court

Bruce Dixon: Black politicians should have pushed for a constitutional amendment to ensure that the VRA never came before the GOP-dominated court 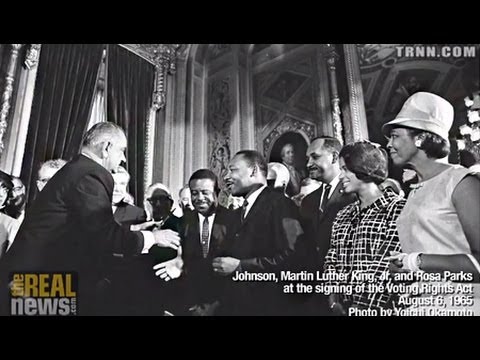 In a 5 to 4 decision on Tuesday, the Supreme Court struck down a key part of the Voting Rights Act. The Voting Rights Act was signed into law by President Lyndon Johnson in 1965 to protect minorities from voter discrimination. Now, with this recent decision, states no longer need permission from the federal government before changing their voting laws.

Here to discuss all this is Bruce Dixon. Bruce is the managing editor of the Black Agenda Report. He’s had an extensive career as a union activist in a string of factories, plants, and workplaces. He’s also a state committee member of the Georgia Green Party.

Thanks for joining us, Bruce.

DESVARIEUX: So, Bruce, my first question is: how did this come to be? And what does this ruling mean for everyday people?

DIXON: Well, the formula that the law is based upon was based on the fact that there was historic discrimination in nine states against blacks, keeping them off the voting rolls. In Mississippi, for instance, only 7 percent of blacks were registered, as opposed to 70 percent of whites, back in 1965 when the law was passed. And so that’s how the nine states were chosen.

What the court argued was that now, since black voter turnout levels have risen to nearly that of whites, or in the case of places like Mississippi higher than that of whites, that no discrimination exists anymore, and so there’s no reason to single out those nine states. Essentially what they’ve done is they’ve gutted the enforcement criteria for the Voter Registration Act. And if there are no criteria to enforce it, then it becomes a dead letter.

Nobody should really be surprised at this, because John Roberts not long ago telegraphed his displeasure at the continued existence of the Voting Rights Act. The last two times that the Congress approved it, he excoriated his fellow Republicans in Congress for not having the guts to vote against it. So apparently John Roberts and the Republicans on the court have taken it upon themselves to do what their colleagues in Congress could not do.

DESVARIEUX: So let’s actually talk about some of these Republicans on the court and this Republican point of view that there is an increasing amount of voter fraud. If you look at the statistics–I’m quoting something from a Rolling Stone article published two years ago by Ari Berman that essentially said that out of the 300 million votes cast between 2002 and 2007, federal prosecutors convicted only 86 people for voter fraud, and many of the cases involved immigrants and former felons who were simply unaware of their ineligibility.

So Bruce, let’s talk a little bit about this and this crusade against minorities that some people are calling this from voting. What does this mean for everyday people?

DIXON: Well, what this is going to mean is that states are free to–states and the federal government, states and local governments, down to the city and county level–and we’ve got 2,000 different counties in the United States–are all free to come up with inventive and creative ways to disenfranchise their minority voters.

For instance, if you’re a county commissioner in places like Ohio in 2004 and 2006, near Columbus Ohio, a city of 1 million-plus people, county officials decided to send all the good functioning voting machines to the white suburbs, while they sent the broken-down voting machines to the black ghettos. And as a result, black voters had to line up for ten hours to wait to vote. If you’re a state official, you can come up with inventive felony disenfranchisement rules, rules that require convicted felons, after they’ve served their sentences, to go through lengthy, lengthy processes to restore their voting rights. If you’re in part of the executive branch in state government, you can come up with voter ID rules. The list of creative things that local and federal officials all over this country have come by to restrict the rights of people to vote is just enormous and a tribute to evil human creativity.

DESVARIEUX: Let’s talk about the executive branch on a federal level and let’s discuss President Obama’s recent comments about the ruling. He says that he’s deeply disappointed. What is your take on the president’s reaction?

DIXON: Well, I’m sure the president is deeply disappointed, because, after all, we have to note that the current black political class sprang into existence as a result of the Voting Rights Act. However, the president’s last job before he became president was as the U.S. senator from Illinois for four years, during which time he served on the Senate Judiciary Committee with John Kerry. Both of them were responsible for vetting Samuel Alito and John Roberts. There was talk–who were nominated by George W. Bush during his term. There was talk of filibustering these gentlemen. There was talk of asking them sharp and pointed questions to reveal to the public their awful right-wing views. But both Senator Obama and Senator Kerry nixed all talk of a filibuster and asked them softball questions, and even voted to recommend Roberts to the full Senate. What they could have done is, for instance, they could have asked Alito and Roberts questions about both of their membership in the Federalist Society, a notorious right-wing legal society that has espoused basically the repeal of the 20th century for more than a generation now. But Obama and Kerry did nothing to block the ascension of some of these very judges that have led in and have made his ruling.

DESVARIEUX: Also we’re hearing from Georgia Representative John Lewis, who is a civil rights leader and helped establish the Voting Rights Act and really fought for it. He’s now saying that he is shocked and dismayed by the decision. Let’s take a listen to what he had to say.

JOHN LEWIS, U.S. REPRESENTATIVE (D-GA): –in disbelief that members of the Supreme Court would take this position. We’ve come a distance, we made progress, but there’s still progress to be made. I think what the Supreme Court did was to put a dagger in the very heart of the Voting Rights Act of 1965. This act helped liberate not just a people but a nation.

DESVARIEUX: So, Bruce, what’s your reaction to this comment? And more importantly, what could have been done to avoid this ruling?

DIXON: Representative Lewis has every right to be shocked and dismayed, because he’s one of the people who marched in the street and created the pressure with illegal and lawless acts that the black freedom movement perpetrated to get this voter rights bill passed back in the ’60s, 48 years ago.

However, what our black political leadership never did is they never followed up their victory in achieving Voting Rights Act by law with a constitutional amendment to further cement and lock down that victory. Without a constitutional amendment, any county official, any state legislator, any governor, and any judge, local or federal, can put any number of blocks to your right to vote, be it felony disenfranchisement, gerrymandering, rigged voting machines, voter caging, and an endless, endless number of things. If we had a constitutional amendment guaranteeing the right to vote, there would have to be a uniform federal standard for who could vote, for how the votes would be counted, for who could run for office, for how voting machines operated, and for a number of things like that that would make all these shenanigans and this ruling impossible. But that is the kind of struggle that our black political class, who owe their existence to the Voting Rights Act, shrink back from. And so the laziness and ineptitude of our black political class is what got us to this point. And apparently they cannot even save themselves, let alone protect our right to vote. What we need is a constitutional amendment to protect the right to vote.

DESVARIEUX: Well, thank you for your insight, Bruce.

DIXON: Thank you for inviting me.

Bruce Dixon is the managing editor of the Black Agenda Report. He has had an extensive career as a union activist in a string of factories, plants and workplaces. He is also the co-chair of the Georgia Green Party.