NSA Whistleblower William Binney says Sen. Feinstein is hypocritical for supporting spying under the Obama administration but only speaking out after her committee is spied on

NSA Whistleblower William Binney says Sen. Feinstein is hypocritical for supporting spying under the Obama administration but only speaking out after her committee is spied on 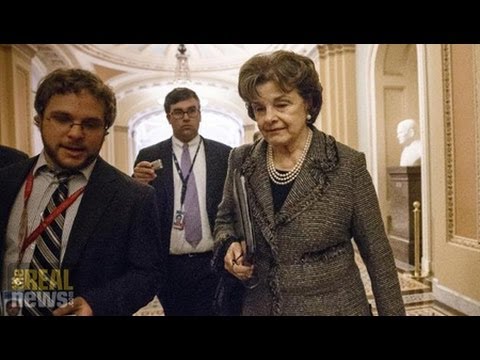 Dianne Feinstein took to the Senate floor to denounce CIA spying into her committee’s investigation of CIA interrogation methods during the Bush administration. Feinstein said the spying might have violated the Constitution and Fourth Amendment, and contested implications by the CIA that documents used in the panel’s investigation were obtained improperly. She accused the agency of intimidation.

CIA Director John Brennan has denied the agency spied on the committee.

Now joining us to discuss this is William Binney. Binney is a former highly placed intelligence official with the U.S. National Security Agency. He turned whistleblower and retired on October 31, 2001, after more than 30 years of service.

BILL BINNEY, FMR. NSA TECHNICAL DIRECTOR: Thank you for having me.

NOOR: So let’s get your response to what Senator Dianne Feinstein said on the floor of the Senate today, a highly publicized speech, you know, saying that the Fourth Amendment and separation of powers protected by the Constitution could have been violated. And what does this say about congressional oversight, the congressional oversight over the U.S. spying agencies?

BINNEY: Well, the intelligence committees of the House and Senate were formed after the Church Committee investigation into the NSA, CIA, and FBI programs. The NSA one was MINARET, the CIA had CHAOS, and FBI had COINTELPRO. And what they were doing there was spying on U.S. citizens who were against the war and so on. And so those committees and the Foreign Intelligence Surveillance Court was formed after the Church Committee investigation into that, to ensure that the intelligence community agencies did not spy on U.S. citizens. That was their charter, and that’s what they were supposed to be doing.

Unfortunately, what’s happened over time is they’ve basically turned and supported the intelligence agencies to do whatever they wanted. And as a part of that process, part of that included spying on U.S. citizens, even as early as 2002 and ’03. In fact, in 2001, they started pulling in metadata on every U.S. citizen. So no one was excluded. This included the House and Senate members, the judges on the Supreme Court and all other courts, and everybody in the country. So all this metadata was being collected early. In late 2001, in October, they started that collection, and then in 2002 they started the internet collection of the equivalent of all the communications of everybody in the U.S. So this is nothing new.

NOOR: And this issue of congressional oversight over intelligence, we’re kind of–we have to trust that Congress actually has power to oversee what’s happening. Is this actually happening?

BINNEY: Well, you see, that’s what this basically says, that now this is an open admission that they have no way of verifying what the intelligence agencies are telling them. I mean, after all, if now they’re being spied on, they’re basically being treated like all other U.S. citizens. We’re all being spied on. But the fact that they came out this way, being surprised by this, tells you how effective their oversight is. In fact, it’s a joke. It always has been. All they can do is trust NSA or CIA or FBI intel and just trust that what they’re telling them is the truth. They have no way of verifying anything they’re being told.

NOOR: And Dianne Feinstein is the one making the speech. She opposed Bush’s spying policies, a strong critic of the Bush administration, but she’s backed spying under Obama. And now that she’s being spied on, she’s making a big deal about this. What’s your response?

BINNEY: Well, it’s hypocrisy, right? I just say that now she should realize that she’s no better than any other U.S. citizen. We’re all being spied on. That’s the unconstitutional part of it. It’s not just the Fourth Amendment, it’s the First Amendment also, because in the First Amendment you have the right to free association. Well, when you pull together all the relationships you have in phones and emails and just even in the metadata, that gives you everybody you have a relationship. That’s why I question the–as someone was testifying to the House Judiciary Committee about IRS spying on people and asking questions, and one of them that was testifying said that they were asked by the IRS, what was their relationship with another person. Well, that tells you that the IRS knows the relationships of U.S. citizens with other U.S. citizens. And where do they get that? They get that from the metadata that NSA collects, because they’re on the Special Operations Division of the Drug Enforcement Agency. So that data is available there to them. Otherwise, they need to answer the question of how did they know that there was a relationship.

NOOR: And so, last point. The CIA has denied this. You have Brennan saying in no way was the spying going on. And he says, we greatly respect the separation of power between the executive branch and the legislative branch. And part two of that question is this is all about CIA torture that the CIA doesn’t want going public.

BINNEY: Right. And basically that’s pretty much a joke, too, I mean, because this kind of spying has been going on since at least 2002 and ’03. I mean, Russ Tice, who was also a whistleblower from NSA, who worked on special access programs, said that he was going through burn bags after hours to see what people were doing, and he was finding transcripts of phone calls of senators, House of Representatives, judges on the Supreme Court and other courts, generals on the Joint Chiefs of Staff, and so on. So they’ve been monitoring and have a special access program–they had one running, according to him. He was prepared to testify to Congress to this, too, and so NSA sent him a letter saying, we agree that you have a right to go to Congress to testify, but we have to advise you that the intelligence committees that you want to testify to are not cleared for the programs you want to speak about.

Now, that fundamentally is an open emission–it’s on the web, too, if anybody wants to look at it–but it’s an open admission by NSA that they are violating the intelligence acts of 1947 and 1978, which require NSA and all other intelligence agencies to notify Congress of all the programs that they’re running so they can have effective oversight, which they’ve never had anyway. But they’re required to do that under law, and it’s an open admission that they’re violating those laws.

NOOR: And, finally, this is all about CIA torture. What does this say about what actually happened at the end of the Bush administration? Will it ever be known? Will all the facts be known?

BINNEY: Well, I’m sure that they want to try to keep it as secret as possible for as long as possible. But, I mean, it’s just–that’s just a reflection of–when Vice President Cheney said, we have to go to the dark side, they really went to the dark side, not just in foreign issues or foreign acquisition of prisoners and torture and rendering, but also internally in terms of domestic spying.

NOOR: William Binney, NSA whistleblower, thank you so much for joining us.

William Binney was the former technical director of the World Geopolitical and Military Analysis Reporting Group and a senior NSA cryptomathematician at the NSA. He worked there for over three decades, and retired after 9/11 as the agency began to implement domestic spying programs that he says are unconstitutional. He is also a whistleblower, having…

What the Coughing Cop Says About American Policing