Supporters of the charter amendment say that privatization would result in job loss and rate hikes because corporations have only one motive: profit

Supporters of the charter amendment say that privatization would result in job loss and rate hikes because corporations have only one motive: profit 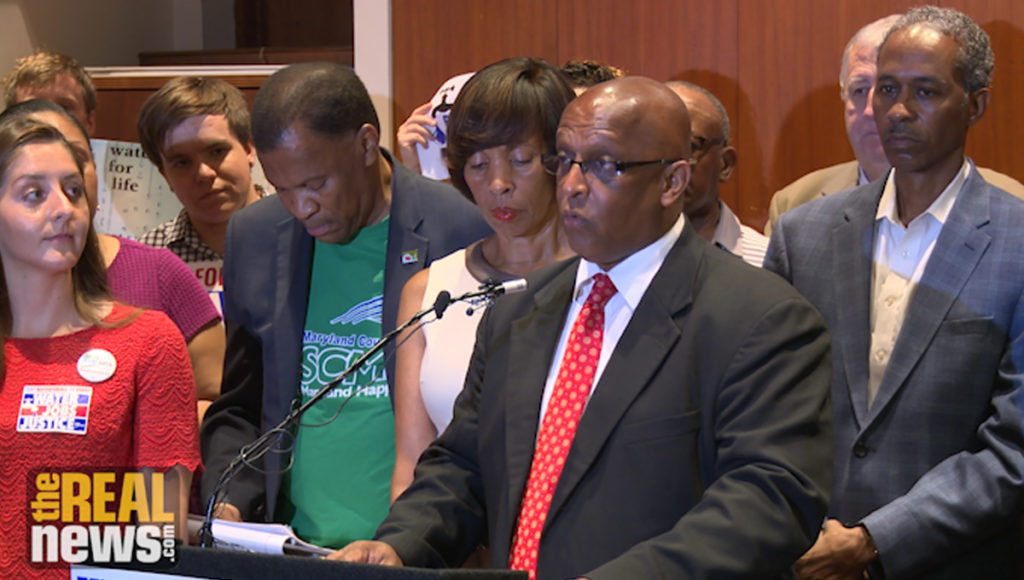 DR. ALVIN C. HATHAWAY: When God created heavens, he first created the water. So we want to make certain that water remains in the hands of the people of Baltimore City, now and forever.

DHARNA NOOR: At a hearing on Monday, City Council voted unanimously to pass a resolution proposed by Council President Jack Young to ban the sale and lease of Baltimore’s troubled water and sewage systems.

BERNARD C. “JACK” YOUNG: Today this council stands here to say enough is enough. With the introduction of this charter amendment we’re closing the door on the possibility of privatizing Baltimore’s water and sewer systems.

RIANNA ECKEL: Water privatization, simply put, is unethical, immoral, and dangerous. Communities that have privatized their water systems see skyrocketing rates, lost jobs, and declined quality of service, because when corporations come in to run water and sewer systems, they have one goal and one goal only, and that is profit not the public good.

DHARNA NOOR: Among the attendees was Mayor Catherine Pugh, who originally proposed the charter amendment at the end of June.

CATHERINE PUGH: I don’t care how folks will double down when trying to buy our water system. It is not an option. It has never been an option under this ministration.

BERNARD C. “JACK” YOUNG: The mayor did, to her credit, have it in her package of charter amendments. But it was locked up with a lot of other stuff that we didn’t agree with, so we just picked out the stuff that we wanted and overlooked that piece.

DHARNA NOOR: If the mayor signs the amendment by August 13, the proposal will go before voters on the November ballot. If it passes, the resolution will amend the city’s charter to preserve public ownership and control over water and sewage systems.

BERNARD C. “JACK” YOUNG: I’m confident the voters in November will overwhelmingly approve this change to the city’s charter that would prevent the destruction of Baltimore water system.

DHARNA NOOR: This would be the first charter amendment of its kind in the country, and the first major citywide ban on water privatization.

DHARNA NOOR: This comes during a crisis of water affordability and accessibility in Baltimore. The city’s sewage system is a century old, and creates major challenges for residents. Under federal consent decree, Baltimore must spend $1.6 billion to repair it. The city says this prompted them to raise water and sewerage bills by 33% over the past three years. Eckel says that if the city’s water were privatized, they’d go up even more.

RIANNA ECKEL: It’s been an enormous amount. The rates have quadrupled in, I think, the past 16 years. We know that the rates are going up a lot, but you know, they’re not going up and adding inflation for corporate profits, inflation for CEOs, inflation for people who are running a corporation.

DHARNA NOOR: City officials have maintained that they’re not trying to privatize the water delivery system.

KURT KOCHER: There are absolutely no plans for privatization.

DHARNA NOOR: But this hasn’t eased fear amongst anti-privatization advocates; especially because last year, lobbyists pitched handing over control of the water system to Suez Environment, a French utility company.

GLEN MIDDLETON: These companies coming in from Europe and other places trying to privatize our water, outsource our jobs, and take take away our jobs from these hardworking public works employees.

RIANNA ECKEL: Water privatization companies have been circling Baltimore ever since 1997. So we’ve seen them really push even harder in the last few years. Veolia was trying to come in in 2014. Suez has been coming in and trying to pitch the city on a 50-year concession lease.

DHARNA NOOR: Advocates say that water privatization would mean a loss of jobs.

GLEN MIDDLETON: And nationally they have said whenever you privatize a contract or outsource, we in AFSCME know that we lose 30-40% of the workforce. These are workers that live, 95% of our workers of AFSCME Local 44 and Housing Authority live in the city of Baltimore.

DHARNA NOOR: And are concerned that it could exacerbate inequality.

RIANNA ECKEL: What they will do is they tend to cut corners when it comes to materials. They will use cheaper pipes, or they will do less maintenance. They will cherry pick areas where they will prioritize maintenance, and that tends to be in predominantly white neighborhoods. So communities of color and low-income communities get left behind.

DHARNA NOOR: They say that the federal government’s antagonism toward public utilities makes this proposal even more historic.

RIANNA ECKEL: Trump’s infrastructure plan has this and essentially incentivized cities to privatize their water system by increasing matching federal funds for cities that will. And so I think this really is a rebuke to that, and to say that we are opposing any and all privatization is so powerful, especially in a climate that’s handing out benefits to corporations left and right.

GLEN MIDDLETON: This bill right here is going to galvanize all of us to work together to make sure we can show them on this local level in Baltimore City, that we can carry this throughout the state and throughout the country, so we can tell people like President Donald Trump to stop privatizing, outsourcing, and contracting out our jobs.