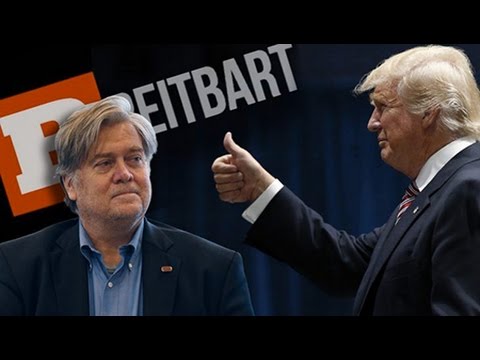 On Sunday, President-elect Donald Trump announced that Stephen Bannon would be his chief strategist at the White House. Steven Bannon is a former naval officer and an ex Goldman Sachs employee and is the executive chairman of Alt-Right, Breitbart News service. He has spent at least the last 8 years brining together various right wing individuals and organizations to attack both the establishment republicans and democrats and push forward his own perspectives of a right wing United States.

To discuss this, I’m being joined by Rabbi Alissa Wise. She’s the director of Jewish Voice for Peace and has just released a public statement on behalf of JVP under the heading JVP on Choice of White Supremacist, Anti-Semitic, Islamophobe, Stephen Bannon as Chief Strategist. I thank you so much for joining us Rabbi Wise.

ALISSA WISE: Thank you for having me.

PERIES: Rabbi Wise, you suggested that Bannon is a white supremacist, anti-Semitic islamophobe but what is it specifically he has done to deserve all of these labels?

WISE: So Bannon’s media outlet, Breitbart, has been the media home of the Alt-Right in the United States. The Alt-Right, now as it’s finding its place in the White House, demands a lot of scrutiny. As we look back on what Breitbart has and what Bannon himself has said about the guests for example that he’s had on the show. For example, Pamela Geller who you might have heard of our campaigns at Jewish Voice for Peace Against Islamophobia because she has put advertisements on the side of buses, on subway stations kind of with the most grotesque and vile and vitriolic depictions of Muslims. His response to her is she’s a real American patriot.

Alright, so this person who has become the face of the most vile forms of islamophobic sentiment is to him, a definition of American Patriot. She appeared not just once but 7 times on his show and she’s just one of multiple kind of figure heads of what white supremacist islamophobia anti-Semitic ideology that he not only engages. Obviously within the media it’s okay to engage with people and disagree with but then goes on to support them. To praise them. To encourage listeners to follow their work and support it. So, that in and of itself is enough to reason to have [inaud.].

There’s numerous examples of his own personal sentiments as far as anti-Semitism goes which we at Jewish Voice for Peace only to be able to understand in the context of islamophobia and the context of white nationalism and white supremacy is his complaining that there were too many Jews in his children’s school. That in and of itself might not be concerning. But when you have a picture of a person who is really the god father of the Alt-Right movement whose kind of foundation is white supremacy and white nationalism.

PERIES: Rabbi, so Stephen Bannon as Chief Strategist for Trump is obviously going to be setting the stage for national discourse and it’s really problematic given the examples you just provided us. But by appointing him, obviously Trump is prepared to take some of the flack for this and the consequences of such an appointment. It’s also not unusual for a president who has just run for election and someone has assisted him in that endeavor to get appointed to some prominent position within the White House. But this one is particularly colored with a certain history. Do you think that he will be able to continue with such an appointment on his set of advisors or counselors as he has done? Because sometimes these appointments get appointed and soon after a public reaction or outcry, they get either dismissed or moved to somewhere else less prominent. What are your thoughts on that?

WISE: Well I certainly hope not. I know the Southern Poverty Law Center whose work it is to track white supremacist and is has called for action to kind of resist and fight this appointment. I’m hoping that people will respond to that and encourage to be rethought. Even if there’s a new Chief Strategist appointed. It still remains that this is a choice that Donald Trump thought was appropriate. A person who has an open embrace fervor in and of racism and xenophobia, islamophobia, anti-Semitisms. I think it’s really significant because in the wake of this election we’ve been hearing some let’s see what he does, let’s give him a chance. Here’s one of the first things that he’s done. It just is a further confirmation of exactly what you saw throughout his campaign which are those – the hallmarks of his campaign really. It’s really just a confirmation of what we’ve seen, even if Bannon is replaced with somebody even a bit more moderate.

PERIES: Rabbi Wise, apparently Prime Minister Netanyahu had called Donald Trump upon his victory and congratulated him and Donald Trump said that Netanyahu would be one of the first people invited to come and visit the White House. How does this jive when he’s just appointed somebody who’s so anti-Semitic and is now going to be representing Trump at the White House? How does he deal with a Netanyahu and is there always some sort of similarities between the right wing governments here?

WISE: Right. Well it’s a really interesting question. I think kind of, it makes us and people in the Jewish community confront kind of the inherent contradictions between Israel claiming to be a Jewish state in the active interest of all Jews and align itself with Trump who is aligning himself with anti-Semitism. So, there’s a very glaring contradiction that’s being brought to light here which for our work at Jewish Voice for Peace, we see this as mirror of what we’ve been watching with horror over the past decades as Israel’s far right government deepens the violence, hatred and repression of Palestinians and kind of non-Jewish citizens of Israel and we are kind of bracing ourselves seeing that Trump and Netanyahu alliance.

This is going to be actually a very significant moment for Jews where they’re going to, 76% of the Jewish community voted for Clinton. So, the [inaud.] are now going to have to be faced with Trump, this person who represents so many reprehensible things that go against their values and see the right wing government of Israel embrace him and cheer his victory. So just as we don’t sit idly by and watch Israel kind of a displace and violate Palestinian rights, we [inaud.] the same here in the US.

PERIES: Alright, we’ll be watching closely as I’m sure you will be. What do you suggest to those people who are feeling like you are in terms of these appointments and Trump taking the White House? You know there are protests happening across the country in the last few days. But what do you suggest that people do in order to protest this appointment and much more that might be coming?

WISE: That’s a great question. I think one of the hallmarks of the movement for justice in Palestine in the past number of years has been a boycott divestment and sanctions movement and at the heart of what that movement is noncooperation with the status quo. I think that’s what’s called for now here. We need to refuse to cooperate with the policies of the Trump administration that are racist sexist and islamophobia, anti-Semitic or otherwise infringe on civil liberties. You know this is a time for people to deepen their commitment to organizing and find the community organizations that best reflect their values and take part. This is a moment where the organizations and the movements that have been building for decades are really well prepared to hit the ground running in this time and so we need each other both emotionally in this time but we also need each other because it’s only going to be a grassroots movement that will be able to ensure that peoples’ rights and safety are protected during this dangerous time of Trump’s administration.

PERIES: Rabbi Alissa Wise, I thank you so much for joining us.

WISE: Thank you so much for having me.