We speak to Julian Assange's lawyer, Jennifer Robinson, about the first extradition hearing Assange had in London, where he refused to voluntarily turn himself over to US authorities

We speak to Julian Assange's lawyer, Jennifer Robinson, about the first extradition hearing Assange had in London, where he refused to voluntarily turn himself over to US authorities 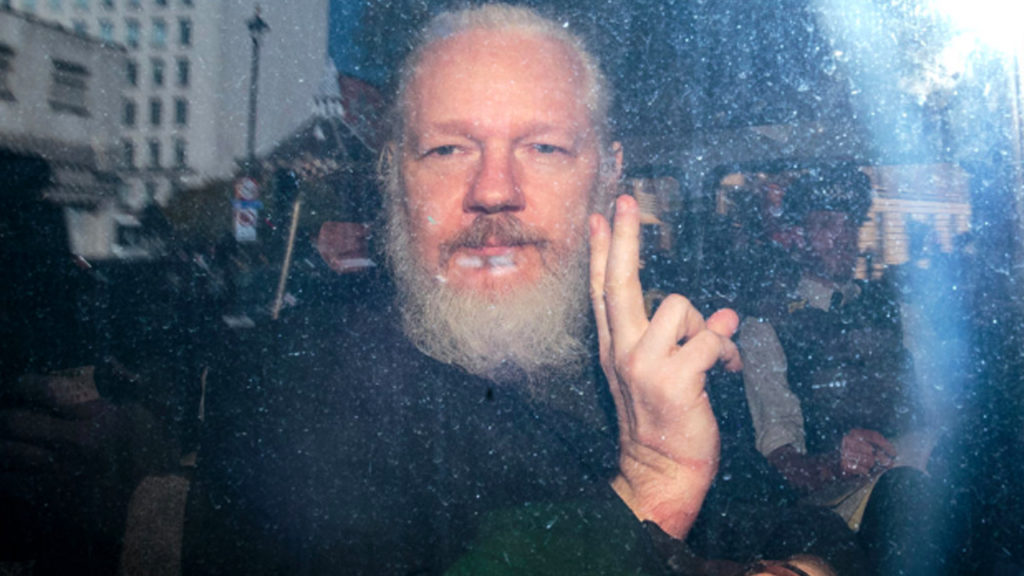 GREG WILPERT It’s The Real News Network and I’m Greg Wilpert in Baltimore. WikiLeaks founder Julian Assange faced his first extradition hearing in London on Thursday in which he declared that he does not want to be extradited to the United States on charges of conspiring to hack a military computer. Assange and his supporters though, argue that the case is really about punishing someone who published embarrassing information that the US government wants to keep secret. Shortly before the extradition hearing, Assange had been sentenced to 50 weeks in prison in the UK for violating bail conditions. Assange is now being held in a maximum-security prison even though he was never charged with having committed a violent crime. We’re now joined by Assange’s lawyer, Jennifer Robinson. She is an Australian human rights lawyer and barrister with Doughty Street Chambers in London. Thanks for joining us today, Jennifer.

GREG WILPERT So let’s start with the 50-week prison sentence that Assange received so far for violating bail. What’s your reaction to the sentence and are there any plans to appeal it if that’s even possible?

JENNIFER ROBINSON We are very disappointed with the nature of the sentence that was handed down this week. It is incredibly harsh, at the far end of the spectrum of what’s even possible for bail breaches and certainly in light of the evidence that we put about and the reasons that Julian Assange sought asylum in the first place. Of course, the breach of bail conviction relates to his decision to go into the Ecuadorian embassy in 2012 and seek asylum. And that was because he was concerned about the risk of extradition and being sent to the US to face prosecution for his publishing activities with WikiLeaks. That’s precisely what’s happened. But unfortunately, the judge was not very sympathetic with that and he got a sentence that in our view is disproportionate to the nature of the crime that’s been alleged against him. Breaching bail is not a serious offense.

GREG WILPERT So let’s turn to the extradition hearing itself. There are some estimates in the press that this process could take years. Do you believe that this might be the case, or will there be a concerted effort on the part of the UK and US authorities to expedite the process?

JENNIFER ROBINSON US extradition proceedings usually take about a year to complete, but in a case like this which will be fought very hard by Assange’s defense team because of the fundamental questions about free speech that it raises, this could go on for many years yet. Julian will of course remain in Belmarsh Prison serving out the sentence in relation to the breach of bail, but nevertheless even once that sentence is over, it is likely that the authorities will try to keep him in prison on remand while we fight the extradition proceedings. So it is going to be a very big and long fight.

GREG WILPERT And now regarding the arguments on the US aside, what will the decision for an extradition be based on? Do they need to prove that Assange actually participated in the hacking effort that he’s being accused of and that he’s denying, or are there other issues that need to be proven on their part?

JENNIFER ROBINSON Questions of proving the factual allegations in the warrant and in the indictment, are for a criminal trial in the United States, but of course we hope that it never gets that far. We will be resisting extradition here and defending him against being sent to the United States precisely because this case raises such fundamental questions about free speech. The indictment if you look at it, and the factual allegations that are made, it really boils down to a journalist and a publisher communicating with a source, asking that source to provide information, and having conversations with the source about how to protect their identity. This is the kind of activity that journalists and indeed good journalists should be having all the time. That’s why we heard Julian say in the hearing yesterday, which was just a procedural hearing, that he would not consent to extradition because he would not be extradited for having done journalism. That would be a key part of the arguments that we make. We’re also obviously concerned about the treatment that he would receive once he’s returned to the United States. We need only look to the way that Chelsea Manning is being treated, treatment that the UN said amounted to unusual and degrading treatment. And we’re concerned about the politicization of this case. WikiLeaks has been a key subject of discussion in the United States and US politicians and officials [have been] calling for him to be killed by drone strikes. These are very serious issues, and these are all issues that we’ll be raising in our case here in the UK.

GREG WILPERT Now here on The Real News Network, we in the past spoke to Ecuador’s former Foreign Minister Guillaume Long who has talked about the extremely difficult conditions under which Assange was granted asylum in the Ecuadorian embassy in London, especially over the past year. What are his prison conditions like now? Has the situation at all improved, or has it gotten worse? What’s the situation?

JENNIFER ROBINSON Of course for more than six and a half years, the time in which Julian was in the embassy, he was confined almost to a room, had no outdoor access for exercise purposes, and was denied medical treatment. The British authorities refused to allow him to leave the embassy without giving up his asylum status to seek medical treatment. So we were very concerned already about the long-term impact this was having on his health. His health and his well-being had significantly deteriorated. I think everyone saw that when they saw the footage of him being dragged out of the embassy by the police. It was visually obvious, but now he’s inside Belmarsh Prison, which is a high-security prison here in the UK and significant concerns have been raised about the standards and the conditions in that prison for the whole prison population. Julian himself has been inside his cell almost all day long, every day. At least now he’s getting medical treatment. We remain very concerned about his health, but the conditions inside that prison are very tough and he’s finding it very difficult.

GREG WILPERT Now if the extradition process takes more than the 50 weeks that he’s supposed to be held so far for the bail violation, will he be able to leave the prison while the extradition hearings continue if they last longer than that?

JENNIFER ROBINSON That remains to be seen. He will of course have to serve out at least half of the sentence that was granted. As we heard from the judge on Wednesday, at Wednesday’s hearing when the sentence was handed down, he will have to serve at least half of those 50 weeks in prison and after that would otherwise be released on what we call license here, conditional upon not committing another crime. But because of the US extradition proceedings, it remains to be seen whether the prosecutors will insist that he remains in prison. So it may well be that he has to spend more time in prison even after having served the sentence because of the US extradition request.

GREG WILPERT Now what could happen now? You already touched on this, but I want you to go into a little bit more detail. What could happen to Assange if he reaches US soil against his will?

JENNIFER ROBINSON Well we are very concerned given the widespread speculation in the American media over the past couple of weeks since he was arrested, that the US may well seek to add additional charges to the indictment against him once he’s back in the US. We are very concerned about that prospect. We’re also concerned about the politicization of this case. Dating back to 2010, you’ve had politicians calling him to be to be killed and I think post the 2016 publications in relation to the US election, Donald Trump’s election, and some of the comments that have been made by figures within his administration. For example, Mike Pompeo as Director of the CIA and now Secretary of State said that WikiLeaks was a hostile, non-state intelligence agency, that he would take them down, and that if prosecuted, Julian Assange should not benefit from the first amendment protections. This is a very serious statement to make from a key member of the Trump administration. And I think that everyone ought to be thinking very carefully in the US about what this indictment and prosecution would mean to media freedoms in the US because the indictment itself covers, if you read it in close detail and get beyond the Department of Justice press release headline referring to hacking, there is no suggestion that Julian Assange hacked material. There’s no suggestion he even helped Chelsea Manning hack material. It’s simply about discussions about protecting identities, about the discussions with a source about how to and what information to provide. These are actions that journalists do all the time and I think it will have a massively chilling impact upon investigative journalism and that’s why free speech groups in the US have been stating their concern about the nature of this indictment and what it will mean for the media.

GREG WILPERT Okay. Well we’re going to leave it there for now. I was speaking to Jennifer Robinson, Julian Assange’s lawyer in Britain. Thanks again, Jennifer, for having joined us today.