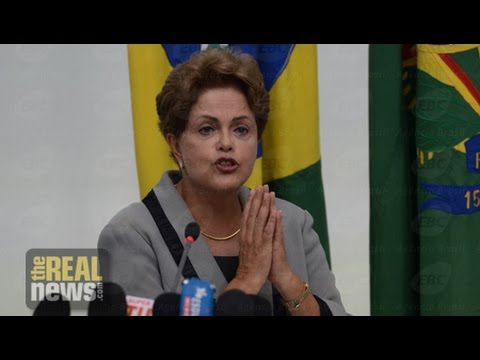 The government of Brazil has recently been under siege from a variety of different directions. Just a few days ago President Dilma Rousseff’s main campaign manager, Joao Santana, was arrested and charged with a massive corruption scheme, in which he has alleged to have accepted $7.4 million in bribes. This is just the latest crisis for Rousseff, who has seen other close associates face corruption charges, and has herself faced impeachment charges towards the end of last year. On top of that, Brazil’s economy is in serious trouble and is predicted to shrink by 4 percent this year.

Joining us to talk about the current situation in Brazil is Professor Alfredo Saad Filho, who teaches development economics at London University, and is originally from Brazil. Thank you, Alfredo, for joining us at the Real News today.

WILPERT: So first of all, I just want to start into the issue of the corruption scandals. As I mentioned in my introduction, it seems like accusations of corruption so close to President Rousseff, combined with all the other problems she is facing, is making her government increasingly unviable and unmanageable. What is your evaluation of these corruption scandals? Are they serious, and what effect are they having on the Rousseff administration?

FILHO: This succession of corruption scandals around the president of Brazil is of extreme gravity, extreme seriousness. They have contributed to her almost complete political isolation in the country. It is important to point out that one, there is no allegation that the president herself was involved in any, anything illegal, remotely. Not at all. But two, this is part of a barrage of attacks, coordinated attacks that the president has been receiving from the media, from the political opposition, and from within sectors of the federal administration, particularly the public prosecution office and the federal police, that are coordinated in a manner to damage the government. So there is a political aspect to this. We are not talking about a conventional criminal investigation at all.

WILPERT: I see. And what effect is this having on her ability to govern the country?

FILHO: It has been extremely difficult for President Rousseff to govern the country. She has a small minority in Congress, she is almost unable to pass legislation, virtually unable to pass anything that actually matters, and her relationship with most political parties in the country, including parties that until a few months ago were in her own coalition, her relationship with those parties has deteriorated to a very large extent.

So it is very difficult to see how she’s going to recover the ability to govern the country effectively.

WILPERT: On top of it all, last December conservatives in the legislature launched an impeachment process against her, which now seems to have stalled or been abandoned, presumably because the main conservative politician behind it himself has been accused of corruption. Do you think that this impeachment proceeding will come up again, and if so, what do you think are its chances of success?

FILHO: This is absolutely sad, and it is extraordinarily amusing at the same time. There are repeated accusations of corruption being waged against most prominent politicians in Brazil. Almost without exception against Dilma Rousseff, as I mentioned previously, nothing has been raised. But against former president Lula, for example, there has been consistent, deliberate attempts to implicate him in anything that might stick. And these are repeated attempts, as I had, as I mentioned.

Now, President Rousseff herself has been the subject of impeachment proceedings. This is just one part of an attempt, a coordinated attempt, to evict her from power. This was attempted through the president, or the speaker of the chamber of deputies, the lower house, in Brazil. But as you mentioned, the speaker himself has been implicated in a succession of scandals, and is being currently prosecuted both in Brazil and in Switzerland for malfeasance on a massive scale.

So for that reason, for the lack of viability of the impeachment due to this event, the process has effectively been abandoned. The next attempt by the opposition has been to try and find out something irregular concerning Dilma Rousseff’s campaign finance back in 2014. And this is the context in which you opened your story tonight concerning the person who was in charge of campaign marketing for Dilma Rousseff, he has recently been detained.

Now, is there a financial problem? I don’t know. What I do know is that campaign finance in Brazil traditionally since forever, since the, since the time of the empire in the 19th century, has been enmeshed in a confusion of exchange of favors, illegal finance, and all sorts of corruption on a large scale, potentially. So wherever you dig, you will find [inaud.]. You will find illegalities almost wherever you dig. And this has come to haunt, come back to haunt Dilma Rousseff. And potentially it can be, this can be disabling, but that may be a case in the country’s supreme electoral court that technically might lead to the annulment of her own election back in 2014. These are legal possibilities. Whether or not this will actually happen is a political problem, and it depends on events in the country and the correlational forces in parliament, and in the supreme electoral court.

WILPERT: Of course, these corruption scandals are just one aspect of the different ways in which Dilma Rousseff is besieged at the moment. The other one I mentioned also in my introduction was the economic situation. That is, last week, for example, the Organization for Economic Cooperation and Development presented a new estimate saying that they estimate the economy is expected to shrink by 4 percent this year. Also, just yesterday Moody’s rating agency was the third agency to rank Brazilian bonds as junk bonds. Do you think that these estimations by Moody’s and the OECD are realistic? And if so, what would you say are the causes of Brazil’s poor economic performance currently? Is it just the low commodity prices, or is there something else at work?

FILHO: The estimation by the ratings agencies are realistic in the sense that the Brazilian economy is facing a perfect storm of political and economic disasters. Now, the economic difficulties of the country are not unique to Brazil, and this is important to highlight. All middle-income countries are now facing the third wave of the global crisis that started in the United States back in 2007-2008, and then propagated across the advanced economies. The second phase came a couple of years later in the Eurozone, and now the crisis hits the middle-income countries. So across the middle-income countries, China, Turkey, Brazil, Argentina, South Africa, all these countries, Russia, are having very, very serious economic difficulties.

Now, Brazil is certainly the worst case. The most affected country [inaud.] contracted by 3.5 percent last year. It might contract by another 4 percent this year, as you mentioned. And that comes from, one, the decline in commodity prices and the slowdown in the global economy. So Brazil’s main export markets have contracted significantly, and the price of its main commodity exports has declined. Two, Brazil has suffered very severely from the ending of quantitative easing in the United States and in the UK. So capital is now moving back to the advanced economies, and Brazil has been hemorrhaging capital for the past several months thanks to the exchange rate and the capacity of [inaud.] to invest.

And the third problem is the domestic political problem. There is effectively today an investment strike going on in Brazil. Dilma is isolated from investors and from capitalists in the country who refuse to invest the environment in profound uncertainty, and the economy is then paralyzed by all this, plus the fiscal constraint measures that the government itself has imposed in an attempt to regain the so-called confidence of the markets. In doing this, the sources of demand have disappeared in the Brazilian economy, and it is now almost in freefall.

WILPERT: Do you see any other, any solution or any way out for Dilma Rousseff in this severe economic and political crisis that her and her government currently find themselves in?

But in the process of doing so, the government has implemented a quite [inaud.] box, contractionary fiscal and monetary policies that have isolated the government again from the traditional base of support of Dilma’s own workers party. So at the moment right now, as we speak, Dilma is heavily isolated from her own political organization, making her certainly the Brazilian president with the greatest degree of political isolation and inability to move in the last half-century. It is really tragic for her and for the country.

WILPERT: Thank you, Alfredo, for joining us in this very interesting analysis of the current situation in Brazil.

FILHO: Thank you. Thanks very much.