Kate Sinding and Adam Scow discuss the current legal loopholes for industry that exempt fracking operations from regulation, and the issue of job creation through developing alternative energy sources

Kate Sinding and Adam Scow discuss the current legal loopholes for industry that exempt fracking operations from regulation, and the issue of job creation through developing alternative energy sources 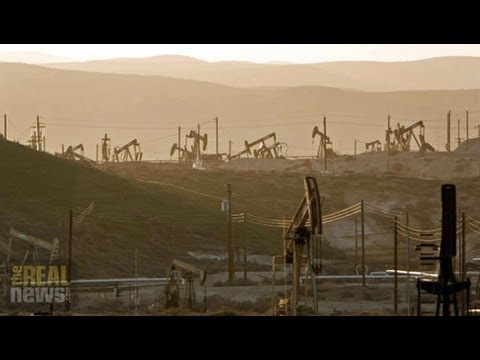 Here’s an interesting fact. One in 20 Americans now live within a mile of a fracking well. That’s according to The Wall Street Journal‘s own analysis.

Now environmentalists are pushing for the slowdown of this drilling bonanza, as study after study reveals correlations between fracking, earthquakes, and polluted groundwater.

A recent report published in the journal Science compiled the results of more than 200 different studies on fracking and found that America’s total methane emissions from natural gas extraction and production is about 25 to 75 percent higher than what the EPA estimates. That’s of major concern, since the EPA says methane’s possible effect on climate change is 20 times greater than carbon dioxide. It’s left many wondering if natural gas is truly a greener alternative.

On February 28, the Los Angeles City Council approved a moratorium on fracking, which is leaving open the possibility of a statewide ban.

Now joining us to discuss all of this are our two guests.

And also joining us is Adam Scow. He is the California director at Food & Water Watch.

DESVARIEUX: So, Adam, I’m going to start off with you. You’re on the ground there in California, and I know you were campaigning for this moratorium. Can you just first of all speak to what communities were actually affected in L.A. by fracking? And is this really a done deal?

SCOW: Well, thanks for having me. There’s many communities affected by fracking and oil extraction in Los Angeles. Oil extraction is not new to L.A. L.A. has historically had oil fields. They have the largest urban oil field in the country. It’s known as the Inglewood Oil Field. And many of these oil fields were thought to be going out of production, and some were going to even be converted into parks. But in the last ten, 15 years, we’ve seen an explosion of fracking and other extreme forms of extraction in California and throughout the country. And those fields have been targets for the oil companies that have gone back to them and are starting to frack–they’re starting to use hydrochloric acid, a really nasty acid, to stimulate wells. And they’re doing it literally in people’s back yards. The effects have created health problems, air quality problems. And as we’re in the m idst of a drought in California, concerns about its water use. It’s not just the groundwater that is threatened. When they frack, they’re mixing fresh water with lots of chemicals and taking it out of our systems. So, for those reasons, communities who are impacted in South Central Los Angeles [incompr.] some on the west side, right by USC, banded together and worked with two leading city councilmembers, councilmembers Paul Koretz and Mike Bonin. And last Friday we were able to succeed in getting the L.A. City Council to pass a moratorium. Now, this was the first step. They are going to be working with the city attorney to write the language. And then they will have to bring that back to the council for ratification. We expect that to happen sometime this summer.

DESVARIEUX: Okay. Let’s get to the questions about the legal issues behind fracking. Kate, I want to turn to you, because it seems like this ban on fracking is taking place city by city, state by state, but there really isn’t a federal effort, or at least a federal law that is really covering fracking. And from my understanding, it’s actually excluded from the Safe Drinking Water Act and the Clean Air Act. Can you just explain these loopholes?

SINDING: Sure. Yeah, you’re absolutely right. One of the reasons that cities like Los Angeles and, really, towns across the country, from Colorado to Ohio to Illinois to New York have been taking matters in their own hands or banning or putting moratoria on fracking within their limits is that it’s–this is an industry, the oil and gas industry, that has historically been exempt from many of the nation’s bedrock federal enviornmental laws that are designed to protect public health and the environment.

In the case of fracking, there are even more special exemptions that industry enjoys beyond those enjoyed by the industry as a whole. One of the more famous–or infamous, I suppose you would say–exemptions is frequently referred to as the Haliburton Loophole. And this is a provision from the 2005 Energy Policy Act that expressly excluded fracking from regulation under the Safe Drinking Water Act, which as its name suggests, is the law that’s designed to protect public drinking water supplies.

But in addition to that exemption, which is the most direct one that says the federal government EPA cannot regulate fracking. The industry also enjoys exemptions from almost all of the other major federal/environmentla laws. It enjoys exemptions from the Clean Air Act, from the Clean Water Act, from the laws that govern waste disposal and generation. And so there’s really no uniform set of minimum federal standards , and instead it’s left to the states. And what we have is a real patchwork of legislation across the states. And that’s why so many communities are concerned and wanting to take matters into their own hands.

DESVARIEUX: I’m sure I could even, like, hear our viewers shouting at their computers. How are they able to even get away with something like that?

SINDING: It’s politics. You know, it’s the classic sort of story. It’s a powerful industry. It’s the moserful, richest industry in the world. And so what you have is a pattern of this industry using its influence within Congress to get itself exempt from the laws that apply to every other industry that’s not as powerful, including, of course, clean energy.

DESVARIEUX: Alright. I’m going to present to you both the counterargument for fracking, ‘caues you have those who are saying, you know what, this actually creates jobs, you’re going to see more energy-independent And it’s going to lower the cost of electricity for Americans. What’s your take, Adam? Can you resond to that?

SCOW: Yeah, absolutely. Well, on the jobs I know that’s something where some people are afraid to talk about that, because, yes, there are some jobs. But what’s really interesting is we looked at a California solar industry, which is–has a lot of potential. It’s been increasing quite a bit in the last couple of years. And we now have about 47,000 jobs in the solar industry alone here in California, leading the nation. And yet we’re only at 2 percent of our state’s electricities being powerd by solar, whereas if you look at Germany [incompr.] going 15, 20 percent, and they don’t get as much sun as we do.

And so we looked at the oil industry, some of their employment figures, and we looked at Kern County, which is the south edge of the San Joachim valey, where about two-thirds to three-quarters of the state’s oil reserves lie. And that’s really where a lot of the fracking’s been taking place in the big oilfields there.

And we looked at employment statistics for just Kern Country, and they have about 13,000 people working in extraction for oil and gas. And this is where two-thirds of the state’s oil lies. And so looking at that ratio alone, we have way more job creation potential in clean and renewable energy. And we’ve got to remember the jobs, these fracking jobs, they’re temporary, they’re very dangerous, and they’re only going to last as long as the oil is extracted. So we are flipping that argument on its head in support of clean energy.

The other thing about energy independence, here in the Bay area and in Los Angeles we are seeing a move to expand refineries, to process dirty oil from California or from North Dakota, where it’s coming in by rail, creating another health hazard, and a lot of that oil is already being increasingly exported overseas. We’ve got to remember oil and gas industries are multinational corporations, and they oil and gas is sold on an international market, and the prices they can get for the oil and the gas in Asia and China and India, growing markets, is way higher. And that’s exactly what we’re seeing.

At the same time we’re seeing increasing energy efficiency in California, we can do a lot more. And energy demand continues to decline, despite population and economic growth. So the argument that this is going to make us energy-independent is really false and misleading.

DESVARIEUX: Alright. Adam and Kate, thank you both for joining us.

SINDING: Thanks very much for having me.

Thank you so much for joining us on The Real News Network.

Kate Sinding is a senior attorney and deputy director of NRDC’s New York program. She specializes in New York urban and regional issues, including a variety of energy, land use and solid waste matters. In recent years, she has particularly worked to address the threats of expanded gas development using fracking in New York and…

Adam Scow is the California Director at Food & Water Watch. Adam oversees the California organizing program, which tackles some of California’s greatest challenges to the long-term health of its water, energy and food.