As Saudi Confirms Khashoggi’s Murder, Will We Stop Its Murder in Yemen?

Hours after this segment was recorded, the Saudi government confirmed the murder of Jamal Khashoggi. But there is ongoing silence over the US-backed Saudi war on Yemen, which has killed tens of thousands and is threatening a historic famine. We speak to Dr. Martha Mundy of the London School of Economics, author of a new report that accuses of Saudi of a deliberate campaign "to destroy food production and distribution" in Yemen.

Hours after this segment was recorded, the Saudi government confirmed the murder of Jamal Khashoggi. But there is ongoing silence over the US-backed Saudi war on Yemen, which has killed tens of thousands and is threatening a historic famine. We speak to Dr. Martha Mundy of the London School of Economics, author of a new report that accuses of Saudi of a deliberate campaign "to destroy food production and distribution" in Yemen.

The Murder of Jamal Khashoggi

Report by Dr. Martha Mundy, "Strategies of the Coalition in the Yemen War" 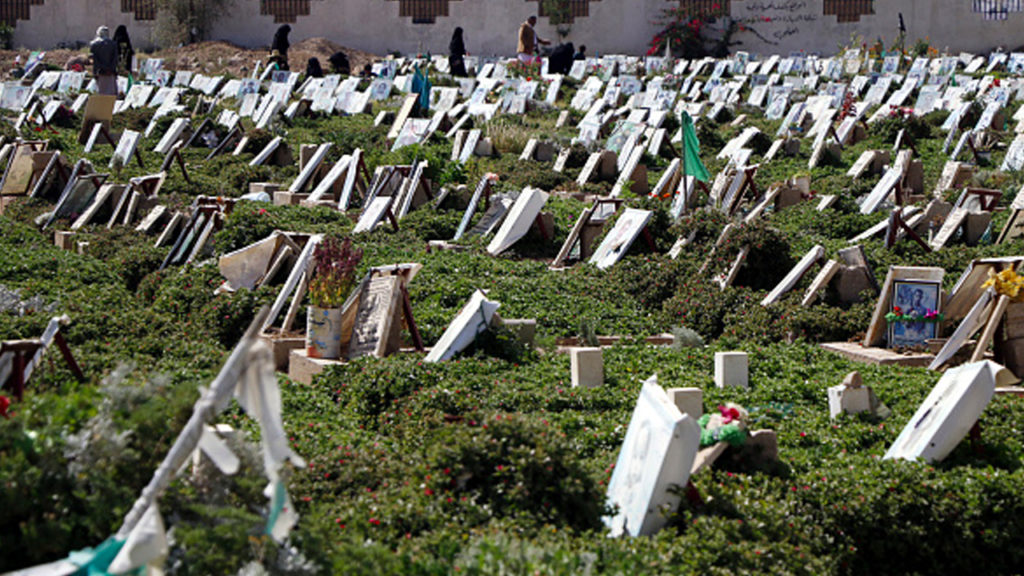 Report by Dr. Martha Mundy, “Strategies of the Coalition in the Yemen War”

The disappearance and likely murder of Jamal Khashoggi has put Saudi Arabia under the microscope like never before. There is growing talk in Washington of a serious breach in the decades-old U.S.-Saudi alliance. But compare the outrage over Saudi’s apparent murder of one person versus the silence over its murder of tens of thousands of civilians in Yemen. This week the UN warned that because of the ongoing U.S.-backed Saudi-led military campaign, Yemen faces the world’s worst famine in 100 years. Lise Grande, the UN’s humanitarian coordinator for Yemen, spoke to BBC News.

LISE GRANDE: I think many of us felt as we went into the 21st century that it was unthinkable that we could see a famine like we saw in Ethiopia, that we saw in Bengal, that we saw in parts of the Soviet Union. It was just unacceptable. Many of us had confidence that that would never happen again. And yet the reality is that even that in Yemen that is precisely what we are looking at. We predict that we could be looking hat 12 to 13 million innocent civilians who are at risk of dying from the lack of food.

SPEAKER: Do you think we should be ashamed?

AARON MATE: Joining me to discuss famine in Yemen, and Washington’s complicity and silence over it, is Dr. Martha Mundy. She is professor emeritus of anthropology at the London School of Economics, and a specialist in Yemen’s agriculture. Welcome, Dr. Mundy. You just put out a report for the World Peace Foundation on the Saudi-led coalition’s bombing of Yemen and its impact. What can you tell us about it, especially in the context of these warnings we’re hearing now about the worst famine in 100 years?

MARTHA MUNDY: We see with the Ministry of Agriculture a pattern for the first year and half of the war, which is backed also by the runs of the Yemen Data Project. They corroborate each other. And that shows that while in the first months of the war- that is to say from March through early August 2015- it was indeed an essentially military strategy to defeat the, at that point, the Saleh- and let’s call them Sana’a-based, Saleh and the Houthi forces. And when that didn’t work, from the second half of August, and particularly in September and October, one noticed, although it began earlier in June in Sa’dah province; that is, the far North Province where the Houthis stemmed from.

But in September and October the coalition bombing went wild in the rural areas, quite across the country, but with great focus on the wider area around Sana’a and Sa’dah. And to a lesser extent the coastal plain, which is called the Tehama, which has three administrative parts to it. And that that was the first evidence that one bumped into of real targeting of rural food production; it includes roads, markets, farms. Animal farms, chicken farms. But also all these state extension services that supported agriculture.

So based on that, and then charting- it slows down. There is a period of negotiation in spring of 2016. But in spite of that damage to- which is doubled, of course, by attacks on factories; particularly down in the Tehama and around Sana’a, which were food and water processing factories. And that’s well documented by journalists, because often they were in Sana’a, but also by the Yemen Data Project material.

But when in the autumn of 2016- by the autumn of 2016, surrender had still not been achieved, in spite of the massive destruction, then an economic war was essentially launched. And there, again, it is not often discussed the role of the UK and the USA in maintaining the silence. And I could talk much more about the flow of information from Yemen in the run up to the war, during the early part of the war, and to today, because the international organizations that were so important to the generation of information about Yemen for the first year and a half of the war and until it was declared that they could return as humanitarian organizations, they they basically shut down their support to any of the Yemeni ministries in generation of information about damage. The only great exception was the ILO, that worked with the center statistical office of Yemen in a report that came out in early 2016.

AARON MATE: Dr. Mundy, just to clarify here, who shut down the support for these organizations? It was Western governments?

MARTHA MUNDY: It was Western governments who withdrew their personnel from the embassies. And there was an order that went out. I asked the regional head of FAO, the Food and Agriculture Organisation of the UN, in a meeting. It’s mentioned in the report exactly when it was; in 2016, I think. I asked him why they ceased their support for what are really technical matters, we agree, for agriculture. And he said it was a political decision.

AARON MATE: OK. So the implication there, then, is that Western governments that provide the support and funding for these types of technical operations withdrew their support, so that there was a lack of accurate information on the scale of the Saudi destruction of the country that the U.S. and UK were supporting?

MARTHA MUNDY: Yes. I think that is a strong summary of what one must deduce from that. And that was the case through the first year and half of the war, at least. And the information since then has- there are projects that- by the way, some of the NGOs carried on. Oxfam, Medicienes sans Frontieres. And they were issuing reports. But they obviously have a much smaller database than the big international organizations. The World Bank was extremely powerful in Yemen before this, before the war, and the U.N. agencies have in generating information on damage.

In the report I also discuss that there are specialized agencies for damage assessment; also from aerial photography, which can be extremely detailed for Yemen, since it’s a very arid climate with little cloud cover. But essentially after the first couple of months they were releasing no major mission until, again, this year a little bit.

So I think there has been a lack of funding. Not all the people in these organizations may be happy about that decision, but which I can only- I mean, the FAO man was the only one I’ve asked about that. But that was a very open, off-the-record but public, response to my question, yes.

AARON MATE: Right. So in terms of what you’ve documented in your report, the deliberate targeting of food production and distribution- and you’ve laid out a very detailed summary here. When you look at that, what do you conclude from that as being the Saudi strategy? Why do you think that they targeted food production and distribution so intensely?

MARTHA MUNDY: If you feed people you control them, in a sense. And Yemen was very dependent on imports, but also Yemen remained a very rural country. I think that the statistics that we have about the importance of agriculture in the rural areas underestimated, and so often they do, because it’s been put in money value, if you see what I mean; i.e, what would the things be worth if they went in the market.

I think that there- after all, you have to remember that in Gaza quite regularly the Israeli attack farmers and fishermen. This is part of a certain revenge strategy, but also a strategy that is supposed to soften up people. It generally doesn’t. It doesn’t even in Gaza. And it hasn’t in Yemen. But I think it’s very important not just to focus on the bombing. When that didn’t bear fruit, then from the autumn of 2016 the central bank was moved out of Sana’a, although it had been paying employees right across the country successfully. And since that time, government employees- from the health workers to the teachers to the people in ministries of culture, they haven’t been paid. And that, that kicked off a major economic impoverishment of people across the country.

So I think one has to look at this war in various stages. I mean, I can go into a more theoretical statement about the hostility of capital and the Gulf-based oil states to traditional artisanal fishing, and the sovereignty of Yemen over its own agrarian production, peasant agriculture. I can do that theoretically. But I think that in a sense that’s not our issue today. Our issue today is also the cover that the Western governments have given to this economic war.

And let us remember what was done in Iraq. And in Iraq they were- over the sanctions regime. You could read the great book by Joy Gordon called Invisible War on Iraq’s sanctions regime. But in the case of Iraq there was some- there was some limits put on that through the very contested U.N. committees that oversaw that. I also want to say that the Western powers clearly have given protection to Saudis to do double, double controls on all- to close the airports, which is of course a crime itself, because people in need of medical treatment cannot leave Yemen, to close Sana’a airport. But also to have from the very beginning of the war delay, seizure of boats to search them. And it can be remembered that 18 months into the war, finally, the UN set up what’s called the UN verification inspection mechanism. They have an inspection mechanism of all boats going into Yemen. And that to date has not found a single harm on those boats.

But even so, the power is on the UN Security Council, led by the U.S. and UK and France. They do not raise their voice about the enormous delays, seizures, even of things like once or twice the World Food Program boat, by the Saudis. And that is also clearly part of their protection or complicity in this very, very damaging economic war.

AARON MATE: We will leave it there. The report is called Strategies of the Coalition and the Yemen War. It’s available via the World Peace Foundation, and we’ll link to it on the segment page at The RealNews.com My guest has been Dr. Martha Mundy, professor emeritus at London School of Economics. Thanks very much.