As Campaign to End US-Saudi War on Yemen Grows, Republicans Derail it with Bizarre Wolves Bill

A House bill that would end the catastrophic US-Saudi war on Yemen is gaining support, but Republicans bizarrely blocked a vote using unrelated legislation on gray wolves and the endangered species list

A House bill that would end the catastrophic US-Saudi war on Yemen is gaining support, but Republicans bizarrely blocked a vote using unrelated legislation on gray wolves and the endangered species list 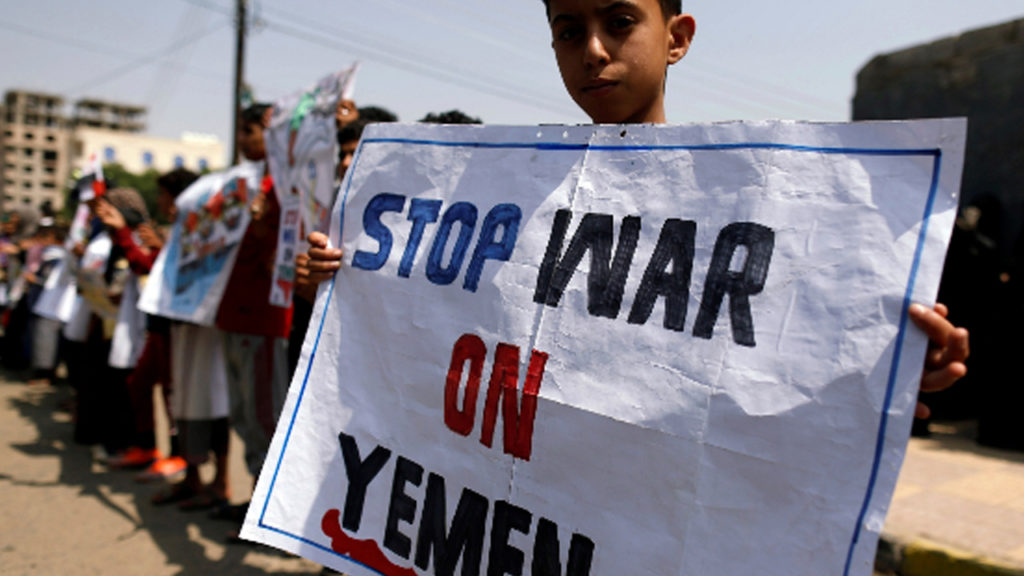 BEN NORTON: The campaign is growing to end U.S. support for the Saudi war on Yemen, which has unleashed the largest humanitarian catastrophe on the planet and pushed millions to the brink of famine. But Republican members of Congress have resorted to bizarre tactics to try to maintain U.S. support for this devastating war and derail any attempts to stop it. A Yemeni child dies every 10 minutes on average due to the crisis caused by the war, and specifically due to Saudi Arabia using famine as a weapon–intentionally destroying food production and preventing imports into the poorest country in the Middle East.

The U.S. government has played the key role in helping Saudi Arabia carry out this war, providing substantial military, economic, and political assistance. In response, some lawmakers in Congress have been taking action to try to force the U.S. military to withdraw its support, which would effectively end the war. In the House of Representatives, Congressman Ro Khanna, a progressive Democrat from California, has been building support for a bill that cites the 1973 law the War Powers Resolution, which puts a check on the power of the president and gives Congress the authority to vote for or against a U.S. war. This bill has some bipartisan support, although it is mostly backed by progressive Democrats, and Republicans have been taking steps to try to undermine this legislation.

On Wednesday, November 14, House Republicans employed one of the strangest tactics imaginable. They used a totally unrelated bill involving wolves and the endangered species list in order to block a vote on the Yemen bill. Republicans have been trying to pass the Manage Our Wolves Act; legislation that would remove the gray wolf from the list of threatened or endangered species and end the U.S. government federal protection for gray wolves, allowing Americans to hunt and kill the animal.

So Republicans in the House introduced a one line rule change into the Manage Our Wolves Act that is about a totally unrelated bill, the Yemen War Bill. This line removed the privilege that the Yemen War Bill had, which means House Republicans could prevent a vote on the Yemen Bill. And that is exactly what they did.

Before the vote, Wisconsin Representative Mark Pocan, the co-chair of the Congressional Progressive Caucus, condemned this strange Republican strategy to block the vote, and called on Congress to exercise its constitutional responsibility over war.

MARK POCAN: Congress’s sole responsibility over offensive use of force is outlined in Article 1, Section 8 of the Constitution. Congress shall have power to declare war. Yet today, House Republicans are attempting to avoid their responsibilities by sneaking unrelated language into this rule, which will prohibit consideration of a War Powers Resolution pertaining to the U.S.-Saudi war in Yemen. To be clear, they took a bill about removing gray wolves from the endangered species list in North America and included a provision prohibiting even just the discussion of war in Yemen.

This is a wolf in sheep’s clothing. This is the deprivileging of House Resolution 138, which is- this is just another abdication of our responsibilities as members of Congress. We are literally elected to make decisions about war and peace, and we are failing to do the most basic function of our job, to uphold the Constitution.

Yemen is the worst humanitarian crisis on the planet, with the UN saying that 14 million people, half the population of Yemen, are either experiencing full-blown famine, at the risk of death by starvation as soon as the end of the year. Since 2015, U.S. forces have been backing the Saudi war by assisting in targeting logistical support and refueling deadly Saudi airstrikes in a war that has nothing to do with fighting al Qaeda. We can end active U.S. participation in a Saudi-led conflict in which the Saudis are imposing a blockade to literally starve millions of Yemenis to death. If the U.S. ends its involvement, Saudi leader Mohammed bin Salman will be forced to the negotiating table to end his brutal bombing campaign and blockade of the food.

BEN NORTON: The House voted to pass this new rule change 201-187. Almost all of the votes in support of it were Republicans. Nearly all who opposed it were Democrats. Fifteen Republicans sided with the Democrats against the rule change. On the other side, six Democrats sided with 195 Republicans to vote for it. Congressman Ro Khanna, the lead sponsor of the Yemen bill, condemned the rule change. And in a speech on the House floor, he said this form of suppression was unprecedented.

RO KHANNA: Let’s be very clear. This is unprecedented in American history. Never, never has the Speaker of the House and the majority denied a member of Congress a vote on matters of war and peace. This is basically rendering ineffectual the War Powers Act. The War Powers Act was passed in a bipartisan fashion after Vietnam, because our nation said never again are we going to make the mistake of Vietnam. We’re going to make sure that if a member of Congress calls for a vote, that members of Congress have the Article 1, Section 8 responsibility to vote on matters of war and peace. And what the majority is saying, that if the President of the United States and the Speaker believe we should be in war, we should be at war. It doesn’t matter what members of Congress think. That’s what they are doing with this role.

BEN NORTON: When asked why Democrats were not waiting to vote on the Yemen bill until January when they’ll have a majority in the House, Ro Khanna said Yemenis do not have time to spare.

RO KHANNA: Well, why not wait? Why not wait a few weeks until we’re in the majority? Every report has said that 500,000 children will die; 500,000 children will die in a matter of months. They don’t have aid. They don’t have nutrition. And let’s be very clear on what we’re doing. While we’re bombing the ports of Hodeidah we are not allowing food and aid to get to those kids. And when history is written they’re not going to say Jim McGovern did this, or Ro Khanna did this, or new House did this. They’re going to say, how did the Congress not allow a vote while hundreds of thousands of kids were not allowed food and medicine?

BEN NORTON: In the meantime, Saudi Arabia and the United Arab Emirates have accelerated their war on Yemen, and U.S.-backed Saudi airstrikes continue to kill Yemenis in buses, vegetable markets, and other civilian areas. Likewise, U.S. arms sales and military support to Saudi Arabia continue.

If the war is not brought to an end, the United Nations has warned that more than 12 million Yemenis could starve to death in the world’s worst famine in 100 years. Hawaii Congresswoman Tulsi Gabbard stressed that this U.S.-backed war is genocidal.