As Brexit Throws UK Gov’t in Turmoil, ‘We See Only the Shadows’ of What is Really Happening

Prof. John Weeks talks about what is behind the Brexit maneuvering that has led to Boris Johnson's and David Davis's resignations from Theresa May's cabinet and how this will affect the process by which the UK plans to leave the European Union

Prof. John Weeks talks about what is behind the Brexit maneuvering that has led to Boris Johnson's and David Davis's resignations from Theresa May's cabinet and how this will affect the process by which the UK plans to leave the European Union 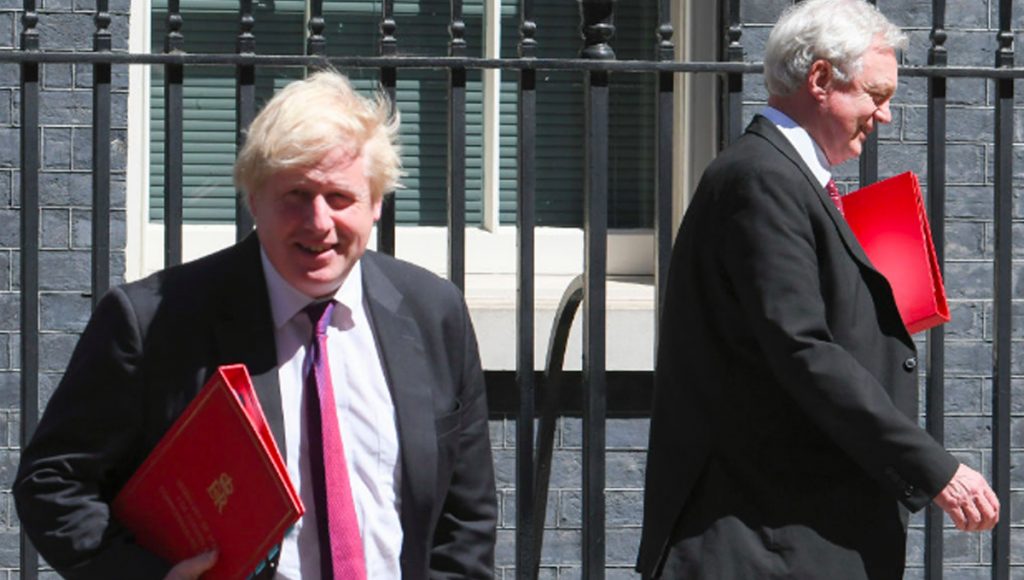 The government of Britain’s Prime Minister Theresa May is in turmoil following the resignation of two key cabinet members; one Brexit Secretary David Davis on Sunday, and then Foreign Secretary Boris Johnson on Monday. Both said that they resigned because they could not support the path towards Brexit that Prime Minister Theresa May is pursuing. Negotiations between Britain and the EU for the modality under which Britain would leave the EU are still highly uncertain after nearly a year of negotiations. Theresa May and opposition, and Labour leader Jeremy Corbyn addressed parliament on Monday regarding the issues. Let’s listen.

THERESA MAY: In the two years since the referendum we have had a spirited national debate, with robust views echoing around the Cabinet table as they have on breakfast tables up and down the country. Over that time I’ve listened to every possible idea and every possible version of Brexit. Mr. Speaker, this is the right Brexit: leaving the European Union on the 29th of March, 2019.

JEREMY CORBYN: We have a crisis in government. Two secretaries of state have resigned. And still we’re no clearer on what future relationship with our nearest neighbours and biggest partners will look like. Workers and businesses deserve better than this. This government is not capable of securing a deal to protect the economy, jobs, and living standards. It is clear this government cannot secure a good deal for Britain.

SHARMINI PERIES: Joining me now from London to help us understand, make sense of what’s going on, is John Weeks. John is Professor Emeritus of the University of London School of Oriental and African Studies, and the author of the book “Economics of the 1 Percent: How Mainstream Economics Serves the Rich, Obscures Reality, and Distorts Policy.” Good to have you back, John.

JOHN WEEKS: Thank you very much for having me.

SHARMINI PERIES: All right, John. Let’s start off with a brief summary of what’s actually going on with these resignations.

JOHN WEEKS: Well, I think that there are a lot-. There are many, many layers of this that’s going on, and everything is not as it appears. What I would like to do is to cut to the basic aspects of this, and then come back to what the resignations mean. The two biggest economic forces involved in the Brexit issue are, one, Britain’s financial interests, financial capital in Britain, sometimes called the City of London. They’re very powerful. They’re very powerful in the Conservative Party. And on the continent, German industrialists. Germany has a huge trade surplus with Britain, and its industrialists want a deal that does not threaten that huge trade surplus. The British Financial Council wants a deal that does not threaten their ability to operate freely in Europe. I must say that the Brexit negotiations cover only goods. They don’t cover services, which the financial sector has. But a separate deal will be made.

So what I think is going on is that Theresa May is responding to the largest donors and the most powerful supporters of her party, British financial capital. And they have said, we want an arrangement where we can operate on the continent. And the other part of it is we give the Germans free trade with Britain. And that’s the deal you’re supposed to cut.

Theresa May then went to her Cabinet. For a long time she tried to play both sides, because her party is very split. And said, this is the deal we have to do. Here it is. And it’s pretty much what I just said, whatever you want to call it. And that means that the people, those members of the cabinet that wanted a complete break with the European Union- and there are few of them, for reasons I’ll go into in a minute- they resigned. David Davis, he was the Brexit negotiator, and his position was that there should be a complete break with the European Union. And the other person was Foreign Secretary Boris Johnson, who is a complete political opportunist. I think he probably resigned, though he said he resigned because he just wants a break with the European Union. He probably resigned because he thinks that this is a chance to become prime minister and replace Theresa May.

So that’s, you might say, what it’s basically about. Behind the scenes the big guys are deciding what’s going on while we mere mortals are watching, you might say, the shadows on the cave, where each sort of puppet is playing his or her part, and there seems to be an argument about, you know, hard Brexit/soft Brexit. But in fact what has happened is Theresa May is attempting to implement a policy which is consistent with Britain’s most powerful economic interests.

SHARMINI PERIES: All right, John, so what does this mean for May’s government in terms of her ability to govern?

JOHN WEEKS: Well, I think that that is the crucial point. If there were a rebellion by her own MPs- and I’ll come back to how many there would have to be, and so on- if there were a successful rebellion that threw her out, then it is possible, in fact it would be the only route, to Britain not leaving the European Union, because that could lead to an election. The Labour Party might win the election. And though the Labour Party leadership has been ambiguous on the position that it would take with regard to the European Union, once it was in power it might well take steps to reverse Brexit. It wouldn’t be hard to do.

OK. Now I’ll make a prediction. I very much hope that happens. I doubt that it will. And the reason I doubt that it will is because while Theresa May has a very small majority, and it is only a majority because she has 10 members of the most right-wing party in the British Isles, the Democratic Unionist Party from Northern Ireland, she has them as an ally, she has those 10 members of parliament. They are the only reason she stays in power. Nonetheless, with the numerical count, probably about 15-20 Conservative MPs would need to vote against her to bring her government down. And that is because there are some members of the Labour Party who would vote who are very anti-EU. They tend to be the left, some of the left-wing members. They’re not just left-wing members. They would vote, they might vote with the government, or abstain.

So expecting a large number, substantial number of Tory MPs to vote against their government, that would mean two things. One, there could be an election in which they lose their jobs. But much more serious, I think, even for the most opportunist, much more serious is if Jeremy Corbyn and the Labour Party were to come to power. If the Labour Party came to power with Jeremy Corbyn as leader and John McDonnell as chancellor of the exchequer, it would be the end of neoliberalism. We’ve had 40 years of neo liberalism started by Margaret Thatcher, carried on by Tony Blair and the Labour Party. And if Jeremy Corbyn comes in, that will be over. It won’t be over overnight, but pretty quick it’ll be over. And a lot of companies and a lot of people who have made a lot of money would lose out. I think that when the Tory rebels, whether they are pro-EU rebels or anti-EU rebels, when they come to cast a vote, the effect of which might be to bring the government down, I think they’d pause and say a Labour government could be even worse.

So I think it’s possible that Theresa May’s government would fall. I think it unlikely. I regret to say I think her government will continue, and continue long enough to leave the European Union.

SHARMINI PERIES: Now, there has been a lot of talk, John, about the possibility of a second referendum on Brexit. Now, is this a concrete proposal that anyone is considering? And is Labour supporting such a move?

JOHN WEEKS: I think that it is concrete. There are several groups that are pushing for that. One of the best MPs in parliament, the only Green MP, Caroline Lucas support a second referendum. I think that it is extremely unlikely. If it had been a week ago, I would have said in a more longwinded way what I’m now saying very briefly. The timing would be very, very tight. It must be passed before the 29th of March next year. Any referendum after the 29th of March would be, in effect, a reentry referendum, which would involve a very long process. Before the 29th of March it can just be a cancel Brexit referendum. You would have to have at least a month of campaigning, so we’re back to the middle of February. Parliament goes into recess in a few days, and they don’t come back till early October. So you can see it’s, it’s very tight.

Then there’s the complication of who would write the thing, and the sort of-. Every country’s legislature has its own special arrangement, and like the United States, funding bills begin in the House. Well, in Britain any bill has to be introduced by the government, except on the rare occasion, so on and and so forth. So I used to-. Before what happened over the weekend and today, before that I thought it was unlikely. But now I think it’s unlikely because Theresa May will take, is likely- don’t want to exaggerate- is likely to take Britain out of the European Union by the end of this year.

JOHN WEEKS: And the only reason she wouldn’t is because her government falls. And then we won’t need a second referendum.

SHARMINI PERIES: All right. All right, John, I thank you so much for joining us for now, and I’m sure we’re going to be back to you soon on this topic.

JOHN WEEKS: Thank you very much.