As COP24 comes to a close, Greenpeace's Cassady Craighill says advocates are pushing world leaders to do more than Paris Climate Accord demands—and to listen to frontline communities

As COP24 comes to a close, Greenpeace's Cassady Craighill says advocates are pushing world leaders to do more than Paris Climate Accord demands—and to listen to frontline communities 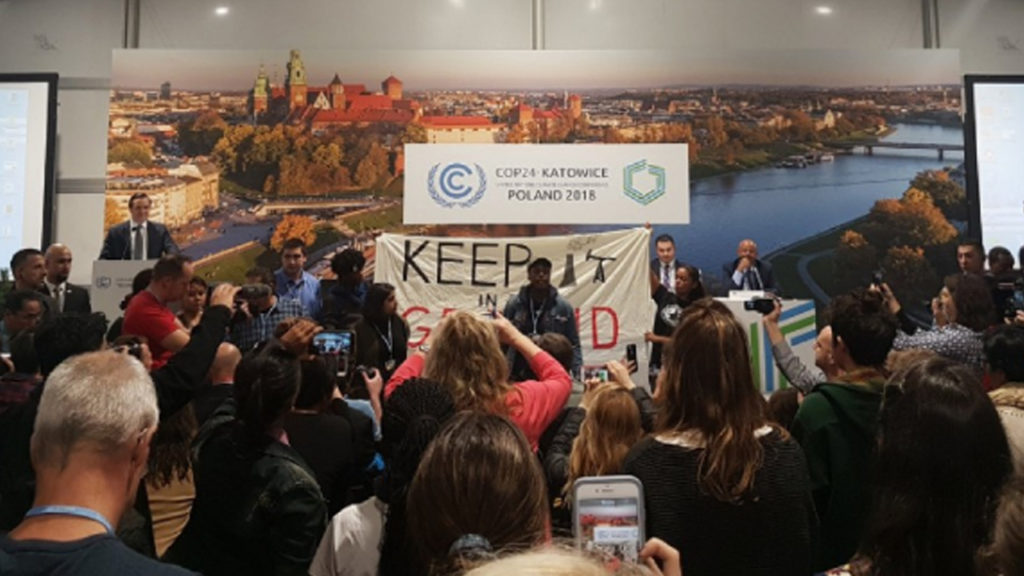 The UN climate talks, or COP24, are coming to a close in Katowice, Poland. Leaders gathered at COP24 to discuss how to comply with the 2015 Paris climate accord, the international non-binding agreement to keep warming below 2 degrees Celsius over pre-industrial levels. President Trump, of course, pulled the U.S. out of the Paris climate accord last year, to extreme outrage. But scientists, including scientists from the Intergovernmental Panel on Climate Change, or the IPCC, which is the world’s leading body on climate change, have questioned whether or not the goals of the Paris accord are really enough, and hundreds have held demonstrations at COP24 over the past two weeks to demand bolder action from its participants.

Now joining me to talk about all this is Cassady [Craighill]. She’s a senior communications specialist at Greenpeace. Thanks for being here today, Cassady. I wanted to start by asking you: COP24 has convened leaders from some 200 nations; almost 200 nations. And they’re again discussing how to comply with the Paris climate accord. But are the goals of the climate accord really enough? It aims to keep the globe below 2 degrees of warming, but we just saw a report a few months ago from the IPCC–a report of course that the U.S., Saudi Arabia, and Russia, and Kuwait downplayed at COP24, but nonetheless a report that shows that 1.5 degrees of warming would be devastating, and that we could hit that 1.5 degrees in just 12 years. With that in mind, are these goals enough?

CASSADY CRAIGHILL: Yes, and it’s a great question on whether or not the goals are enough. I think that the 2 degree mark set in Paris, we obviously know from the IPCC report that that was not enough. And organizations and scientists warned in Paris that the 2 degrees was not enough, and that we couldn’t exceed 1.5 degrees. And honestly, we are at 1 degree of warming, and we’re already witnessing the impacts of climate change. So the urgency could not be higher, and we need to be as ambitious as possible since we are already in a climate reality, and we’re already seeing the impacts of climate change. So there is no goal that is too ambitious to avoid climate catastrophe and to provide justice and recovery for the communities that are already seeing the impacts of superstorms, and fires, and endless droughts, and all of the extreme weather impacts that we’re seeing now on a daily basis.

DHARNA NOOR: Yeah, and again, as you said, many scientists have raised that the goals could have been stronger; that avoiding 2 degrees of warming or even 1.5 degrees of warming isn’t a safe degree. There’s still–there’s already been catastrophic effects. There’s been islands that have gone under due to climate change. But even if we do just adhere to those relatively modest goals set in the Paris climate accord, are they possible to reach anymore? Now that we’ve seen this new report from the IPCC, the new federal report that shows the devastating impact of climate change on the U.S. and the U.S.’s economy.

CASSADY CRAIGHILL: Yeah, right now we are not on track. And I say that being somebody in the United States. The United States is not on track to meet those goals. It is possible. And one great part about the IPCC report that sometimes gets overlooked is that there are reasons to hope. The IPCC report did say that we have 12 years to fix this. Which is, you know, a blink of an eye in the span of history. But that means we have to aggressively keep fossil fuels in the ground immediately, and advance renewable energy. So it is possible. But right now the lack of leadership that we’re seeing from the biggest emitters like the United States is definitely cause for concern, and it means that unfortunately the rest of the world and other political leaders in the United States have to make up for that lack of leadership. And that means that we have to do no new fossil fuel leases in the United States. So no new offshore drilling, no new pipelines, no new tar sands expansion. And all of that has to be non-negotiable if we’re going to meet any of those goals, and if we’re going to avoid absolute catastrophic climate change.

DHARNA NOOR: Yeah, and with, of course, the Trump administration pulling the U.S. out of the Paris climate accord I think many people are looking to local fights, state fights, and fights in the Senate and House of Representatives to sort of pick up this torch. Could you talk about some of the efforts there, and whether or not those pose any hope for the future of climate change?

CASSADY CRAIGHILL: Yeah. It’s actually–oddly feeling really hopeful in a lot of ways right now in the United States because of our new leaders in Congress. And the Green New Deal is totally blowing up right now, and people are really excited about it. That is a proposal set by new leaders in Congress who often ran on a platform of climate change, that the country needs a new deal of renewable energy jobs, of a just transition from those fossil fuel jobs, and a recovery for communities that are impacted. What it doesn’t include quite yet, and what Greenpeace is really pushing for as well as our partners, is that also should mean no new fossil fuel expansion. So like I was mentioning earlier, no big infrastructure like offshore drilling and pipelines.

So that Green New Deal is a beacon, definitely, of the leadership we need to see. But it also proposes some specific policy opportunities. And one by one we’re seeing new people in Congress sign up, Democrats mostly, of course, and support that new deal. Just a few minutes ago, I think maybe an hour ago, Cory Booker, who is a very popular politician from New Jersey, Senator Booker, he supports that Green New Deal, and is often talked about as a presidential candidate. So we’re going to continue to see that; should continue to push anybody who has who is in office now, but also has broader political ambitions, possibly for the White House in 2020. They have to include Green New Deal, ambitious climate goals, and no new fossil fuel expansion if they’re going to entertain running for president.

DHARNA NOOR: Yeah. I was there on Monday on Capitol Hill when the Sunrise Movement held a massive action with some 1000 young climate activists pushing for the Select Committee on a Green New Deal in Congress. And then, as you said, one of the biggest sort of refreshing things about that movement is the centering of frontline communities and the centering of not just climate justice, but also economic justice paired with climate justice. Have you seen any of that in the negotiations at COP24?

So the week kicked off with a really exciting moment when frontline and Indigenous community leaders interrupted the pro-fossil fuel event that the United States actually sponsored at the COP. And that was really exciting, to see those activists and those people who are already feeling the brunt of climate change, even though they are the least responsible, seeing them really speak truth to power and interrupt that event, and and take back that moment. So that was really strong and powerful and a great way to kick off this second week of the COP negotiations.

We’ve also seen a lot of leaders from the most impacted countries and activists from those countries speak up. So I personally have seen from the Philippines activists who have spoken up about their family being impacted by climate change. And we need to keep lifting those voices up, and not talking about climate change as if it’s in the future, which is often what happens at these negotiations, and instead talk about it as a crisis that we’re already facing.

DHARNA NOOR: All right. Cassady, thanks so much for joining us today. We hope to talk to you again as we see how these negotiations play out, so keep us posted.

CASSADY CRAIGHILL: OK. Thanks so much for having me.