Are Palestinians Living under a Double Occupation? (1/2)

Legislator Mustafa Barghouti discusses President Abbas’s dissolution of the Legislative Council, the attempt to alter the Paris Accords, and explores Palestinians' life under double occupation. With Israeli elections approaching, the Palestinian leadership does not challenge Israeli political parties to take a position on the occupation

Legislator Mustafa Barghouti discusses President Abbas’s dissolution of the Legislative Council, the attempt to alter the Paris Accords, and explores Palestinians' life under double occupation. With Israeli elections approaching, the Palestinian leadership does not challenge Israeli political parties to take a position on the occupation

Are Palestinians Living under a Double Occupation? 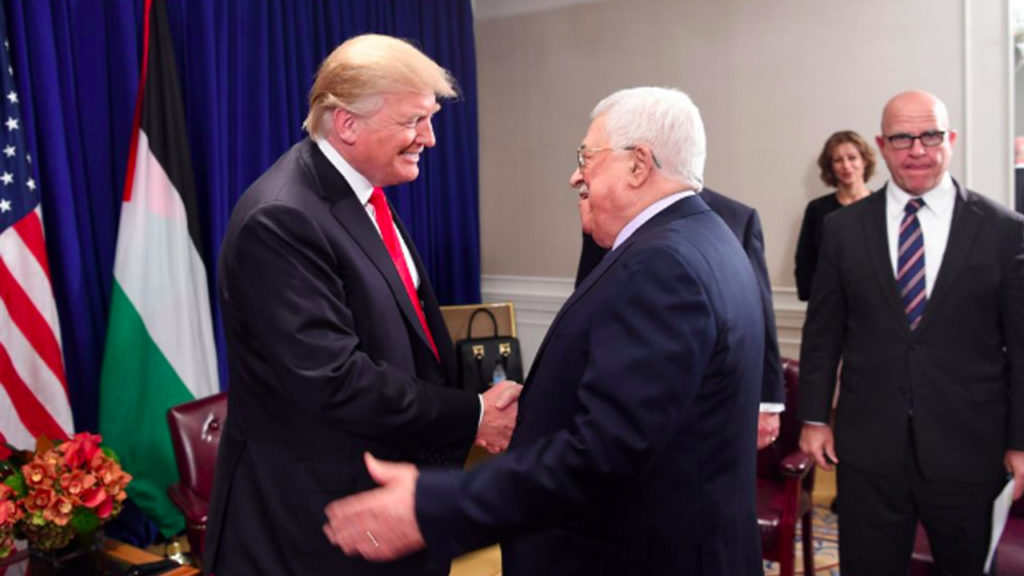 MARC STEINER: Welcome to The Real News Network. I’m Marc Steiner. It’s great to have you all with us.

While the American media has been focused on the upcoming Israeli election, it has all but ignored news from the Palestinian Authority and the complexity of politics within the occupied territories themselves. One of those issues going uncovered by much of the media in the West, especially in the United States, has been that the Palestinian President, Mahmoud Abbas, has made a series of executive decisions, and then acting on those policies at lightning speed with little input from the opposition. Among Abbas’s recent moves are further restrictions against the Hamas controlled Gaza Strip. Abbas then dissolved the Palestinian Parliament, the Palestinian Legislative Council as it’s known, in which Hamas has a majority. And then, on top of that, proceeded to dissolve the government as well.

Most recently, Abbas has called for change in the Paris Accords, which many people want, in which are the economic arrangement between Israel and the Palestine Authority, in part that has led to the domination of Israel over the Palestinian lands. Now, Ayed Yaghi is the President of the Palestinian National Initiative Party, and criticized the forming of the new government. Let’s hear what he had to say.

MARC STEINER: And here to join is the founder of the National Initiative Party, Mustafa Barghouti, which was founded in 2002. Mustafa is a member of the Palestinian Legislative Council and a former Minister of Information in the Unity Government of 2007. And Mustafa, welcome. It’s good to have you with us.

MUSTAFA BARGHOUTI: Thank you, good to be with you.

MARC STEINER: So there’s so much to cover here. Let’s see what we can get done. Let’s begin with the idea that ending the Paris Accords or trying to rethink the Paris Accords. I mean, for our listeners, these are the accords that gave the Israelis authority over customs, imports, exports, the entire Israel-Palestine area, and has kind of bankrupted the Palestinian Authority and the Palestinians in many ways. So what about this move on Abbas’s part, and how do you fit into that?

MUSTAFA BARGHOUTI: Well, we do support changing the Paris Accords, and actually changing the whole Oslo Agreement, which is unjust, unfair, and was never implemented by Israel. And at this moment, it’s not respected at all by the Israeli side, it’s kind of restrictions imposed only on the Palestinian side. When it comes to Paris Agreement, it restricted the Palestinian economy, it put us, as you said, under full Israeli domination. It allowed Israel to control seventy percent of our tax revenue, which Palestinian people pay from their own pockets. And Israel does not only charge us three percent for transferring our taxes, but also it controls them and uses them as an instrument of political pressure. There were times when all the seventy percent of our tax revenue was withheld by Israel for years.

There were times when Israel cut certain amounts from this revenue and used it in the way it likes, claiming it is payments from the Palestinian side. But most important, there are certain controls that prevent our economy from developing, like very high value added tax for our economy, which is imposed by Israel, like the control of our import-export, and most important, control of the land, where the Palestinian Authority is not allowed to function in more than thirty-eight percent of what should be the Palestinian future state.

MARC STEINER: So that’s the complexity. So while there’s kind of a breadth of support maybe for going against the Paris Accords, whether from your party or from Hamas or from the Fatah, that this might be a union in a sense, but I’m curious where the differences lie within how this was handled by Abbas. And what do you think the next steps should be, as opposed to what maybe Abbas’s next steps would be?

MUSTAFA BARGHOUTI: You know, I ran against Mr. Abbas in 2005.

MARC STEINER: You did.

MUSTAFA BARGHOUTI: We proposed a completely different policy. I was the runner-up in these elections. And we believe that the Palestinian policy should be more determined, more clear, and more unifying for the Palestinian people. We, for instance, think that the dissolution of the Palestinian Legislative Council, which is the only elected body democratically, was wrong. And what we wanted is new elections, and after that comes the old council, would go away. But you can’t dissolve the only elected body without having elections first. We didn’t have elections since 2006, as you know, neither presidential not legislative. This is a major weakness. There is an internal division that is not solved yet, and we believe that the measures that are taken by the Palestinian Authority against the people of Gaza Strip–and I assure you, these are measures not against Hamas but against the people of Gaza, are not acceptable and should be stopped immediately.

The most important thing is that even decisions that were made by the Central Council of the PLO, and the General Assembly of the PLO, were not implemented, including the decision to stop security coordination with Israel because it is used only for the sake of the Israeli side while the Israeli army keeps insulting the Palestinian Authority and entering the areas that it controls. And there was also a decision to revise and change all the existing agreements that Israel has violated. But none of that was really implemented so far.

MARC STEINER: So two quick questions here about that. So some people might argue that it’s almost impossible to hold another election now, when Palestinians can’t even move from one area to the next. And the other part of that is why did Abbas do this, and has he in a sense–I don’t know how else to put this–made himself into a dictator, or wants to make himself into some dictator or authoritarian figure in the Palestinian world?

MUSTAFA BARGHOUTI: It’s really hard to speak about a dictator when the government, the Authority, like the whole population of Palestine, is under Israeli occupation.

MUSTAFA BARGHOUTI: So actually, the Authority is under occupation. And Gaza is still under occupation, only a different form of occupation. That’s why we say that this fight between Hamas and Fatah is meaningless, because they’re fighting over an Authority while this authority is completely occupied. And we are all occupied. And our approach would be to form immediately a unified national leadership within the ranks of the PLO, of course, and form immediately a National Unity Government.

MUSTAFA BARGHOUTI: Including Hamas, yes of course. And by the way, Hamas is ready to enter that government without nominating its members. I mean, they are ready to nominate some friends of them without being members of Hamas. And they would accept a National Unity Government as a unifying body, given that it would be created in consultation with all Palestinian groups that are democratically elected. And I believe such a solution would enable us to have elections, because it would guarantee that all Palestinians will participate in these elections, whether they live in Gaza or in the West Bank, including East Jerusalem. So this is the formula. The measures that are taken by the PA are dividing us more and more. And that, of course, pleases only one side, which is the Israeli occupation.

MARC STEINER: So how do you think the elections in Israel itself will affect the lives of the four and a half million Palestinians who are under occupation? I mean, will this have any effect at all on the government in Ramallah? I mean, it resigned. I’m just curious what you think where this may take it all.

MUSTAFA BARGHOUTI: The proposal from Mr. Abbas is to form a PLO government, but five major groups in the PLO, the five effective groups in the PLO, which are the Palestinian National Initiative, the PFLP, the DFLP, the FIDA, and probably the People’s Party, have decided not to join a faction PLO or government, but insist on a national unity government. So that’s why now there is an obstacle to forming the factional government. On the other hand, the Israeli elections, of course, will have an impact. And unfortunately, we do not expect anything good from these elections, mainly because the competition now in Israel is between the extreme right and the very extreme right.

And in my opinion, because the Israeli public, the population, feels that occupation is not costly at all, actually it’s profitable, they are turning their backs to peace. And they are moving more and more in supporting groups like Naftali Bennett and, of course, Benjamin Netanyahu and others, who say there is no place for a Palestinian state and who are really trying to kill the two state solution, and who passed a very dangerous and racist law in the Israeli Knesset, which is the National Jewish Law, which practically excludes the Palestinians from being a nation living in Palestine, including the one point five million Palestinians who hold Israeli citizenship.

So what we are struggling against here is not only a military occupation that has become the longest in modern history, we’re practically all subjected to a system of apartheid, a racial discriminatory system. And unfortunately, we do not see healthy signs up to now in the Israeli elections that would bring to power a party that would support real peace and immediate peace.

MARC STEINER: We’re talking with Mustafa Barghouti, who is one of the founders of the National Initiative, a member of the Palestinian Parliament, a physician and activist in Palestine. We’re going to continue our conversation with Mustafa for a few minutes here, looking at his meeting with the Russian Envoy, as well as what could be the next steps in the resistance. So stay with that one. I’m Marc Steiner, here for The Real News Network.

Mustafa Barghouti was born in Jerusalem, 1954. He is a leader of the Palestinian National Initiative, founded in 2002 and a member of Palestinian Legislative Council, former Minister of Information, unity government, March-June 2007.

A wildcat strike in 1970 solved the last crisis at USPS