To achieve its goals and defeat the Houthi rebels, Saudi Arabia is pushing Yemen into what the UN warns could be the worst famine in decades. We speak to scholar Asher Orkaby of Harvard University

To achieve its goals and defeat the Houthi rebels, Saudi Arabia is pushing Yemen into what the UN warns could be the worst famine in decades. We speak to scholar Asher Orkaby of Harvard University 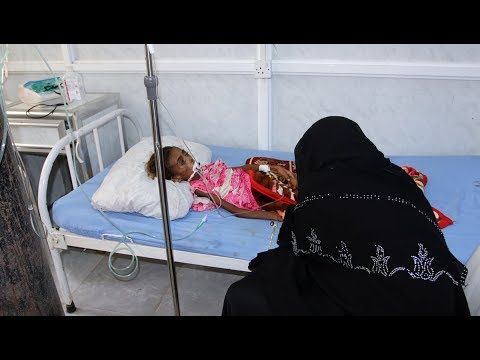 AARON MATÉ: It’s The Real News. I’m Aaron Maté. Yemen is already facing the world’s worst cholera crisis and now seven million people are on the brink of famine. Yemen’s crisis intensified last week when the Saudi-led coalition closed all of Yemen’s ports and stopped all humanitarian flights in response to a Houthi missile attack fired towards the Saudi capital of Riyadh. At the UN, Humanitarian Chief Mark Lowcock said the famine in Yemen could be the worst in decades.

ASHER ORKABY: Yemen’s been on the brink of crisis, not just for the past two years or in the conflict, but for many years before then, with shortages of food, water, supplies, certainly medical care, and it’s gotten much worse as Saudi Arabia has put a, in essence, a siege on the country, trying to force the population to give up their allegiance, or to pressure the Houthi tribesman in the North to give up their war against the Yemeni government. But it’s really just turned into one of the greatest crises in the region, with hundreds of thousands of cholera victims, widespread famine, and exacerbated what was just a small conflict, or small humanitarian crisis into one significantly larger.

AARON MATÉ: How has it worsened in just the past week? You had the Houthis firing a couple of missiles towards Riyadh. They were intercepted and destroyed, but in response, Saudi then intensifying its blockade, which already was very harsh.

Really, the Saudi response which as of today looks like they need to mitigate the siege and maybe allowing some more humanitarian aid in, but it’s really a political response. The Saudis seemed to be geared up for some political transition. Mohammad Bin Salman, the Crown Prince, knows something that no one else does, and has been putting pressure on Lebanon, pressure on Syria, and pressure on Yemen to try to get Saudi Arabia’s foreign policy cards in order before some kind of transition happens in Saudi Arabia.

AARON MATÉ: How would intensifying the blockade of Yemen strengthen Bin Salman’s position?

ASHER ORKABY: So, if you ask any Saudi official what keeps them awake at night, and they’ll say it’s not one thing, it’s 29 million things, which are called Yemenis. It’s been said, given the fact that the Saudis don’t care so much about the Houthis. They’re not concerned in reality that the Iranians are in Yemen, but they’re concerned for their Southern border. There’s a historic conflict between Saudi Arabia and Yemen, and there’s always been instability and concern for the Southern border.

So, Mohammed Bin Salman is thinking in terms of his Southern border. If he’s going to transition power, he needs to ensure that the Southern border with Yemen is secure, and whether in his mind that means worsening this humanitarian crisis, to pressure the Houthis to give up, if that’s in his mind, or many [inaudible 00:04:58] say this is Saudi Arabia’s attempt at genocide in Yemen, and sanctioned by the international community.

AARON MATÉ: This is their attempt at genocide?

ASHER ORKABY: So, it’s very difficult to see what Saudi Arabia’s doing, other than basically laying the entire country, 29 million, under siege, without actually giving any demands for what they want. The Houthis themselves, they’re Northern tribesman, they’re native to the country. Yes, they seized power from the government. The government had long lost legitimacy, and this continued bombing of sites in Yemen, Saudi Arabia’s in essence lost the direction of where this conflict is going.

They’re no longer supporting a leader that can come back into Yemen and reestablish the government, and has been bombing sites that according to most metrics, are violations of humanitarian law, and targeting specifically civilians rather than any military opponent. So, we don’t necessarily have to call this flat out genocide, but that’s what it’s turning into with the number of victims in Yemen, and the fact that the international community sanctioning this is really alarming.

AARON MATÉ: Right. So, let’s talk about the Houthis. They are the main combatant against the Saudi coalition. They’re allied with the former President Saleh. What position do they have when it comes to their role in this, to be able to reach some sort of settlement that could end this conflict?

ASHER ORKABY: So, to understand the Houthis, the Houthis themselves are just an individual family. Now, they were a family prior to 1962 when the modern Yemeni republic was established. The hierarchy within the country is basically a…hierarchy based around the… system. And…are those families who traced their lineage to the prophet Muhammad, and those…were the top of the social hierarchy.

When the republic was established in ’62, they fell down in their ranks, and were replaced by these new politicians within the Yemeni republic. So, these Houthis, the Houthi movement itself is supported by these same families who for decades have been dealing with political and economic and social marginalization. So, this movement is really a culmination of several decades of frustration within the Northern highlands of Yemen. So, there are a number of tribes who are coming together and reclaiming their role within Yemen’s political society.

It’s not clear from their demands where they’re going to go. Are they going to leave Yemen? They’re native to Yemen far more than the republican forces, so it’s not clear what the Saudis are demanding of the Houthis. Yes, they can withdraw from certain territories and can make concessions, but without giving them some kind of political gain within the system, then this compromise, and this war just won’t end with any feasible political consideration.

AARON MATÉ: What are the implications there for what an actual solution could be? You write in Foreign Affairs that any settlement has to take into account the different regional and sectarian makeup of the country.

ASHER ORKABY: So, Yemen was never a unified country. You’d have to go back thousands of years, over maybe 1500 years to the Rasulid dynasty. Even then, Yemen as we see today is not a single country. 1990 is the first time that the different factions within Yemen, or the different geographic regions within Yemen were united.

For simplicity’s purposes, there’s a Northern Yemen which was controlled, the old…community of Yemen. That’s primarily the tribes that are aligned with the Houthis. There’s the Southern Yemen which was a former British colony for 150 years, and then there’s an Eastern section of Yemen could…. That was a sparsely populated, mostly autonomous and…region. Those are the three natural regions within Yemen.

That would really speak to everyone’s concerns and would also split Yemen central authorities into three, also placating Saudi concerns for Yemeni Southern border and stability.

AARON MATÉ: Finally, let me ask you about the role of Washington, under both President Obama and Trump. The US has provided critical support to the Saudi-led attack on Yemen. There’s growing talk now, growing momentum in Washington, at least among some lawmakers, for a debate on the US role in the war. If the US role could be changed, what kind of pressure could the US bring on Saudi Arabia to influence their role and forge a peaceful solution?

That this war is about Saudi concerns for that Southern border. If the United States can, along with the United Nations and…, can establish a demilitarized zone along Yemen’s Northern border, Southern border of Saudi Arabia. That plan was used during the 1960s by the United Nations. It was used to great success and can be used today as well, to ensure, gives the Saudis some kind of face saving measure to allow them to withdraw those forces.

But giving Mohammed Bin Salman that assurance that the Yemenis or the Houthis movement won’t cross border, and perhaps destabilize the kingdom. So, if the Americans can do anything, it’s giving Saudi Arabia that insurance policy that someone will protect them from the Yemeni border incursion, and allows the Saudis with grace, to withdraw from the Yemeni conflict and allow the Yemenis to solve their own political crisis.

AARON MATÉ: But yet, the UN is warning right now that as we said, seven million people are on the brink of famine, so can MBS withstand calls like that from the UN, warnings that his policies are threatening to kill millions of people?

ASHER ORKABY: I’m not sure how concerned Mohammed Bin Salman is with the humanitarian crisis specifically. Yes, there is international pressure, but it hasn’t worked necessarily in the past. It may work today, some pressure forcing him to open the ports yet again to humanitarian efforts, but as soon as there’s an announcement that there’s an UN observer mission that’s going to take place in the next couple of weeks, to ensure or put a demilitarized zone between Yemen and Saudi Arabia, there would be no reason for Mohammed Bin Salman to not withdraw the bombing campaign, and allow UN observers to open Yemen’s border up to humanitarian aid.

As long as there’s an assurance for MBS that there won’t be any weapons transfers, which is his purported concern, then there would be no reason for Saudi Arabia to continue the conflict. As long as they know that that Southern border’s stable and secure, and Mohammad Bin Salman can worry about other domestic and foreign issues.

AARON MATÉ: When you say weapons transfers are his purported concern, is that an actual concern when he says that Iran is transferring high tech weaponry to the Houthis?

ASHER ORKABY: Saudi Arabia, in terms of countries intervening in Yemen, Saudi Arabia has intervened to a much greater depth than Iran over the past 20 or 30 years. Most recently during the 1994 civil war between North and South Yemen, Saudi Arabia shipped a great deal of weaponry over to the Southern Yemeni port of Aden. A lot of those missiles, great ironies of history, end up being launched at Saudi Arabia. The same missiles that the Saudis purchased for Yemeni separatists are now in the possession of the Yemeni army and President Saleh.

I think it’s a similar response as if they’re in the ’60s and ’70s. The Saudis come and said, “We’re concerned about communists on the Arabian Peninsula” and that was a word that everyone can understand. So, in many ways, the term has been touted by the Saudis, “We’ll worry about the Iranians” can be many ways conceived the same way that, “We’re about the communists. Now we’re worried about the Iranians.” Were the Iranians in Yemen? Probably not to the extent that the Saudis claim them to be, and the extent to which the [inaudible 00:15:36] events there, but certainly it’s exaggerated. The Iranians may have aided the Houthis in some ways, but for all intents and purposes, it’s a complete exaggeration the extent to which Iran can influence events in Yemen, and actually transfer weapons.

AARON MATÉ: We’ll leave it there. Asher Orkaby, research associate at the Harvard Davis Center, and a lecturer at Tufts University. His latest piece for Foreign Affairs is called “Yemen’s humanitarian nightmare.” Asher, thank you.