Senior Amazon engineer Tim Bray said the firings were evidence of "a vein of toxicity running through the company culture." We get a response from Chris Smalls, one of those fired workers.

Senior Amazon engineer Tim Bray said the firings were evidence of "a vein of toxicity running through the company culture." We get a response from Chris Smalls, one of those fired workers. 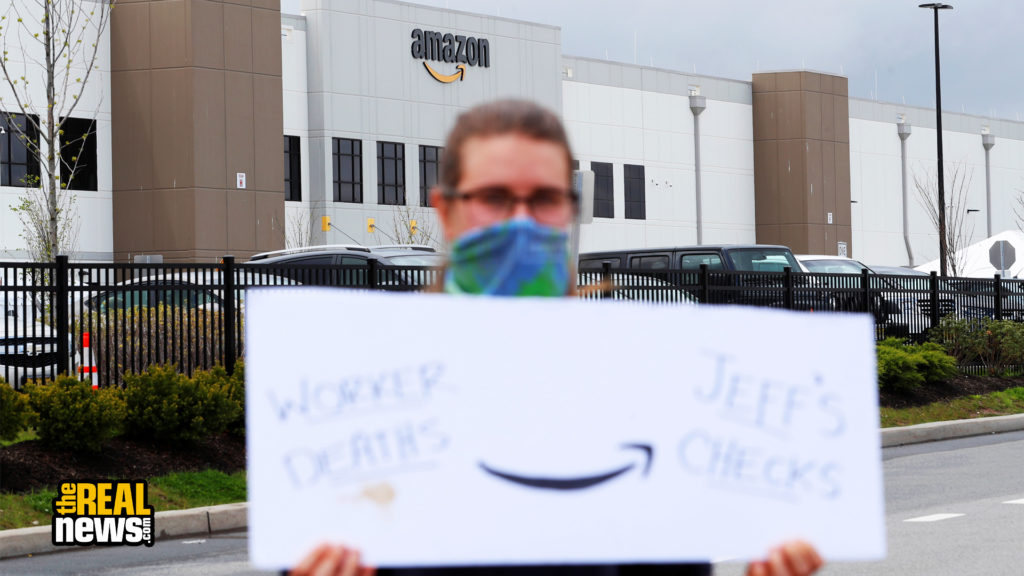 Shortly after recording, Amazon confirmed that a worker at the same facility Smalls was fired from had died from COVID-19.

Speaker 1: A senior vice president at Amazon has quit over the firing of workers. “I quit in dismay at Amazon firing whistleblowers who were making noise about employees frightened of COVID-19,” Tim Bray, a senior software engineer at Amazon, wrote in a blog post. Bray quit on May Day, a day of action, whose demands included boycotting Amazon over its handling of the pandemic. There are reported cases of COVID-19 in more than half of Amazon’s warehouses.

Speaker 2: We are protesting here at Jeff Bezos’s home because since the epidemic started, he has made $30 billion at a time where we’re seeing people losing their jobs.

Speaker 1: “Firing whistleblowers is evidence of a vein of toxicity running through the company culture. I choose neither to serve nor drink that poison,” Bray wrote. We spoke to one of those fired whistleblowers, Chris Smalls, to get his reaction.

Chris Smalls: And I was like, wow, this is amazing. And then I realized the nature, the stature of this guy’s position in the company being the VP, all the way at the top, making 2 million plus as a salary. I took that as a win for us, especially for what we orchestrated on Friday, May 1st, May Day, something unprecedented for the first time ever forming an alliance with all these other competitors, and companies, and industries. We took it as a small victory, but actually a major victory because, that validates the story that I’ve been telling along, what he did. It takes a lot of courage for him to do what he did, but I’m grateful for it. Hats off to him.

Speaker 4: That is one of the most powerful companies in the world, its owner Jeff Bezos. He’s the richest man in the history of the world. Talk a little bit more about what this means, because this means that this isn’t just insulated to frontline workers. Senior VPs are seeing what workers like you are doing and they are so concerned that they say they can no longer be associated with this company.

Chris Smalls: Yeah. It speaks volume when you speak truth to power, and you’re speaking the truth, which I was doing from day one, the power has a decision to make. They can continue lying to the public, something that Amazon does well, continue lying in the media, something that Amazon does well, or they can respond to their workers that are asking for the simple demands. Some people go one way, other people go another. Tim, what he did, was he chose to stand with the workers, with the front liners, even the techs that were terminated as well, and he did the right thing, as I did 30 days ago, 30 something days ago. And in March when I was raising concerns about health and safety, that affects everybody. That affects the communities that we live in, and in effects the families that we have at home, and I think he understood that.

Speaker 4: And Chris, the significance of him doing this on May Day, obviously it was a day of action. A lot of people were on the streets or in cars targeting, for example, the home of Jeff Bezos in New York City, the richest man in the world who’s fortune has increased by something like $20 billion just over the course of this last couple months,

Chris Smalls: Right. No, it’s blood money. He made a lot of blood money during this pandemic. That furthermore validates the fact that capitalism runs this country. This company hires and fire. Like I said before, to hire and fire during the middle of a pandemic is just unheard of. We only met the demands of Jeff Bezos’s pockets. We didn’t meet the demands of the employees or the consumers. The consumers are not asking for essential workers to potentially bring home, bring to their doorstep a package that could possibly have the virus on the package. The employees didn’t ask to work unprotected for an entire month of March.

The company wants to sugarcoat everything now, but it’s been too late. They started everything after they terminated me. My building, JFK, Staten Island was the pilot for all the things they’re doing now. So, for them to keep saying that they’re doing all of this and doing all of that and they’re spending all this money, good for them. But it’s a little bit too late. They should’ve done it already. They should’ve done it two months ago. They still need to pay all the employees that are unpaid right now. There’s been an employees that’s been unpaid for two months. So, they got a ways to go still. And like I said what Tim did yesterday, is going to resonate throughout the world, throughout the country that power, we are the power. The people are the power. And we took the power back on May 1st and that was a prime example of it.

Speaker 4: All right. Chris Smalls, all your work and for joining us again.

Speaker 4: For joining us at The Real News Network.