The United States has a history of not keeping its word. U.S. just withdrew from the Iran agreement, so why would the North Koreans believe the U.S. asks Tom Collina of the Ploughshares Fund

The United States has a history of not keeping its word. U.S. just withdrew from the Iran agreement, so why would the North Koreans believe the U.S. asks Tom Collina of the Ploughshares Fund 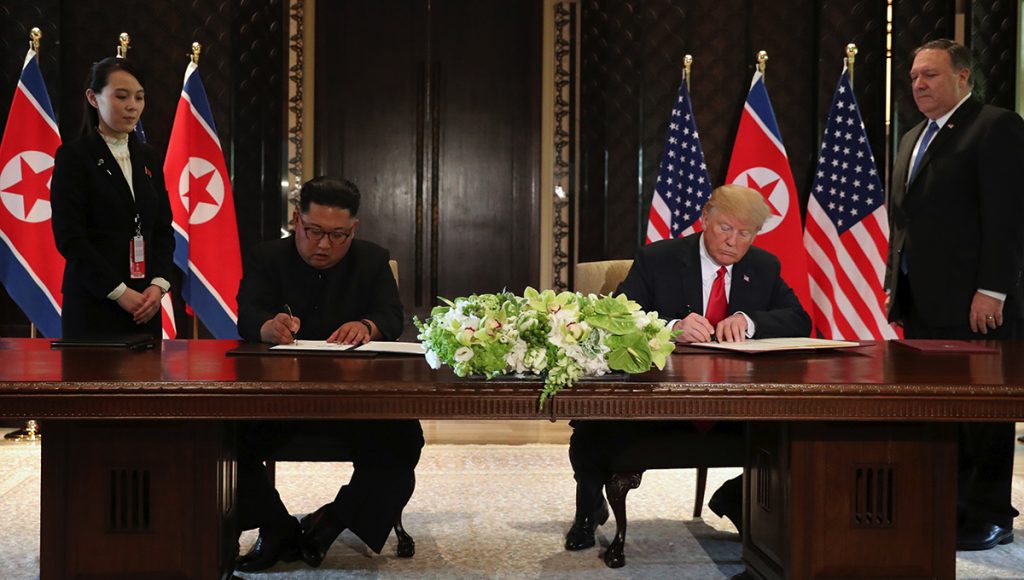 At their historic summit in Singapore, President Trump and North Korean leader Kim Jong-un signed an agreement that calls for an end to decades of U.S. North Korean confrontation.

KIM JONG-UN: We had a historic meeting and decided to leave the past behind, and we are about to sign a historic document. The world will see a major change. I’d like to express my gratitude to President Trump to make this meeting happen. Thank you.

AARON MATE: The U.S. says it will offer security guarantees, while North Korea says it will work towards, quote, complete denuclearization of the Korean peninsula. That falls short of a verifiable guarantee, but the two sides say it kicks off a negotiating process. As a part of it, President Trump told reporters that the U.S. will stop war games on the Korean Peninsula.

DONALD TRUMP: I want to get our soldiers out. I want to bring our soldiers back home. We have right now 32000 soldiers in South Korea, and I’d like to be able to bring them back home, but that’s not part of the equation right now. At some point I hope it will be, but not right now. We will be stopping the war games, which will save us a tremendous amount of money, unless and until we see that the future negotiation is not going along like it should. But we’ll be saving a tremendous amount of money. Plus I think it’s very provocative.

AARON MATE: Those comments from Trump mark a new step for the U.S., and may be a sign that these U.S.-North Korean negotiations could lead to real peace.

Well, joining me to assess that prospect is Tom Collina, director of policy at the Ploughshares Fund. Welcome, Tom. Let me start by asking you about what we just heard Trump say, talking about the war games as being provocative and that he will stop them. And also floating the possibility of a withdrawal of U.S. troops. What did you take from that comment?

TOM COLLINA: Well, the withdrawal, or the, theres the ending of the war games, I think, is very significant, because this is something that North Korea has has asked for. And it is something, frankly, I think we can give to encourage the talks to go forward. So I’m very supportive of the United States and South Korea suspending the war games as long as the talks are moving productively forward.

In terms of the troops, you know, I think that’s kind of a red herring issue. I don’t think the United States will pull its troops out for quite some time. I really think that’s an issue of if we do get a peace agreement, a peace treaty of some kind, that reduces the threat from North Korea, then you’d have to ask what’s the point of U.S. forces in South Korea if the military threat is much reduced? But that’s further down the road. I think the significant thing right now is that the United States has agreed to suspend the military exercises, and that should help the negotiations succeed.

AARON MATE: And let’s talk about the issue of what denuclearization means, because both sides say they’re committed to it, but they also have different definitions of what that entails. What is the gap between the U.S. and North Korean position on this issue, and do you think that it can be bridged?

TOM COLLINA: Sure. I mean, I think this summit was very long on photo ops, very short on details. So we didn’t really get a lot of answers to these very important questions, such as do the two sides agree on denuclearization. We don’t really know how wide the gap is because we don’t know where they both stand. And this summit did not answer that. Unfortunately, the summit statement says that both sides are committed to the complete denuclearization of the Korean Peninsula. That’s great. But we need further talks between the two sides to figure out what that really means, and it looks like we’ll be getting those talks very soon. The United States and North Korea will be meeting again next week, we’re told. So really this is the beginning of a, I think will be a long process but it’s a process that has to happen. Diplomacy is the only answer to this crisis, so it’s good that we’re getting on with it.

AARON MATE: In terms of what you think both sides will be looking for on the front about denuclearization, what will both the North Koreans and the U.S. be seeking to achieve there?

TOM COLLINA: The Trump administration wants denuclearization, or the elimination of North Korea’s nuclear weapons, to happen very quickly. And I think President Trump would like it to happen before the 2020 elections, whereas the North Koreans want it to take as long as possible. They’re not eager or anxious to get rid of their nuclear weapons. They want to get relief from economic sanctions and other things. They want a peace treaty. They want political recognition from the United States and other countries. They want to get their economy back on track.

So one way to compromise there is for the North to do some near-term deliverables So near-term down payments that don’t actually get you to the elimination of the North’s nuclear weapons, but gives us all confidence that they’re serious and gives Trump some real takeaways to show for himself before the next elections. So for example, the North has already suspended its missile testing and its nuclear testing. So they could take the next step and close all their nuclear test sites. They could close their missile testing sites. They can even hand over some amount of nuclear material to international inspectors. They could hand over some number of dismantled missiles to international inspectors. So there are things that the North can do that could be delivered in the next year or two that would give the United States and other nations confidence that this is moving ahead. So that will be one of the biggest issues, is the time frame, how long will all this take. But I think there are ways to sort of square the circle and meet both sides.

AARON MATE: And in terms of what the U.S. could do, let me go to Secretary of State Mike Pompeo speaking at the summit and what he said about what the U.S. is prepared to do to make this deal happen.

SPEAKER: Under the umbrella of security assurances, would that include removing U.S. forces now in South Korea. Is that something you’re prepared to discuss with the North Koreans directly?

MIKE POMPEO: I’m not going to get into any of the details of the discussions that we’ve had today. I can only say this. We are prepared to take what will be security assurances that are different, unique, than have been provided, that America has been willing to provide previously. We think this is both necessary and appropriate.

AARON MATE: That’s Secretary of State Mike Pompeo answering a question from a reporter in Singapore. So, Tom, when he says there that the U.S. is prepared to take steps that are unique and different from what U.S. presidents have offered before, what do you think he might be referring to?

TOM COLLINA: You know, it’s really hard to know, because that’s, that’s, you know, the million dollar question is how do we provide security assurances to the North so the North feels confident and secure about giving up its nuclear weapons? Because the the whole point of North Korea having nuclear weapons is to guarantee its security against invasion from the United States.

This is a really tough problem. And I think this is why denuclearization, one of the many reasons why it will take so long to get there. It’s not just a technical question of how do you dismantle the nuclear weapons and do inspections, but it’s a political question of how do you give enough confidence to the North that they feel they don’t need nuclear weapons anymore?

And I think that’s why this is going to take years and years of relationship building between the United States, China, South Korea, North Korea, Japan, to reduce distrust so that we wouldn’t consider attacking North Korea any more than we would consider attacking South Korea. We really have to just have a new fundamentally different relationship, and that’s going to take time. I really can’t imagine what Secretary Pompeo could offer the North that would change that dynamic.

Now, they want other things. They want economic incentives. They want political incentives. For example, opening embassies and things of that nature to try to normalize North Korea’s position in the world. They want an ending of the military exercises. I’m sure eventually they would want troop withdrawal. But none of that really gets to the question of how do you guarantee the North’s security. And I think the answer to that really is just time, and a fundamentally different relationship.

AARON MATE: And perhaps just a pledge, a binding pledge threatening not to, committing not to overthrow the government and to stop making the threats that we’ve seen from many U.S. administrations over, over previous years.

TOM COLLINA: Well, that would help, certainly. But I can’t believe the North would believe a promise by Trump, or any American president, not to attack. I mean, again, President Trump just went back on the U.S.-Iran agreement. So you can’t put too much stock in President Trump’s word. Other U.S. administrations have gone against previous agreements with North Korea. So there’s a long history here of the United States not keeping its word, as well as the North Koreans not keeping their word. And so it’s, again, it’s hard to believe that a piece of paper is going to be worth much to the North, but let’s find out.

AARON MATE: Right. And I’m sure that John Bolton, the National Security Adviser invoking the Libya model, which was widely interpreted to mean a country giving up its weapons and then having its leader overthrown and killed, did not help this process. It certainly did not help the prospects of this being resolved quickly, as opposed to taking many years. Tom, final thoughts?

TOM COLLINA: So, National Security Adviser John Bolton has been pushing the so-called Libya model. Clearly that did not end in a way that the North Koreans would be happy with, because Libyan leader Moammar Gaddhafi wind being killed after giving up his nuclear program, which really wasn’t comparable, the program itself, to the extent of what North Korea has. So the key concern for the North Koreans is what happens after they give up their nuclear weapons? Can they trust the United States not to attack them? And we’re just a long way from there.

AARON MATE: We’ll leave it there. Tom Collina, director of policy at the Ploughshares Fund, thanks very much.

TOM COLLINA: Pleasure to be here. Thank you.