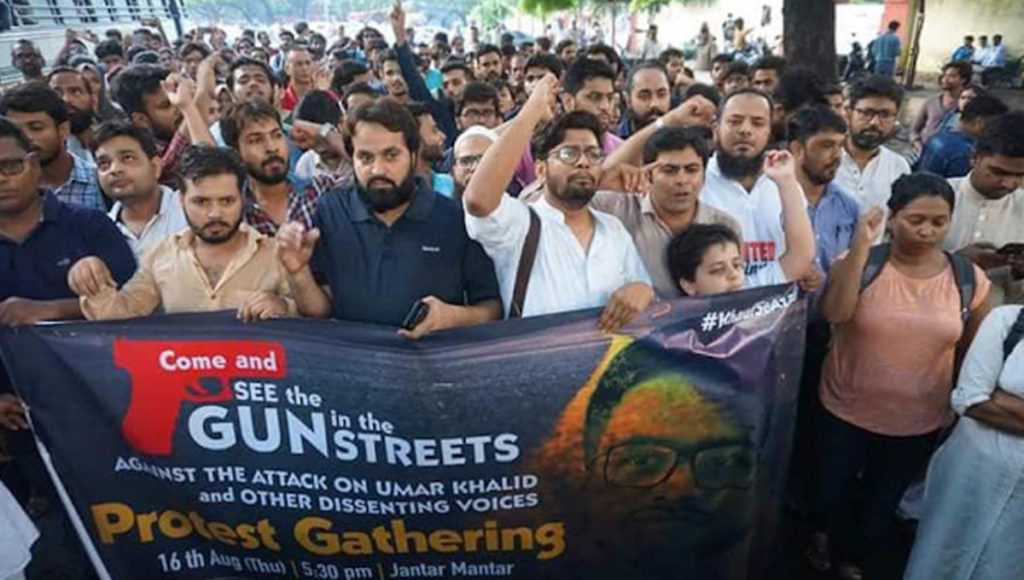 BEN NORTON: One of India’s most prominent student activist leaders was targeted in an assassination attempt, as far-right Hindu nationalist extremism is on the rise in the country. Umar Khalid, a leftist student organizer at the renowned Jawaharlal Nehru University, or JNU, was attacked and shot at outside India’s Constitution Club near the parliament in the capital New Delhi on August 13. Khalid, who has in the past been targeted by India’s far-right government for his activism, was attacked when he was speaking out against lynchings by Hindutva extremists. The event he was speaking at was held by the group United Against Hate.

After the attack, right-wing nationalists who identified themselves on social media as ‘cow protectors’ released a video calling Khalid a so-called traitor who is supposedly antinational. The alleged attackers called progressive JNU student activists ‘mad dogs’ that, quote: “should be done away with.”

The Real News spoke with Jayati Ghosh, who is a professor of economics at Khalid’s school Jawaharlal Nehru University. Professor Ghosh condemned the role of the university, the media, and the government in inciting sectarian violence like this.

JAYATI GHOSH: So we have an open assassination attempt on a young man in broad daylight in the centre of in the city in one of the most protected parts of the capital, two days before Independence Day, when security is at its peak. He’s attending a public meeting. There are policemen everywhere. A man has the gall to come up with a gun, and in the scuffle he’s not able to actually fire it. But he pushes it against his body. He loses control of the gun and he manages to shoot it in the air.

And nothing happens. The police in the first instance claim that nothing happened. There was no incident. He’s making it up. It’s only after CCTV cameras captured it and it’s shown to them that they admit that something may have happened. But they’re really not treating this seriously in terms of followup, even to the point where they’re harassing Umar, the victim, and making him come repeatedly to the police station to do various things and make various claims.

Not a single national leader of the ruling party or the government has bothered to condemn the incident. The vice chancellor of my university, who is actually a man out to destroy the university, has not bothered to condemn an attack on one of his students. There’s silence on this matter, and there’s really an attempt to suppress it. And it speaks volumes to the extent to which we now have media censorship of an unprecedented nature, that the media and news channels, the major newspapers, after an initial noise about it have really gone quiet on something as serious and significant as this.

BEN NORTON: After the attack, Umar Khalid pointed at the far-right BJP government and the media, accusing them of inciting violence against him with lies. He published a statement on Facebook, accompanied by a photo with the late journalist Gauri Lankesh, who was murdered by right-wing Hindutva extremists because of her journalistic work. They can’t scare us into silence, Khalid said. He added: The real culprits are those spokespersons of the ruling party, and the primetime anchors and TV channels who have spread canards about me, branded me antinational based on lies, and virtually incited a lynch mob against me.

Umar Khalid was one of three student leaders from the JNU Student Union who was arrested in 2016 and charged with sedition in what was widely condemned as a politically-motivated crackdown by India’s far-right ruling party on young left-wing political leaders. Professor Jayati Ghosh said the university administration itself has fueled this atmosphere of violent hatred by joining the state in targeting student activists.

JAYATI GHOSH: Well, in fact, the administration in the university has been beyond aggressive. They have actually, after the police cleared all the three who were falsely charged of shouting antinational slogans, the police cleared them of all wrongdoing, the university set up its own inquiry with its own chosen people and decided they were guilty, when there is absolutely no evidence that any of them shouted anything anti national. And in fact, none of them would. All Umar had done was organize a meeting about Kashmir. That’s all. And people came and spoke at that meeting. But he happens to be a Muslim, and therefore an easy target. He happens to be a radical. That’s an even easier target. So he’s well trained across the social media and television as a major national dentist. So his life is at threat.

And then there is a clear attempt on his life, because you have created that climate of hate and aggression and violence. Then you don’t bother to do anything about it. You treat it casually; it’s almost like, oh, too bad, it didn’t happen. Social media is full of really vindictive and horrifying statements about too bad. Others students of ours who have been targeted in this completely false way as well have been receiving- the women regularly receive rape threats. And these are scary, because they say we know where you live, we know where you go in the evening, we know who you meet, and we will get you. That’s the kind of oppression you have to face.

Umar was prevented by the university from actually submitting his Ph.D. He had to go to court. And the court had to force the university to allow him to submit his Ph.D. We got to that degree of vindictiveness and aggression on the part of the university administration towards its own students.

BEN NORTON: Since 2014, India has been ruled by the Bharatiya Janata Party, or BJP; a far-right party that supports an extreme form of Hindu nationalism called Hindutva. Professor Jayati Ghosh emphasized that India’s ruling party and its increasingly authoritarian Prime Minister Narendra Modi have instigated much of the communal violence targeting leftists and minority groups.

JAYATI GHOSH: There’s absolutely no doubt that all of this is being done with the tacit approval and encouragement of the BJP and the prime minister. The prime minister is a follower of people on Twitter who are known to incite violence, who are the ones making these death threats and rape threats and terrible, terrible trolling. And the BJP hires, we know, an army of 7,000 people whose job it is to troll anybody who dissents. So absolutely, this is happening with the tacit, and I would say in some cases the explicit support of the ruling party.