In Southern Brazil, the all women's carnival block Cores de Aide is marching for political resistance and in defense of women, who have been particularly under attack during the far-right presidency of Jair Bolsonaro.

In Southern Brazil, the all women's carnival block Cores de Aide is marching for political resistance and in defense of women, who have been particularly under attack during the far-right presidency of Jair Bolsonaro. 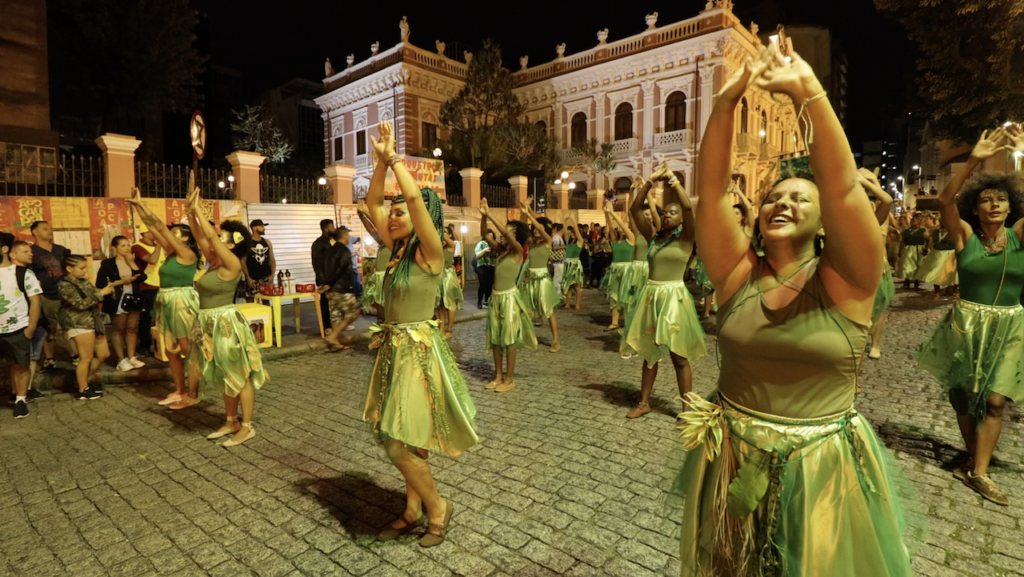 Brazil’s biggest celebration of the year.

This is the scene televised into most homes across the country and the world.

Massive floats and carnival blocks in the Samba stadiums of Sao Paulo and Rio de Janeiro.

But on the streets nearby, there’s another carnival.

Blocos Afro, or Afro group have been performing in Brazil since the 1970s.

They were born in Salvador, Bahia, in 1974, with the legendary group Ilê Ayê.

And they have spread across the country, even far to the south.

Their music has its roots in Afro-Brazilian religion and culture.

These groups and their performances are about honoring black Brazilian culture, history, and resistance, which is at the heart of carnival.

“We, blacks, are the ones who really made carnival. And carnival is an opportunity to be in the streets and lift our voices and celebrate  our dances and song.”

Here, in Florianopolis, the Afro group Cores de Aide is taking it a step further. It’s composed of all women. They march and dance in defense of women, who have been particularly under attack, amid the government of far-right president Jair Bolsonaro.

They were joined in the streets by allies and members of other groups and social movements.

“The goal of this carnival block is to unite the women in struggle in Florianopolis, and to highlight our daily struggles here.”

“We are here to honor the women of the leaves. Those who are marginalized by society. Women healers. Women from traditional black communities. Women small farmers. Indigenous women. Candomblé priestesses. Women of the Landless Workers Movement. All of these women who are resisting. And each of us who is present today.”

Before performing they held a minute of silence in honor of Elenir de Siqueira Fontão, the director of a local state school who was brutally killed last week. Brazil is the fifth-worst country in the world for violence against women. Over the last three years, 3200 women here were victims of femicides.

“This act is important, principally at this moment when this country is not well, when public policies are weaker than ever. When women are dying. When LGBT people are being killed daily.”

“This is an act of political resistance, to give a counterweight to this chauvinista, racist, homophobic and LGBT-phobic society, that is only focused on the appearance. That’s why we are here fight. Everyone should feel welcomed here on this planet, which belongs to all of us.”

September 25, 2019
Sign Up for Our Newsletter
Help Us Make Real News!