Mae Flavia Pinto is one in a wave of Afro-Brazilian women running for public office, challenging Brazil's deeply entrenched racist and classist establishment. A field report

Mae Flavia Pinto is one in a wave of Afro-Brazilian women running for public office, challenging Brazil's deeply entrenched racist and classist establishment. A field report 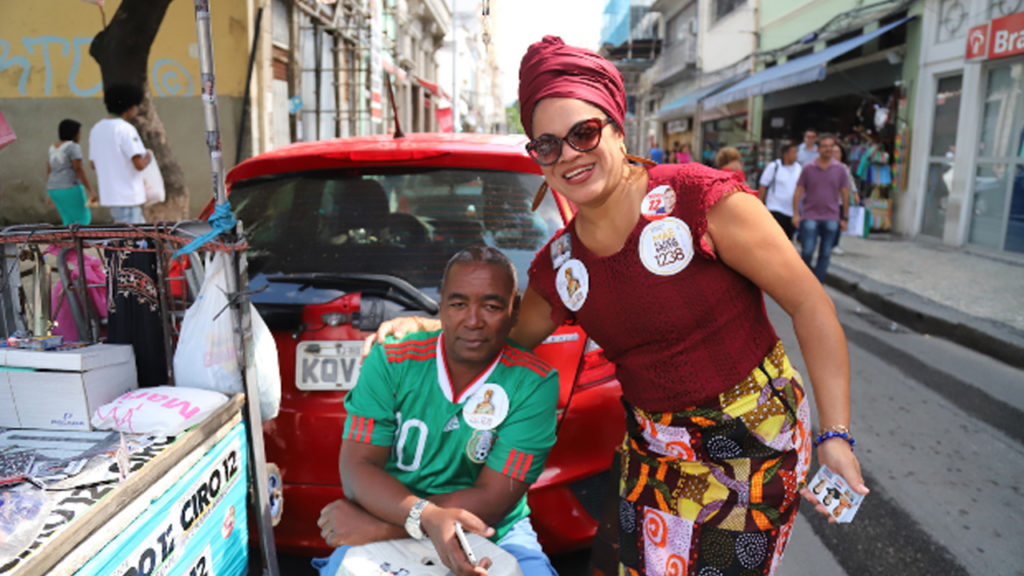 MIKE FOX: Mae Flavia Pinto is running for congress in Brazil. She is one of hundreds of women with their sights set on Brasilia this year. If she’s elected, she’ll be the first priestess from an Afro-Brazilian religion to be elected to Congress. And one of only a handful of Black women congressional representatives.

MAE FLAVIA PINTO: Brazil has only 10% feminine representation in politics. We are after countries like Uzbekistan, Afghanistan and Iran. It’s absurd. Ninety percent of men legislate about our bodies, about our lives, about our security.

MIKE FOX: Brazil continues to be an extremely sexist society. According to recently released UN statistics, women’s salaries in Brazil are more than 40% less than men’s. Women work four times more then men doing chores around the home.

Despite laws that mandate 30% of a party’s candidates are women, the number of actual female congressional representatives has remained low.

Black women are even less represented. They make up more than a quarter of the population, but hold only 2% of congressional seats. But in the wake of the murder of the black LGBT Rio councilwoman Marielle Franco, this may be changing. Black female candidates are on the rise in Sunday’s regional and national.

MAE FLAVIA PINTO: We have less than ten black people among the 513 representatives in Congress, where I am running for a seat. So how are we going to generate policies for racial equality if the majority of people there are not black, so racism doesn’t affect them.”

MIKE FOX: They have been further spurred on by the women’s movement in rejection to the candidacy of the far-right hopefully Jair Bolsonaro, and his sexist, racist and homophobic rhetoric.

Hundreds of thousands of women took to the streets across Brazil in late September. Millions have taken to social media against his presidency. The hashtag, #EleNao, or #NotHim, has gone viral.

AURELIELSA SANTOS: Today, I’m here against fascism, prejudice, discrimination and all forms of oppression, that are being pushed in this historic moment of struggle and democracy.

MIKE FOX: Bolsonaro is ahead in the polls for the first round. He is likely to face off in late October with the Workers’ Party candidate Fernando Haddad. But local and regional races, like Mae Flavia Pinto’s, may be just as important as the presidential vote this Sunday.