Activists held a die-in at the incinerator to demand its closing while wearing face masks and gloves to protect against COVID-19.

Activists held a die-in at the incinerator to demand its closing while wearing face masks and gloves to protect against COVID-19. 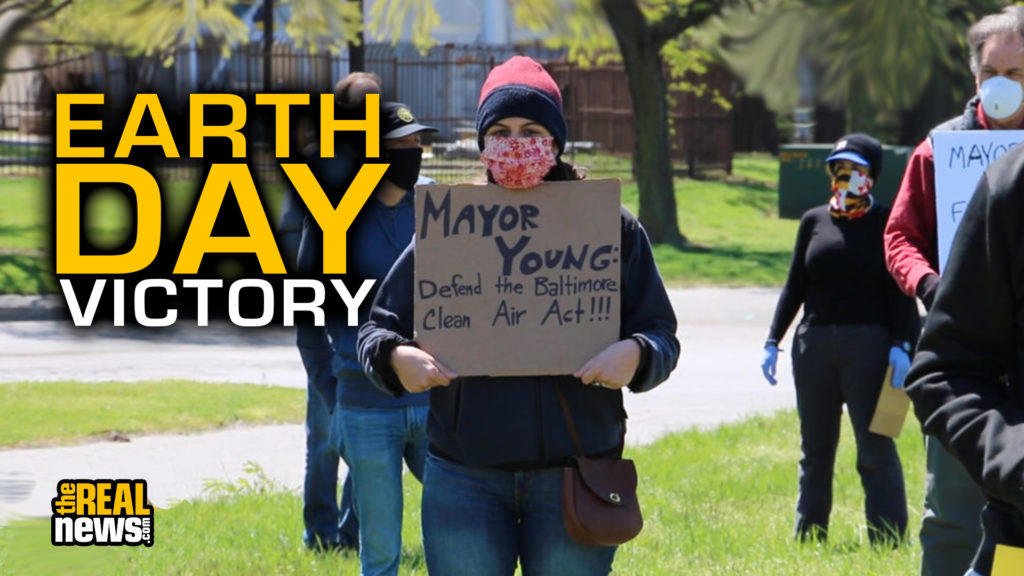 Speaker: Do you know this recent COVID-19 pandemic is a reminder to us all how fragile life can be.
Jaisal Noor: In Baltimore on Earth Day advocates celebrated what seems like a rare victory for the environmentaljustice movement and the long running fight to close down dirty trash burning incinerators. Activists hadjust completed a die-in at the incinerator to demand it’s closing when they got the news. They held signsthat read Mayor Young fight so we can breathe. They were calling on Baltimore City to appeal a federalcourt ruling, striking down a law, Baltimore’s Clean Air Act, which restricted dangerous air particulatematter that can be released by the incinerator. I’m now joined by Greg Sawtelle and [Tarik 00:00:47]Thompson who took part in the protest. So Tarik we know that COVID-19 is disproportionatelyimpacting working communities and African American communities. Just living near this incineratormakes you a lot more susceptible to those kinds of diseases because it really affects your health. Can you explain those connections?
Tarik Thompson: The South Baltimore communities are going to be communities that are going to suffer more from, aregoing to be more susceptible to it because they’re dealing with COVID-19 and they’re also going to bedealing with an incinerator.
The incinerator is already something that’s causing issues with respiratory and that’s why a lot of peoplelive in these communities have asthma.
Jaisal Noor: Greg, I wanted to ask you, you celebrated a small victory on earth day, but this bigger fight, which hasbeen going on for a year to stop this incinerator. And I know you worked in a campaign to get anotherincinerator that was planning to be built, halted several years ago. So this is really a long running battle.Can you talk about what the next steps are?
Greg Sawtell: Working with Tarik, Tarik went to the high school where students who started for your voice, we’re ableto, after five years, stopped the plan to build the nation’s largest trash incinerator, less than a mile fromtheir school. And so the work is only growing as more people understand what the incinerators really doto our health and to our planet.
And the answer that has emerged from the grassroots is we need a just transition to a zero waste system inBaltimore. One that isn’t centered on profit and making people sick. But that’s centered on conserving ourprecious natural resources, our planet, and people’s health. So the good thing is, is that we have a concreteplan of action for how to transition when, not if, we leave the BRESCO incinerator behind to a systemthat creates, in the plan, creates 1800 new jobs, living wage jobs, that we desperately need in Baltimore.That creates a system of recycling and composting for all residents, not just some.
So folks who live in public housing will have full access to the quality city services that we need to divertmaterials that been going to BRESCO to reuse and recycle those materials. So the next steps as we’recoming up on our city election is we need bold leadership. We need leaders who are going to step up andunderstand what a zero waste system is, now that Baltimore has a zero waste plan. It’s been passed andadopted by city council. So we need a mayor who’s going to fully embrace that and take leadership.
Jaisal Noor: The Real News will keep following this story and other key issues like incinerators and public health andhow that makes communities more susceptible to pandemics like COVID-19. I’m Jaisal Noor for TheReal News.