To protest the US-Saudi war on Yemen, peace activists blocked a Boeing weapons facility in Missouri with a bus — a symbol of the 40 Yemeni children on a school bus massacred by Saudi Arabia with a US-made bomb. The anti-war protesters speak with TRNN’s Ben Norton

To protest the US-Saudi war on Yemen, peace activists blocked a Boeing weapons facility in Missouri with a bus — a symbol of the 40 Yemeni children on a school bus massacred by Saudi Arabia with a US-made bomb. The anti-war protesters speak with TRNN’s Ben Norton 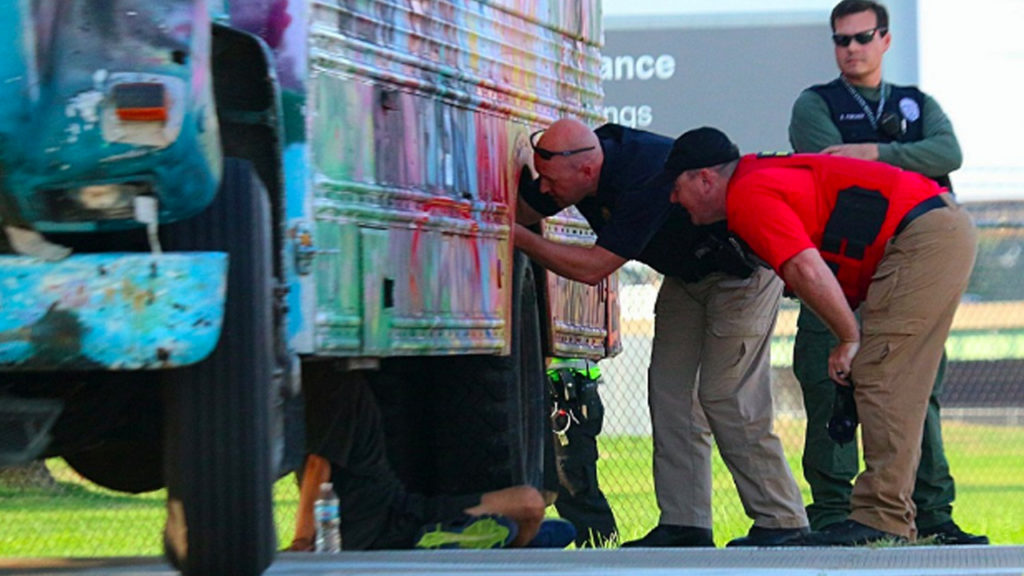 BEN NORTON: Peace activists are putting their bodies on the line to protest the joint U.S.-Saudi war on Yemen.

On August 27, two peace activists in St. Charles, Missouri used a bus to block the entrance to a weapons facility run by the arms manufacturer Boeing. Boeing is one of numerous U.S. military contractors that has created weapons for Saudi Arabia, and some of this military equipment has been used by Saudi Arabia to kill civilians in Yemen. Two activists, Ashton Howell and Phillip Flagg, were arrested after blocking the weapon plant’s main entrance. They had written “Boeing gains from Yemen’s pain” on the automobile. The activists used a bus as a symbol of Saudi Arabia’s August 9 bombing of a school bus in Yemen. In this brutal attack, Saudi Arabia killed at least 40 children and 11 adults and wounded another 79 civilians, all with a U.S. made bomb. The Real News interviewed the two peace activists after they were released.

PHILLIP FLAGG: So it’s something that I was kind of aware of, but I never saw it on any kind of mainstream news outlet. The main thing that seemed to break through a little bit that got us really, really interested was the August 9 bombing of a school bus at a market in northern Yemen. And again, I heard about that through alternative news outlets.

ASHTON HOWELL: It really sparked the fire underneath us to just do it, no matter- having the ducks in a row, and like, having media set up and these different positions set up to help us in making sure we’re safe, and so on and so forth. We’re just like- this is it, like, we can’t take it anymore. People are dying. We just have to do something about it.

I found out- I actually Facebook liked the picture of Donald Trump holding, like, the poster board with the Saudi representative, with all these arms that we’re selling them and intelligence. So I was like, what is that? And then we noticed that it was one of the, the planes was built in St. Louis, Missouri with, like, X amount of money, like, transaction. And we’re like, well, we’re in St. Louis right now. That’s, like, perfect. And we just started more honing in on that issue.

PHILLIP FLAGG: Unfortunately, Lockheed Martin did not have an office in St. Louis, or that’s where we would have been. So then we looked into it, like, you know, look, all these war contractors are guilty. They’re all selling weapons to Saudi Arabia. So we looked at what other ones were there. And it just so happened that the Boeing Defense Space and Security, which is like their weapons manufacturing arm, used to be headquartered in St. Louis. They’ve since moved the headquarters. But they have, like, a massive, massive facility there. They employ 15,000 people. So they have that whole thing.

And then we just happened to chance on to reading these are of the arms sales. They mention how they make JDAMs, the Joint Direct Attack Munitions, at their St. Charles factory in Missouri. And St. Charles is just across the Missouri from St. Louis. It’s just kind of the west suburb of St. Louis, really. And there’s only one Boeing building in St. Charles. So just through that thing we happened to find out exactly where those JDAMs were being made. We knew the exact building, or the exact facility it was. And we also happened to know that they were selling those weapons systems to Saudi Arabia. And we don’t know exactly with these bombings, but it’s virtually guaranteed they’ve been used in Yemen as part of the bombings, because Saudi Arabia is having to buy more.

But we happened to find out just exactly where we needed to be deploying the bus. There was only, they have one main entrance to that facility, also. Others were closed off, but could be opened. But there’s only one regular entrance, so it was, like, even more perfect. The bus could go right across the road. Cut it off. So we got really lucky with that piece of information. But Boeing just loves to brag in the press about their weapons sales. So thanks for that information, Boeing. We appreciate it.

BEN NORTON: The activists said they were excited to hear that their protest was recognized inside Yemen, which is under constant U.S.-backed Saudi bombardment. Multiple Yemeni journalists and activists thanked the two for their act of solidarity.

PHILLIP FLAGG: Like, the most meaningful thing to us has been two Yemeni journalists, one of them is living in Yemen now, and he mentioned, he commented on one of the feeds something about there’s war planes flying in the skies above us right now. And like, this bus is like a great symbol to us, like what you’ve done, and thank you.

Now, so that was the most meaningful part to us, just that they’d heard about it at all. But ironically I think what we would say is like, we’re, we’re just so sorry that we couldn’t do more. Because we’re only two people. We did what we could, but it’s so insufficient. I mean, the war continues. I think we share a common enemy or a common opponent in the U.S. government and its corporate backers, or corporate owners, I would say. Because, I mean, we live in the U.S., and it’s not like everything is great here for everyone. It’s great if you’re Jeff Bezos, or you know, Bill Gates, or you know, someone who owns a major corporation. But for the people of the United States, we don’t see the rewards from any of these imperialist adventures.

PHILLIP FLAGG: We had to, like, cut a hole through the bus, and I was underneath the bus with my arm kind of reaching up at about that angle.

And then he was inside.

ASHTON HOWELL: Well, there’s- they couldn’t get to him. Like, cut him out or take him out underneath it. So they had to go inside the bus from above it and get him out, which I was there as well, so it posed a longer of an issue for them. We barricaded each door in the front.

PHILLIP FLAGG: His PVC pipe was basically going through, like, a giant mound of concrete.

ASHTON HOWELL: And tires, and metal. And just making it very difficult for them to actually get me out for longer of the time for I’m sitting there.

BEN NORTON: The story behind the direct action is even more dramatic. The activists had many technical issues with the bus, and were only barely able to make it in time. But they were compelled to show their solidarity with Yemen.

PHILLIP FLAGG: The bus developed some really serious internal engine problems. We tried to get it fixed. We spent basically- or not basically. Actually all of our money trying to get it fixed. And by the end of that process mechanic said, all right, if it wasn’t this thing and it wasn’t this thing, you have internal engine problems. You need a whole new engine. And at that point we’re broke. Well, Ash had the idea, the brilliant idea on the way down, like, well, if the bus is going to go out we might as well send it out deployed in an action as opposed to just selling it. That’s just, you know, more capitalism. Why not actually use it in some useful way?

And then we heard about the bombing of the school bus. And then immediately we knew this is the thing to be doing, because you know, the bus is useful, A. And B, the messaging. You know, it was a bus that they hit. We have a bus that’s going to be gone forever after this. So it just really seemed perfect.

ASHTON HOWELL: There was internal engine problems, and we wouldn’t even know if we could make it another mile. But like he said, we limped it about 100 or so miles down to St. Louis.

BEN NORTON: This protest is part of a larger growing movement against the U.S.-backed war in Yemen. The two protesters, however, lamented the weakness of the antiwar movement, even in a time where a far right president like Donald Trump is in power.

PHILLIP FLAGG: I think a lot of that is due to the, you know, the Democrat effect where, you know you get Obama in. And then you have a Democrat in, everyone go home, there’s no need to do anything. But in reality he begins the drone assassination campaign which is, you know, clearly criminal. But there is just no real opposition to that.

And it is surprising that there hasn’t been more of a push with Trump. Why that is I’m not exactly sure. But I mean, it’s- the American public is doing very little about what’s going on right now, and it’s, it’s extremely unfortunate. I think it is, frankly, because of the Obama administration. I mean, I think that’s what the Democratic Party exists to do, is whenever there’s, like, a serious popular opposition to something, you just channel that outrage into these safe channels. OK, well, we’ve got to be serious and get people elected, and the blue team is going to be the red team this time, and the good guys are in. We can all go home. Professionals are taking care of it. But I think that basically took the wind out of the movement. And why it hasn’t come back since then with Trump, I’m really not entirely sure. It doesn’t make any sense. It should be there. Like, there’s opposition to his other policies.

I think maybe, frankly, it could be because his policies are really a continuation of Obama’s policies. And so, you know, if you’re a mainstream liberal at home it’s like, well, it’s just business as usual on that front. So no need to get involved, nothing wrong here. We’re just continuing to murder people all of the world for their resources. And that’s just, that’s the U.S.

October 10, 2019
Sign Up for Our Newsletter
Help Us Make Real News!