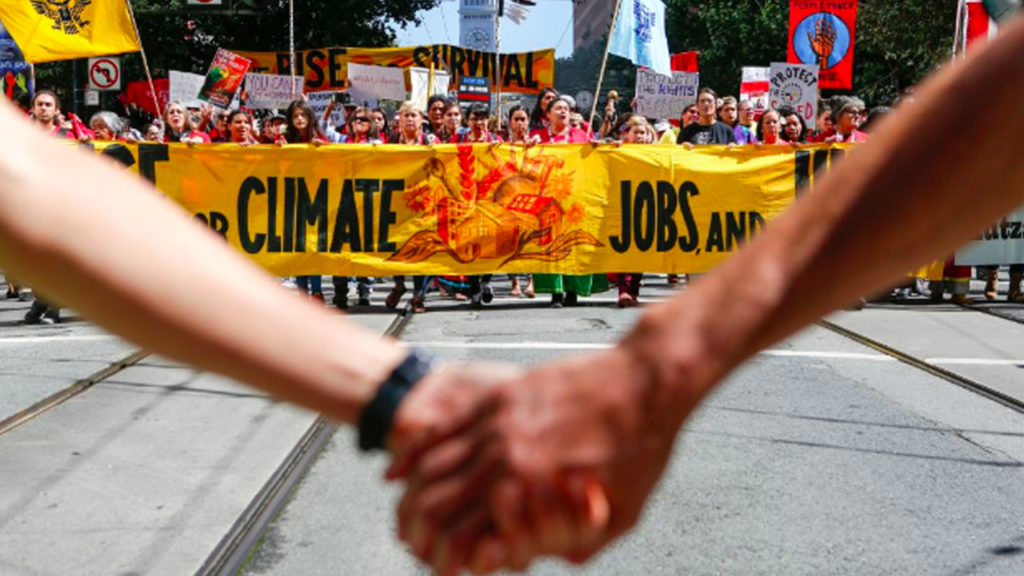 DHARNA NOOR: Tens of thousands of people took to the streets in San Francisco to demand an end to new fossil fuel projects, and demand investment in policies that immediately reduce fossil fuel emissions and create green jobs.

SPEAKER: To hurt the earth is to hurt who we are as a people.

SPEAKER: The climate crisis is making life more difficult for all people, including working people, and that the transition to community-owned renewable energy needs to be one that creates good union jobs; that allows people to support their families and their communities.

SPEAKER: My name is [Ninawa Hunikui] and I’m from the state of Acre in the Brazilian Amazon. I’m here to unite with other indigenous peoples of the world to defend mother earth.

SPEAKER: All across the country communities are coming together and figuring out how to hold our elected officials accountable to address climate change.

SPEAKER: California is burning. We still have several fires going on. And that’s a, that’s a result, right, of this climate catastrophe that we are seeing.

SPEAKER: We have firefighters who are out putting out the fires and some of them not coming home because of the effects of climate change.

SPEAKER: Here we are on a bay. We’re bordered on three sides by water. And a lot of the Bay Area will be flooded and unlivable in the decades in the future. And that would put a huge strain on San Francisco itself, like, the taxpayers would be paying for all utility damage that will be happening.

DHARNA NOOR: And since climate change is a global problem, people all over the world are rising up in places from France to Uganda.

SPEAKER: There are events in over 240 communities across the nation in almost every state. From town halls, to rallies, to trainings, tens of thousands of people are coming together today everywhere to work for climate, jobs, and justice.

SPEAKER: On September 12-14, California Governor Jerry Brown will convene civic leaders from around the world, who will gather at San Francisco’s Global Climate Action Summit. But some think the summit won’t do enough.

SPEAKER: Market-based solutions don’t work because they don’t center place-based solutions; solutions that come from communities that are highly impacted, and those that have been fighting on the frontline of the extractive economy.

SPEAKER: You keep saying it’s supply and demand. Well, listen to our demands. What we’re demanding. Let us have back our grassroots communities where we want to have community-scale gardening, where we want to have small-scale solar and wind that’s distributed. We don’t want this corporate control anymore.

SPEAKER: We really need to take a more cooperative approach towards our economy, and one that gives back to the earth, just as it’s been giving to us for many thousands of years. Under a green economy we need people to build green infrastructure, we need people to maintain the infrastructure, and we need people trained for this new economy. And so there’s a whole new sector that’s rising. It’s happening. And we really want to see it supported, financed, and accessible for all.

SPEAKER: Not providing permits for people, for oil industry to keep digging.

SPEAKER: There’s enough money in this city. We have more billionaires in this city than anywhere in the world in this city and elsewhere to make it a just transition for all of us.

DHARNA NOOR: Stay tuned for more Real News coverage from the Bay Area this week, where thousands are holding actions to demand decisive policy. With Will Arenas, this is Dharna Noor, San Francisco.