2018: A Year of Climate Devastation and Resistance

TRNN revisits the the apocalyptic extreme weather, dire reports, and resistance to climate inaction we saw in 2018. Help us make real climate news in 2019

TRNN revisits the the apocalyptic extreme weather, dire reports, and resistance to climate inaction we saw in 2018. Help us make real climate news in 2019 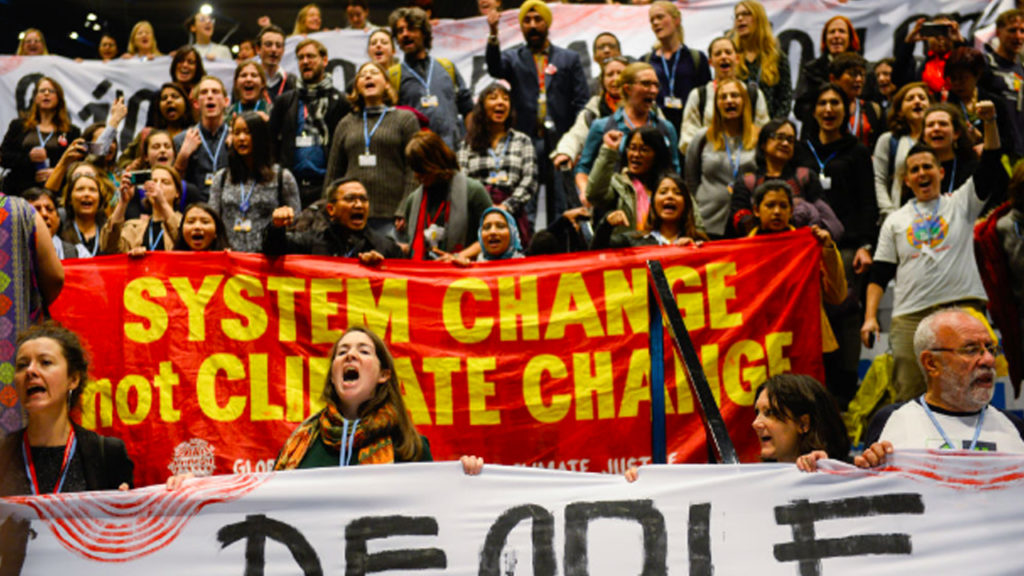 We started off the year with one of the hottest Januaries ever—the 5th warmest in 138 years since record keeping began, to be exact.

2018 saw record temperatures all over the globe. In Northern Siberia temperatures soared to 40 degrees above average. And parts of Algeria hit 124.3 degrees—the hottest temperature on record in Africa. Los Angeles hit its all-time high temperature of 111 degrees in July.

Heat waves are dangerous in and of themselves, and they also exacerbate wildfires—wildfires like the ones in Greece that melted cars and forced some into the sea to escape, and in Sweden, where officials deployed almost every municipal firefighter in the nation. California saw its worst wildfire in history—the Camp Fire in Butte County left almost 90 dead and forced tens of thousands of people from their homes.

Meanwhile, devastating storms also wreaked havoc. The strongest storm of 2018 was Super Typhoon Yutu, in the Northern Mariana Islands. Hurricane Michael was the first category 4 storm to ever make landfall on the Florida Panhandle—it killed over 40 people. This year North Carolina also saw a hurricane the size of the whole state, and the Midwestern United States saw devastating floods.

And that’s just a taste of the apocalyptic conditions we saw all over the world. Despite people like former EPA administrator Scott Pruitt saying that climate change could help humans flourish, there’s scientific consensus that climate change is fueling and sometimes even causing these disasters. This year, report after devastating report issued dire warnings. A federal report released on Black Friday showed that climate change could kill thousands, and cost the U.S. tens of millions of dollars—up to 10% of the GDP—by the end of the century. The Intergovernmental Panel on Climate Change showed we might be just 12 years away from irreversible effects of climate change ushered in by surpassing 1.5 degrees Celsius of warming over pre-industrial levels. And esteemed climate scientist Michael Mann told the Real News that that that report was conservative.

The IPCC said governments must make, quote: “rapid, far-reaching, and unprecedented changes in all aspects of society,” but so far, that’s not what we’ve seen. Global carbon dioxide emissions are set to hit a record high this year, according to a Global Carbon Project report. The Trump administration rolled back regulations on coal power plants and drilling and car emissions. Scott Pruitt resigned as EPA chief, but his replacement, Andrew Wheeler, is a former energy lobbyist.

Some officials have held meetings to take on climate change, but they, too, have been fiercely criticized. California governor Jerry Brown held the Global Climate Action Summit in Fall, but he and other participants caught a lot of heat for focusing on market based solutions. Hundreds actually disrupted Brown’s conference. They noted that in Brown’s time as governor, he approved twenty thousand new oil and gas permits. More recently, the UN held its climate conference in Poland for nation’s to make plans to adhere to the 2015 Paris Climate Agreement, but the IPCC and many others say those pledges aren’t nearly enough.

2019 will likely be an El Nino year, which will have an impact on global weather patterns and could usher in even more extreme weather events. But as winds pick up, so may the resistance to climate inaction.

A movement is brewing on Capitol Hill to bring forth a Green New Deal—a plan to end the U.S.’s reliance on fossil fuels within a decade, and create tens of millions of jobs. Some are pushing for the Green New Deal to fight militarism and reject profit-focused proposals, too. Extinction Rebellion is holding protests demanding climate action across the UK, and the yellow vest movement in France is pushing the idea that the elite and the fossil fuel industry should pay for climate reforms. Indigenous and frontline protestors disrupted COP24 and the Global Climate Action Summit. As the world faces disasters and holds demonstrations and releases reports and debates what real solutions are, we’ll be there. Thanks so much for watching our climate coverage all year, and stay tuned for much, much more in 2019.