A new Oxfam International study shows that climate change-fueled disasters have been increasing dramatically in the past ten years, and are now displacing 20 million people annually from their homes. The burden is highly unequal, with the poorest suffering the most.

A new Oxfam International study shows that climate change-fueled disasters have been increasing dramatically in the past ten years, and are now displacing 20 million people annually from their homes. The burden is highly unequal, with the poorest suffering the most. 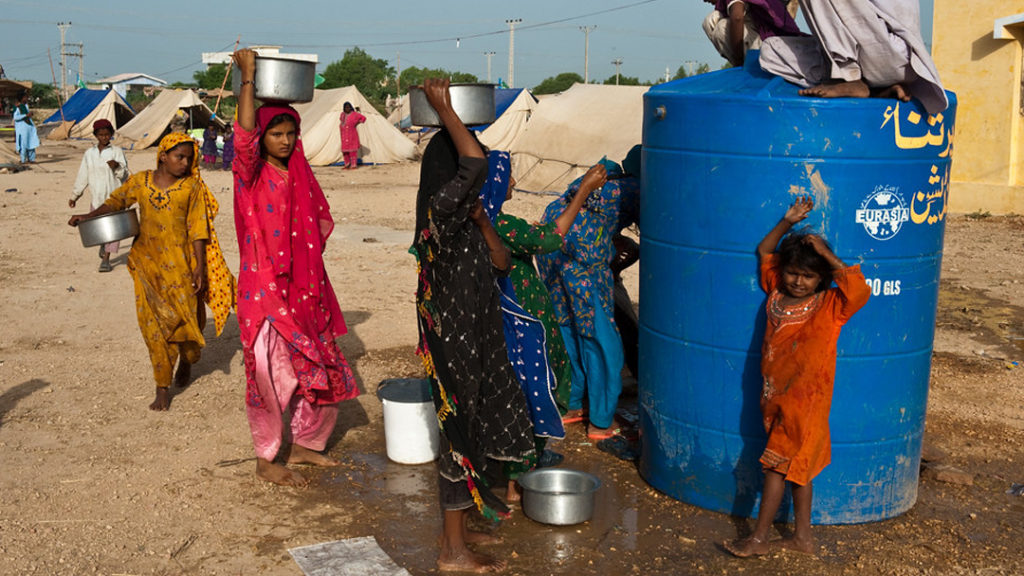 By the time we finish this interview, at least 300 people will have been displaced from their homes because of climate change. This is according to a new study conducted by the organization, Oxfam, which shows that every year 20 million people are displaced because of climate change. This comes to one person every two seconds. The study’s title is Forced from Home: Climate-fueled Displacement.

Among the study’s findings is that people are seven times more likely to be internally displaced by climate-related disasters than by earthquakes and volcanic eruptions, and three times more likely than by conflict. This was not always the case, since climate-related disasters increased from around 200 per year in 2008 to just over 1,500 10 years later. Oxfam published the study ahead of the COP25 Climate Summit, which is taking place this week and next week in Madrid, Spain.

URSULA VON DER LEYEN: In 10 days from now, the new European Commission will present the European Green Deal, and if our common goal is to be a climate neutral continent in 2050, in the European Union we have to act now. We have to implement the policies now, because it is a generational transition we have to go through.

GREG WILPERT: To discuss Oxfam’s study on climate-fueled displacement, I am now joined by Nafkote Dabi. She is Oxfam International’s Climate Policy Lead, and she joins us from Madrid, Spain where she’s attending the COP25 conference. Thanks for joining us today Nafkote.

NAFKOTE DABI: Thank you so much for having me here Greg.

GREG WILPERT: As I mentioned, your study finds that the total number of people displaced by climate-related disasters has reached 20 million per year, but clearly this does not affect all countries and all populations equally. Now, your study shows that people in poor countries are four times more likely to be affected than those living in high income countries. Why is there such a huge disparity in the effects according to income levels? That is, shouldn’t geography be the main determinative factor for the effect of climate-fueled disasters?

NAFKOTE DABI: Whether you’re living in the U.S. or in Spain, you’ll be experiencing the impacts of the climate crisis. As we have seen in California, people have been displaced because of drought and wildfires, but the majority of people that are being impacted are living in poor countries. In 2017 our report actually highlighted, if you live in poor countries, you’re five times likely to be impacted compared to if you’re living in a rich country. Now our study also shows you’re four times more likely to be displaced by climate-related disasters if you live in poor countries compared to if you’re in the U.S.

These communities are contributing actually the least when it comes to the climate crisis, but their livelihood is very closely connected with nature. They need rain, for instance, to grow food. As the climate is changing, drought is getting worse, and that’s affecting the availability of rain, so they’re unable to produce food. There’s a lot of uncertainty, and these countries are poor, and they are unable to adapt to the changing situation, to these disasters. The problem with climate change is, it’s fueling these disasters. The intensity of droughts, the frequency, is increasing, so communities are unable to cope.

We are talking about very resilient communities. For instance, Eastern part of Ethiopia from the Somali region, these pastoralist communities they have survived different droughts, but now the intensity and the frequency has destroyed their livestock, so they’re depending on humanitarian assistance. I would like to highlight how these communities are resilient, but these repeated disasters have taken a huge toll on them. Now they don’t have that much means to survive, so they are displaced, and relying on humanitarian disasters. This is what we are seeing in different countries.

GREG WILPERT: Now, another calculation that your study makes is about the economic damage that climate-related disasters cause. On average, you find that it’s about 2% of the country’s national income, that is across the world, but small island developing states, it reaches a whopping 20% of national income. Now, clearly these are not the only ones. These are the countries that are least able to afford such cost, but they’re also the ones who are least responsible for climate change.

Now, the 2013 COP summit in Poland instituted an international mechanism for loss and damage, which was supposed to address the issue of compensation. This is supposed to be one of the top issues of this year’s summit as well. My question is, has there been any progress on the issue of compensation, and what do you expect to happen, or hope to happen in Madrid in this regard?

NAFKOTE DABI: Yes. We are really hoping that the world leaders are going to make Madrid matter. This is the only mechanism we have, and it has to work. This is the only international instrument that binds all of us. In some of the informal consultations going on between developing countries, the least developed countries, AOSIS, G7 plus China, and so on, and developed countries like from the U.S., Australia. You can see from the developing countries there is a consensus that there is a need for a new financing facility. This is to address issues beyond mitigation, issues beyond adaptation, issues that are beyond adaptation, loss and damage. This is economic related, non-economic related. There needs to be a new finance facility to support countries.

Second, they’re also asking for gap assessments based on this need assessment every year for reporting to take place and based on this finance will also be given to countries that need it. Now, the developed countries are saying this should be addressed under humanitarian. This discussion is still taking place, and there is a huge disagreement. From Oxfam’s side, we are also asking, there needs to be funding available to support communities, rebuild their homes, rebuild their lives, and so on. That’s what we are pushing for. We are also saying there needs to be deeper cuts in emission. That’s another discussion also that’s taking place.

NAFKOTE DABI: It’s hard to establish. We don’t have specific data to say there’s a specific link between climate change or extreme weather events and conflict. But at the same time, if you look at countries, for instance like Somalia or in the Sahel region, and I’m sure in other parts of the world, you tend to see where in areas where there’s lack of access to resources because resources are dwindling like due to droughts, your access to food is decreasing, or access to water, that creates conflict. But our report, what it highlights is, in places like Somalia, for instance in 2018, communities have been displaced, 7.5% of the population have been displaced due to flooding and conflict.

This country has also been experiencing droughts due to climate change, and so it’s grappling with all these issues, and millions of people are struggling. As the situation continues to worsen, the climate crisis, and if we are not taking action, access to resources is going to be really a struggle for communities. Access to water resources for instance, and that’s what creates a clash between communities. There needs to be further investigation in this area, and this is actually what we are going to do moving forwards.

GREG WILPERT: Now, climate displacement also means, of course, refugees. I mean that’s really what we are talking about, and the issue of refugees has become very politicized in North America and in Europe. How do you find a balance between raising awareness about climate-related disasters without exacerbating xenophobia in the fight against climate change?

NAFKOTE DABI: For us, we want to highlight that displacement caused by climate-related disasters, or actually any other displacement, communities really don’t want to leave their area. I mean of course there is conflict. That’s another issue. But for instance, if you look at the Pacific region, communities are really traumatized because of rising sea level. They have to leave where they have lived for years. Their ancestors have always been there, so they have a cultural attachment. They are attached to their land, so they don’t want to leave. Migrating to another country is a last resort for them, and people have to understand.

But at the same time, if we don’t take action, and as you see, we have been hearing how the climate crisis is getting worse. But in terms of action, world leaders are not moving fast when it comes to that. There is still a lot of negotiation about the same issues year after year, so action is not coming fast. As the climate crisis keeps on getting worse, of course it’s going to be catastrophic. We might see more people being displaced, and looking for other alternatives. But migrating to another country is a last resort. But we have to take action, and we have to support communities to survive where they’re at, to be able to adapt, and if they can’t adapt, we need to provide different means so that they can revive their lives.

GREG WILPERT: Okay. Well, we’re going to leave it there for now, but as usual we will continue to cover the climate crisis and all of its aspects. I was speaking to Nafkote Dabi, Oxfam International’s Climate Policy Lead. Thanks again, Nafkote, for having joined us today.

NAFKOTE DABI: Thank you so much Greg.

Nafkote Dabi is Oxfam’s Climate Change Policy Lead – she’s worked with the anti-poverty charity for five years on humanitarian issues and has worked in countries across Africa with communities affected by the climate crisis.