The US says Maduro collaborated with the FARC to “flood the US with cocaine." It's an additional legal pressure to get Venezuela's president to step down.

The US says Maduro collaborated with the FARC to “flood the US with cocaine." It's an additional legal pressure to get Venezuela's president to step down. 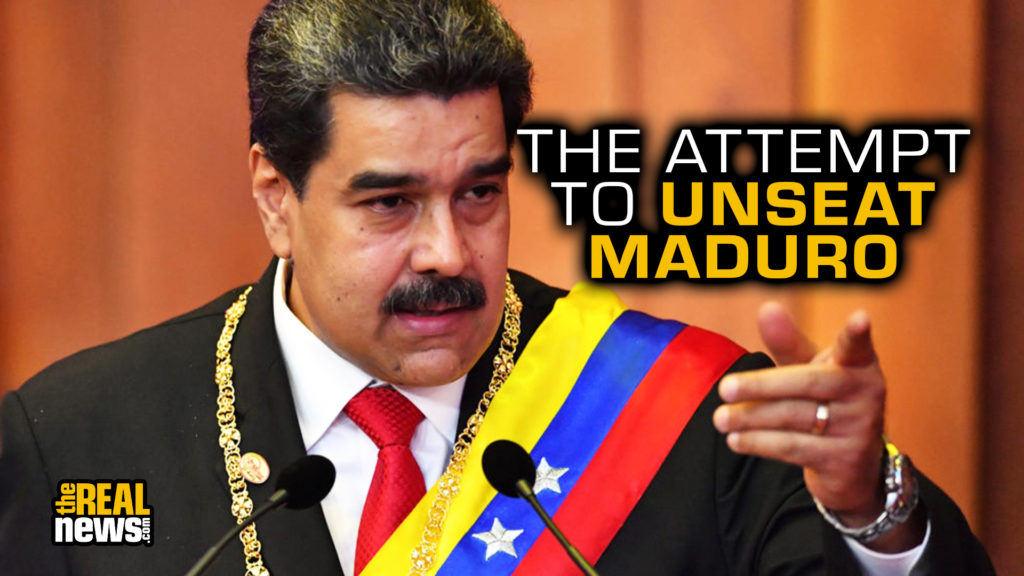 Speaker 2: The government of Donald Trump, in an action that is extravagantly extremist, vulgar, and miserable, has put out a number of false accusations, like a racist cowboy of the 19th century who puts a price on the head of revolutionaries.

Kim Brown: Well, joining us today to discuss the ramifications of this is Joe Emersberger. He is a writer and a contributor to FAIR.org, The Canary, also Telesur English and CounterPunch. He joins us today from Windsor, Ontario. Joe, thank you so much for being here.

Joe Emersberger: Thanks for having me on.

Kim Brown: So on its face, the charges are a bit laughable, clearly serious, but at a time of a pandemic that the United States government is spending any time attempting to charge the sovereign head of another country with drug trafficking. Does the United States have any jurisdiction in this area to be charging Nicolas Maduro with drug trafficking?

Joe Emersberger: Well, yeah. The charges are laughable. I mean, they can claim jurisdiction. They can make an argument that drug trafficking brings drugs into the United States and does harm to the United States. In fact, the indictment against Maduro says that Maduro’s strategy is to, in somehow unexplained way, flood the United States with drugs to harm the United States and weaken it, which is really preposterous. The only people who could take that kind of allegation seriously are people who just believe that anyone the United States opposes has to be totally insane. I mean, for example, Saddam Hussein was a brutal dictator, but he was not irrational. He was not insane. He did not have weapons of mass destruction. But the part of the propaganda is always that whoever the United States wants to destroy is that they’re just out of their minds, they have no rationality, and so anything goes. You can accuse them of anything.

So the allegation itself, if you read the indictment, not only was Maduro involved, which is frankly laughable itself, but that the strategy behind it was to somehow hurt the United States by flooding it with drugs. I mean, it’s just crazy. And also in the region, drugs are mainly produced in Colombia, mainly transported through other countries whose governments are aligned with the United States, and only a small percentage even goes through Venezuela at all. That’s just according to the DEA’s own data. So it really doesn’t make sense on its face.

But I think there’s another aspect that you were saying, a few other important points. One is that one of the star witnesses that the United States is going to call is a general who says publicly that he was getting arms together to overthrow Venezuela’s government by force and that he was working with Juan Guaidó, the person the U.S. recognizes as president, and also with U.S. advisors. So based on all he said publicly, actually Venezuela would have about a thousand times more grounds for their courts, for their prosecutors to issue indictments against U.S. officials to charge them and to seek to extradite them into Venezuela to face charges for this conspiracy, which is a conspiracy to do violence against the government.

Now, of course, that will never happen because the country just isn’t powerful enough to enforce its laws the way the United States gets to play global cop and claim jurisdiction all over the world. But actually, Venezuela has much more grounds to charge and to extradite U.S. officials by now than the other way around.

Kim Brown: So Joe, this seems like the latest attempt by the United States to undermine and discredit the elected leadership of Venezuela as we’re seeing here with Nicolas Maduro, and then we saw numerous times under the leadership of the late Hugo Chavez. Why is the United States determined to seize control in some way, shape, or form of Venezuela?

Joe Emersberger: Well, what we see thanks to the WikiLeaks revelations, when you look at what U.S. officials are saying in private to each other and their overwhelming concern is especially this idea that the United States wants to play lender of last resort always throughout the Americas. They want to be the country that others rely on, depend on. And if there is an alternative source of financing, an oil rich country that could potentially become an alternative for other countries, that undermines their ability to exert influence in the region. And that’s their overwhelming concern. If you look at the countries that United States has gone after in recent times, Iraq, Russia, Iran, Venezuela, they’re all oil exporting countries, big oil exporting countries, and that oil wealth gives them the potential, mind you, to become regional players in their own right.

Kim Brown: Joe, when I read this story on Thursday, my first thought was, “Oh, this is Manuel Noriega all over again.” For those who don’t remember the 1989 invasion of Panama and the forcible removal of then president Manuel Noriega, he was also brought up on drug trafficking charges in the United States where he did eventually serve some time. The U.S. government, in your opinion, Joe, are they going to attempt … We know they put the $15 million bounty on president Maduro’s head, but is there any chance there could be an invasion of Venezuela in order to extract him?

Joe Emersberger: I think a lot of things are, I think, more likely. One thing that’s important to remember about Panama, like some people have said, it basically came pre-invaded because it already had a U.S. base there, which Venezuela fortunately does not have, so it would be more difficult for that region. But the trends are definitely extremely alarming. As of August of 2017, Trump has repeatedly made military threats and threatened blockades. He’s made it clear to the generals, made it crystal clear, publicly encouraging to rebel, sends the message constantly that if you do something to Maduro, if you overthrow the government, no problem. You’re not going to have any problems from us. We’ll welcome it. So they’ve been sending that message repeatedly.

So could they go to the extreme of actually doing it themselves? I suspect what they’d try first is what this general I talked about earlier has admitted to doing, to try and organize some kind of proxy for a contra force like they used in Nicaragua to attack, but so far that hasn’t got off the ground. But yeah, it’s a horrifying prospect because as they escalate the rhetoric like this, at some point what they call U.S. credibility becomes at stake. The mafia Don can only threaten you so many times, eventually the mafia Don has to follow through or he loses street cred. So that’s kind of how I see the U.S. I see the U.S. as the mafia who eventually might have to establish its street cred by following through on its threats. For now, they’re just threats, but they’re very frightening.

Kim Brown: So the Maduro government in response to this latest action by the U.S. has called this an act of desperation. After all the other attempts have failed, political coups, economic sanctions, Nicolas Maduro still remains in power. However, could this latest move actually deal a blow to a nation that is already politically unstable?

Joe Emersberger: Well, we have these sanctions that Trump introduced in August of 2017. He basically drastically intensified Obama’s sanctions, made them much more punishing, made them much more clearly aimed at the entire economy. So by the end of 2018, a study by Mark Weisbrot and Jeffrey Sachs said that by the end of 2018, they had already possibly been linked to 40,000 deaths. Now since that time, he’s kept increasing the severity of the sanctions. So these are very murderous sanctions. So what’s happened with the coronavirus epidemic, there’s more pressure on them now. I think they’re feeling a bit of pressure in the U.S., this is really murderous. We have this global pandemic and you guys are still punishing countries. And so it seems like the Trump administration’s tactic is just to double down and get even crazier. No, now we’re going to have to try even harder to demonize them to justify these murderous sanctions and these threats. So it seems like their defense has been an offense, just get even crazier with the allegations.

Kim Brown: Are we able to get a sense as to how this news or rather the support on the ground in Venezuela for either Nicolas Maduro or Juan Guaidó? How are the Venezuelan people dealing, obviously, with everything that they have had in terms of the recent challenges in dealing with daily life in the wake of all these sanctions and now with the COVID-19 outbreak, a pandemic obviously affecting their region as well? Whom do the Venezuelan people have trust in and who are they recognizing as their own leader? Are we able to get a sense of that?

Joe Emersberger: Well, the best polls we have, the best indications we have are that Maduro has a very solid base of at least 30% of the population. That’s how many turned out to vote for him in the 2018 presidential election. It also closely resembles what happened in the regional elections, which were done several months earlier. So the Maduro government has a solid base. Guaidó has not shown any capacity to mobilize people, even before the pandemic, of course, closed down mass mobilizations for anybody. But also he himself is linked to drug traffickers. He’s been photographed using a Colombian drug trafficking gang to basically serve as his informal security guards while he was performing an aid stunt back in February of 2019.

So he’s been hit with scandals. He’s failed to do what he said he was going to do, which is overthrow the government. So his credibility is very low, but probably 20, 30% of the public are so against the government that they’ll support anybody, even him. But they both have issues, but I would say Maduro has a solid support. But of course, you have to wonder, being hit so hard with sanctions, how long they can go without suffering a horrendous humanitarian disaster. It’s not even a question of whether he stays in power or not, but how this will play out in terms of the humanitarian consequences of U.S. sanctions. And on top of that, a pandemic, and on top of that, a dramatic fall in oil prices that has taken place since the coronavirus hit. The oil prices have fallen by half, so that’s very serious.

Kim Brown: We’ve been speaking with Joe Emersberger. He is a writer and you can find his work at a variety of places, including FAIR.org, Telesur English, The Canary, and CounterPunch. And we’ve been discussing the U.S. government charging Venezuelan president Nicolas Maduro with drug trafficking. In response, the Maduro government has called this latest act desperate. Joe, we appreciate your time. Thank you so much for speaking with us.

Joe Emersberger: Thank you very much.