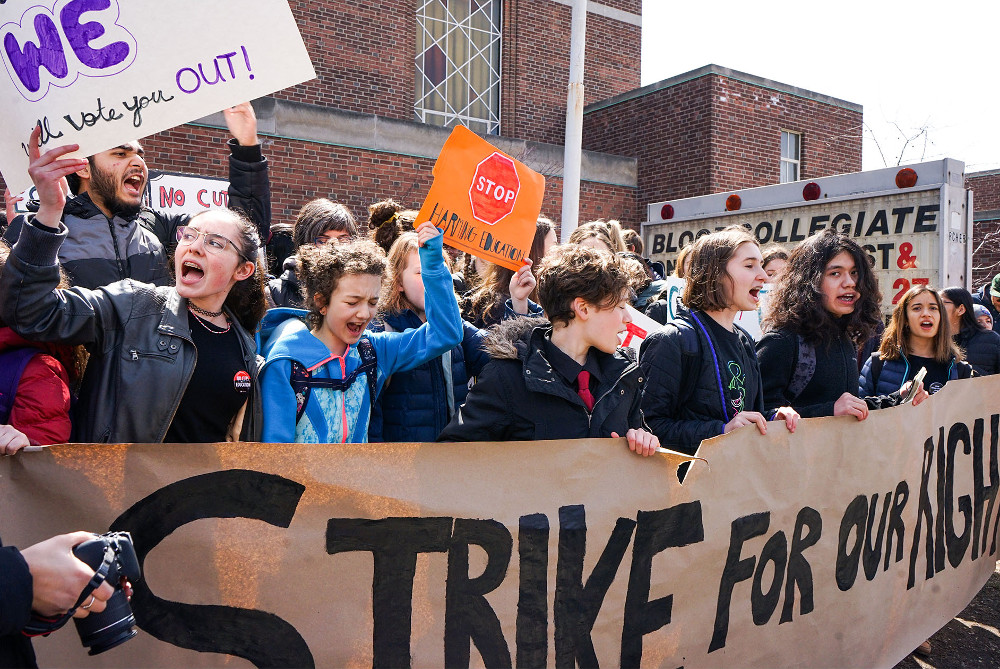 When it comes down to it, the question is what do we want for our schools?

The government of Doug Ford is actually quite clear about this. It wants to cut money from schools as well as their neighbourhoods, setting them back on their heels and making them more malleable for a government set on hollowing them out. It would like to force schools to privatize, charge more fees, perhaps even offer themselves up for businesses to sponsor them, much in the way that charter schools operate in the USA. The Ford government has brought in so many changes, so quickly, that parents, students and educators have had no time to react to them all.

There is nothing new about this. In 1997, the Progressive Conservative government of Mike Harris took over funding from all the school boards across the province and squeezed it hard with a funding formula that never worked. It would never take into account the varied needs of different schools in different areas with different populations and stresses upon them. According to a 2015 article “Harris-era Hangovers” by Hugh Mackenzie, the Toronto District School Board (TDSB) has, in most years, faced yawning gaps between what it needs to run schools and programs and what it receives from the government. In 2012, he says that gap was $109-million; the next year there was a further $50-million and in 2014, another $30-million. Whether Liberal or Tory, the gap between what this board needs and what it gets has been pretty much constant.

The gap was so bad in 2002, that the TDSB trustees refused to cut $90-million from the budget that year. As a result, the province took over the board and appointed supervisor Paul Christie, who came in and made the cuts he was told to: millions of dollars from caretaking, staff development, vice-principals, supervisors, assistants, secretaries and many others. Yet, in the end, he couldn’t balance the TDSB’s budget for the Tories.

What Do We Want for Our Schools?

Schools must have a meaningful curriculum with courses that reflect the widely varied interests of students and enable them to explore and ask questions, without the distractions of standardized tests like EQAO or learning outcomes. Students need to be engaged, active learners and citizens no matter where they come from in the city or their background. Those who are having trouble coping in school must have the support of well-trained individuals like social workers, psychologists, speech and language pathologists and others who can develop sensible strategies to help. Their teachers require the support and advice of other educators who can help them develop their skills and understanding.

Schools must be democratic places with School and Community Councils gaining decision-making power along with the parents, educators and students who rely on them as the centre of their community. They must be free of racism and prejudice. The activities that go on in them need to reflect the backgrounds of the many people who attend them. The educators in them must further their children’s knowledge of the history and culture of Indigenous peoples so they can truly reconcile with them rather than paying lip service in the form of land dedications. To be truly democratic, all activities must be open to all children regardless of their ability to pay.

Schools have to be well-maintained and safe, providing roles for the many adults who tend to the buildings and the children in them. We need to recognize that the different adults who work or volunteer in their schools are as important as teachers in keeping students safe and in giving them a sense of community.

There is nothing radical about any of these ideas. They are reflected throughout the TDSB “budget drivers,” the guides for Board decisions that Director John Malloy referred to frequently last week as he proposed cut after cut to the budgets of 2019 through to 2021. It must have been a heart-wrenching task to dig the grave for public education deeper than ever.

This is a terrible budget and that is not denigrate the efforts of TDSB staff, but to recognize the strictures under which they worked. It comes at a time when there have already been deep cuts to schools. CUPE Local 4400 President John Weatherup fears for the safety of his members employed in helping needy kids who have already seen their support dwindle over the years. Outdoor education for urban children is placed further from their reach. Many staff who support educators will be gone. The efforts the Board has made to hire people who reflect the backgrounds of the kids they teach will be compromised.

I truly sympathize with trustees as they ponder the decisions they have to make about the coming budgets. They worry about explaining to constituents why their schools, already under stress will have less to work with in the coming years. They worry about losses to their local school budgets. They also wonder what to do about it. Do they say “No” to this budget – turn it down and face the inevitable? That could mean once again, a supervisor being appointed to take over their jobs and make the cuts Doug Ford wants. They fear a supervisor would make far worse cuts than the TDSB management has proposed.

Local OSSTF President Leslie Wolfe told School Magazine: “The worst of the damage of the cuts by the Progressive Conservative government is yet to come. At some point trustees may have to say ‘we can no longer do this.’ But I can understand why they wouldn’t want to risk the imposition of a supervisor this early in the term.”

As difficult as it is, I think trustees do need to say “No” to this budget. They were elected to support public education in Toronto – not stand by helplessly and watch as basic principles like equity, safety and quality teaching are sacrificed to the whims of a provincial government that won 40 per cent of the vote in the last election, but acts like a dictatorship. They will lose their credibility as trustees if they go along with this budget. Their opposition to future government budgets won’t be taken seriously.

Rejecting it could mean a TDSB under supervision and worse cuts. Those might come in future budgets anyway. But, those cuts would be Doug Ford’s alone – the man who says the province is broke, but turns down revenue. Doug Ford should be the person Ontarians turn to when they get sick because public health has been undermined, when their family members die from drug overdoses because he’s cut prevention centres, when they can’t find housing because he’s exempted new rental units from rent control, when their children can’t graduate from their high school because it can’t offer the courses they require, when they no longer get the help they need because the people who could give it to them have been let go, when the ceiling of their children’s school collapses – when schools become warehouses for those who can’t afford a private “choice” – a word of which this government is especially fond.

Doug Ford and his band of cheerleaders must bear the burden of what they have done in the short time they have occupied Queen’s Park. They can’t, as John Weatherup said, go “whistling by the graveyard” as others do their dirty work for them. As cities, boards of health, social advocates, unions and so many more people organize to oppose this government, so too must the trustees of the TDSB and say “No” to this budget. •