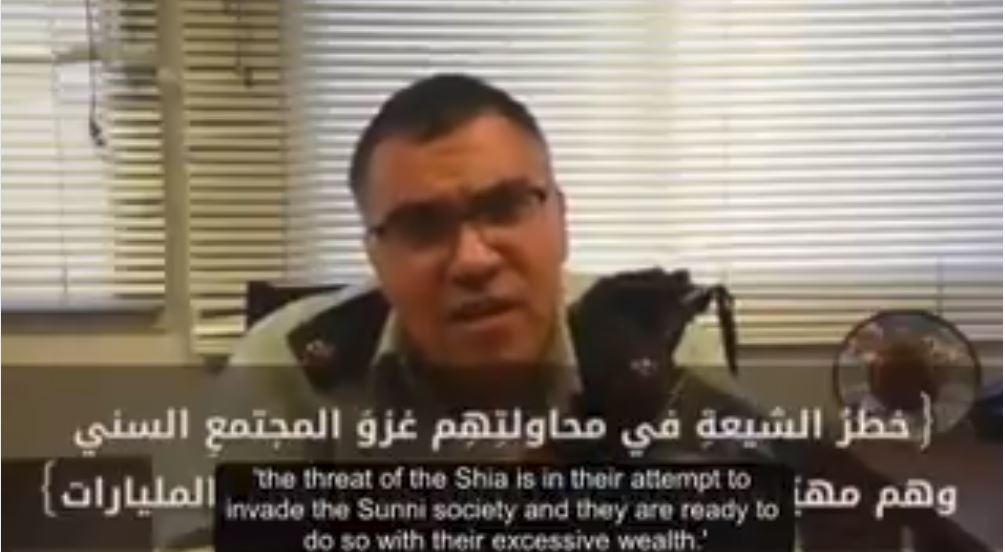 Amid ever closer cooperation with Saudi Arabia, Israel’s military appears to be adopting the kind of sectarian anti-Shiite rhetoric that Saudi Crown Prince Mohammed bin Salman is abandoning as part of a bid to develop a national rather than a religious ethos and promote his yet to be defined form of moderate Islam.

The Israeli rhetoric in Arabic-language video clips that target a broad audience across the Middle East and North Africa emerged against the backdrop of a growing influence of conservative religious conscripts and officers in all branches of the Israeli armed forces.

The clips featuring army spokesman Major Avichay Adraee were also designed to undermine support for Hamas, the Islamist group that controls the Gaza Strip and backed recent mass anti-Israeli protests along the border with Israel, in advance of a visit to the Middle East by US peace negotiators Jared Kushner and Jason Greenblatt.

The visit could determine when US President Donald J. Trump publishes his long-awaited ‘art of the deal’ proposal for a resolution of the Israeli-Palestinian conflict that despite Israeli and tacit Saudi and United Arab Emirates backing is likely to be rejected by the Palestinians as well as those Arab states that have so far refused to tow the Saudi line.

Saudi Arabia and the United Arab Emirates, in tacit cooperation with the Palestine Authority on the West Bank, have adopted a carrot-and-stick approach in an as yet failed bid to weaken Hamas’ control of Gaza in advance of the announcement of Mr. Trump’s plan.

Citing a saying of the Prophet Mohammed, Major Adraee, painting Hamas as an Iranian stooge, asserted that “whoever acts like a people is one of them… You (Hamas) have officially become Shiites in line with the Prophet’s saying… Have you not read the works of the classical jurists, scholars…who have clearly warned you about the threat Iranian Shiism poses to you and your peoples?”

In a twist of irony, Major Adraee quoted the very scholars Prince Mohammed appears to be downplaying. They include 18th century preacher Mohammed ibn Abdul Wahhab, whose ultra-conservative anti-Shiite interpretation of Islam shaped Saudi Arabia for much of its history; Taqi ad-Din Ahmad ibn Taymiyyah, a 14th century theologist and jurist, whose worldview, like that of Wahhabism, inspires militant Islam; and Sheikh Yusuf al-Qaradawi, the Egyptian-born, Qatar-based scholar, who was designated a terrorist by Saudi Arabia and the UAE because he is believed to be the spiritual leader of the Muslim Brotherhood.

“The enlightened Salafi scholar Imam Mohammed ibn Abdul Wahhab warned you about the threat posed by these people to the Islamic faith with the heresies that they adhere to. He says: ‘Look at this atheist’s words. You will see that he employs rafidah (rejectionist) terms. They (the rafidah) are more harmful to the faith than Jews or Christians….’ You follow the Iranians who pose a greater danger to you than any other force,” Major Adraee said referring to Shiites in derogatory language employed by ultra-conservative Sunni Muslims.

Major Adraee went on to quote Ibn Tamiyyah as saying: “I know that the best of them are hypocrites. They fabricate lies and produce corrupt ideas to undermine the Islamic faith.” Hypocrites is a term often used by ultra-conservatives to describe Shiites.

Major Adraee cited Sheikh Qaradawi as asserting that “the threat of the Shiites is their attempt to penetrate Sunni society. They are able to do so with their excessive wealth.”

Addressing supporters of Hamas, Major Adraee asked: “Do you still want to be allies with these corrupt people while you claim to follow Islam…and respect Islamic scholars whose teachings you proudly disregard? Don’t be hypocrites.” Major Adraee concluded his remarks by warning that those who guided by Iran caused disruption would “be punished in the hereafter.”

Major Adraee’s remarks reflected not only Israeli public diplomacy tactics but also the Israeli military’s changing demography. Religious recruits accounted for 40 percent of the graduates from last year’s officer training course although they have yet to graduate to the military’s most prestigious command posts.

Israel Defence Forces (IDF) chief of staff Lieutenant General Gadi Eizenkot this month passed over Brigadier General Ofer Winter, the military’s most prominent religiously driven officer, in the promotions to division commander, one of the IDF’s most prestigious postings,

As commander of Israel’s elite infantry Golani Brigade that suffered high casualties in the 2014 war against Hamas, then Colonel. Winter made headlines by declaring holy war on the Palestinians. “The Lord God of Israel, make our way successful. … We’re going to war for your people, Israel, against an enemy that defames you,” the general told his troops.

Military sources said Brigadier General Winter was not passed over because of his religious or political views but as result of General Eizenkot’s desire to promote younger officers.

Major Adraee became the first serving Israeli military officer to be published by a Saudi publication when Elaph, a London-based, award-winning independent news portal established by Saudi-British businessman and journalist Othman Al Omeir, published an anti-Hamas article the Israeli had co-authored. Mr. Al Omeir is believed to have close ties to Prince Mohammed’s branch of the Saudi ruling family.

While Israel and Saudi Arabia have found common ground in their opposition to Iran, Major Adraee’s anti-Shiite rhetoric appeared to hark back to language that Prince Mohammed has recently sought to avoid in his effort to redress the kingdom’s image as a stronghold of ultra-conservatism and sectarianism.

Although he accused Iran in an interview in April with The Atlantic of wanting to spread “their extremist Shiite ideology,” he insisted that “we don’t believe we have Wahhabism. We believe we have, in Saudi Arabia, Sunni and Shiite… You will find a Shiite in the cabinet, you will find Shiites in government, the most important university in Saudi Arabia is headed by a Shiite… We have no problem with the Shiites. We have a problem with the ideology of the Iranian regime.”

Said Mohammed Husain F. Jassem, a Middle East analyst with London-based research group Integrity UK, who translated Major Adraee’s clips into English: “The rhetoric used by the IDF is exactly the same as the one used by ISIS, al-Qaeda, and anti-Shia bigots in propaganda videos and print.”