Welcome back to TRNN’s Climate Crisis News Roundup. In recent weeks, this column has focused heavily on the intersection between COVID-19 and the climate crisis, and that will continue as the pandemic sweeps through the world. But climate change and the politics of surrounding this monumental issue are still happening outside of the context of COVID-19, and we will use this space to tell those stories too.

If you have a story you think deserves a spot in the roundup or story pitches in general, get in touch with me at [email protected] or on Twitter at @SteveAHorn. You can read the previous edition here.

With little success to date, progressive climate activists in the United States have pushed congressional Democrats to adopt a Green Stimulus package in response to the economic crisis—and potential looming Great Depression—which has arisen in response to COVID-19. This has happened despite President Donald Trump showering the fossil fuel industry with various stimulus levers and environmental deregulation gifts.

According to a draft of the plan obtained by Bloomberg, the European Commission would offer 60-80 billion euros to incentivize the production and sales of electric cars, including doubling investment levels  in charging station networks for them. The commission would also offer 91 billion euros annually in grants to make buildings more energy efficient and thus, more climate friendly, while giving 10 billion euros to new renewable energy projects over the next two years. There would also be another 10 billion euros per year to go into a fund the European Investment Bank “to boost renewables and hydrogen infrastructure.”

The news comes as one of the EU’s biggest countries and its second hardest hit by COVID-19 from a public health perspective behind Italy, Spain, has proposed a ban of all new permits for oil, gas and coal. The country has also pledged to hit zet zero carbon emissions by 2050, while going 23% below 1990 greenhouse gas emission levels by 2030.

Spain has also proposed to use 25% of its annual budget, mirroring that of the European Commission, to go to the economic transition needed to respond to the climate crisis. And the country’s leadership has stated a goal of forging a just transition for fossil fuel industry workers, calling for the “approval of a transition strategy for communities dependent on fossil fuel industries for their livelihood every five years,” the UK-based outlet Climate Home News reported. The outlet added, “Specific transition agreements to promote alternative economic activities should be developed in affected areas.”

“At a time when we have to address the COVID-19 recovery process, the energy transition is going to become an important driving force for generating economic activity and employment in the short term, and in a manner consistent with what we will need as a country in the medium and long term,” Spain’s Vice President and Economic Transition Minister Teresa Ribera told Climate Home News of the plan.

Mijin Cha, a professor of urban and environmental policy at Occidental College and a proponent of a Green New Deal in the U.S. and a co-signer of a March open letter calling for a Green Stimulus, praised the EU developments.

“The EU is showing real leadership in pivoting towards a clean energy future that will be economically stronger in the long run,” she told The Real News. “The policies the EU are investing in are not just good for the climate, they are fundamentally jobs programs that will put people back to work quickly.”

Pointing to the Democrats and their response to the COVID-19 economic crisis, with 38.6 million people having filed for unemployment since March, she added “it is really a missed opportunity not just because we also are in a climate crisis, but the way to put people back to work quickly and build a strong economy is through climate investments. Not only is it a missed opportunity, but the Democrats are ignoring the priorities of a majority of voters.”

The meat industry supply chain in the United States has reached a point of total crisis in the United States as COVID-19 has worsened. Slaughterhouses have become coronavirus hotspots for their workers, putting a damper on the industrial process of meat production and leading some animal agriculture production sites to find it more profitable to do mass killings of pigs by ”suffocation, drowning and shooting,” The Guardian reported.

COVID-19, in turn, has put the horrific practices and inhumane existence of the industry under the national microscope. In the midst of the daily stomach-churning headlines about slaughterhouses during the novel pandemic, a new study has also put the climate impact of meat production and consumption under the magnifying glass.

Published by scholars from the University of Michigan and Tulane University, the study funded by the environmental advocacy group Center for Biological Diversity has concluded that “replacing 50% of animal products with plant-based foods in the United States would prevent more than 1.6 billion tons of greenhouse gas pollution by 2030.”

In response to the initial Green New Deal proposal, conservative pundits and Republican Party apparatchiks bemoaned that the plan means the end of eating cheeseburgers as we know it. Though the Green New Deal calls for nothing of the sort, and Democrats awkwardly addressed the issue in the June 2019 presidential debate, the talking point actually had some accidental truth to it.

The Center for Biological Diversity explained how diets must change in a press release summarizing the study: “If beef consumption were reduced by 90% alongside the 50% reduction in other animal products, it would prevent more than 2 billion tons of greenhouse gas pollution,” they wrote. “That’s roughly equivalent to taking nearly half the world’s cars off the roads for a year.”

The Real News has previously covered the climate impacts of the meat industry, and the climate movement’s reluctance to discuss it, interviewing the people behind the documentary film “Cowspiracy.”

In addition to the study, the Center for Biological Diversity has released a report titled “Appetite for Change: A Policy Guide to Reducing Greenhouse Gas Emissions of U.S. Diets by 2030,” which lays out practical steps individuals, the federal government, state government and local governments can take to radically reduce meat production and consumption.

Trump: Worst Ever on Public Lands

A new analysis published by the Center for American Progress has put forward a bold thesis: President Donald Trump is the worst president on protecting U.S. public lands in history. And it’s not even close, sitting as the only commander-in-chief in history to remove more public lands from protection than vice versa.

The Center for American Progress wrote that “over the past three years, the Trump administration has attempted to remove protections from nearly 35 million acres of public lands—approximately 1,000 times more land than his administration has protected.” The group added that though many of these proposals face court battles, “these actions equate to stripping protections from an area the size of Florida.” 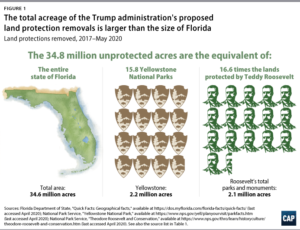 These maneuvers, first and foremost, are in the service of industrial interests. CAP names logging, various types of mining and oil and gas drilling as center to many of the proposals to gut federal lands designations. The proposal to build a U.S.-Mexico border wall, too, is cited as having “damaging effects on America’s natural and cultural heritage,” including bulldozing through “150 miles of the Organ Pipe Cactus National Monument and the Lower Rio Grande Valley National Wildlife Refuge.”

In addition to the attempt to strip away public land designations, Trump has leased off more than 24.4 million acres of public lands to the oil and gas industry. The administration is also attempting to open and remove protections from 1.5 billion acres of U.S. oceans, which is 94% of U.S. offshore waters and roughly three times the size of Greenland.

This is not just a story of ecological devastation of public lands, though, because it also links straight to the climate crisis—and COVID-19. Scientists have linked the wiping out of natural habitats of species to increased risks of spreading global pandemics. The process of climate change, too, further devastates ecosystems and biological diversity. Doing industrial activities like oil drilling, extractive mining and logging on designated public lands that preserve biodiversity, then, is a threat multiplier times infinite.

Lastly, a bit of levity. This week, our new climate reporter Aman Ahzar released a new multimedia package on the ClimateMusic Project. Aman interviewed several people who practice the craft, asking them why they do what they do and how they do what they do.

Via artistic practice that is above my pay grade and experience, one music composer and educator he interviewed actually wrote a “science-guided” song titled “Icarus in Flight.” That piece uses “environmental datasets spanning two centuries,” Aman wrote in introducing his video interview with Richard Festinger.

Festinger told The Real News that in writing “Icarus in Flight,” he wanted to “emotionally convey the problems that climate change poses and motivate people to take action.”

San Francisco’s Telegraph Quartet recently performed “Icarus in Flight,” a 30-minute composition, for the 50th anniversary of Earth Day. They did so in a virtual event convened by the the National Academy of Sciences, with Aman also speaking to the members of the quartet.

If you missed it, the package is titled, “Climate Music To Soothe And Terrify You.” Check it out and do watch all the interviews.

Steve Horn is a San Diego-based climate reporter and producer. He was also a reporter on a part-time basis for The Coast News—covering Escondido, San Marcos, and the San Diego North County region—from mid-2018 until early 2020. Also a freelance investigative reporter, his work has appeared in The Guardian, Al Jazeera America, The Intercept, Vice…